Our Reflection in The Black Mirror

Hello friends, this week at the Banana Stand the topic is Scott Snyder, Jock, and Francesco Francavilla’s fantasic run on Detective Comics with The Black Mirror.  This is one of my favorite Batman stories, and there are a few reasons why that I’d like to discuss.  The story and it’s structure, the rotation of two amazing artists, and the bittersweet aspect of it being Dick Grayson’s last great hurrah under the cowl.  I think those three aspects really separate this tale in my mind, and are the biggest factors in making it easy to go back and re-read it after it ended nearly three years ago. 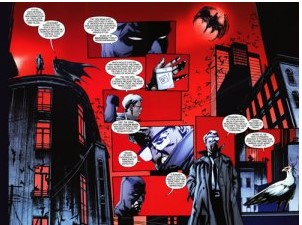 This was the auspicious debut of Mr. Scott Snyder in the Batverse, and boy did he ever make an impression.  The story itself is wonderfully creepy, and it was a welcome injection of horror into a Batman story.  The true brilliance of it all wasn’t completely apparent until it’s conclusion, but Snyder and company had me so enthralled the whole time that I didn’t think to ponder beyond the case to case, issue to issue format.  By jumping back and forth between Dick’s crime-fighting and Gordon’s personal turmoil, there was never a dull moment.  One of the things I really enjoyed was Snyder’s approach to writing Dick as The Batman.  He did a great job noting the differences between Dick and Bruce, without knocking us over the head with it.  Touches like his rapport with Tim Drake, or his not disappearing on Gordon mid conversation, were handled really well.  The fact that Dick would enjoy nearly everything more than Bruce was also emphasized well; one-liners and smirks were bandied about, and it all felt organic, not forced.  It makes perfect sense that out of the suit Dick might have trouble adjusting to life as The Batman, but when donning the cowl he would relish the opportunity.  Call backs to his circus life were used effectively to give a sense of his state of mind and thought process, and his acrobatic abilities were on full display when stalking the streets of Gotham.  However, Bruce’s influence on how Dick handled things was very apparent as well.  His methods were effective, and he used his brain as well as brawn; he didn’t do everything exactly how Bruce would’ve, using the things he learned during his time as Robin and Nightwing when he needed them.  I think for me, this sense of excitement; with new problems and new solutions, worked really well to pull me in.  There was a wealth of possibilities for stories to tell with someone else protecting Gotham, and I found that so intriguing.  I have yet to read more than a few issues of Morrison’s version–don’t worry Pat, I plan on reading it all–so I don’t know how much overlap or difference there is between this and his stuff, but I enjoyed this take on Batman so much that I was kind of bummed when the New 52 announced things would start over.

Another big factor for me was the artwork, and how they chose to divvy things up.  Both Jock and Francavilla are ridiculously talented, but I thought the choice to divide them up and have each tackle a different aspect of the story was genius.  This played to both of their strengths, allowing each to flourish doing what they do best, as well as keep the issues coming out on a monthly basis.  An additional attribute of the art rotation was how it added an element of separation to things, I was convinced we were getting two stories for the price of one.  It was subtle, but it allowed Snyder to weave an interconnected tale without us–just me?–really knowing it.  I was so wrapped up in the individual yarns that I didn’t even consider things would be connected.  Francavilla was the perfect choice for Gordon’s noir journey down the Se7en like rabbit hole with James Jr., and Jock’s pages of Dick flipping through the city followed by a colony of bats, and his action sequencing were a wonderful showcase of his skills.  If the story had been done by just one of them, I don’t think it would have been nearly as effective; no doubt it would still have been awesome, but the art’s role in keeping us in the dark can’t be understated.  Some of you sleuths out there may have figured things out, but I was caught completely off guard when the entire web was revealed to us in the finale.

This was the story that lead the suits at DC to hand over the reins of Batman to Snyder, and between this and the last 3 years of Batman proper, no one can argue against that choice.  While I do wish that we could’ve continued seeing what Snyder was going to do with Dick Grayson, I can’t complain too much, seeing how well he has done with Bruce.  I think what Snyder did structurally and thematically with The Black Mirror was superb.  On the surface it’s a tale like many we’ve read before in Detective Comics and Batman proper; there’s a new criminal element causing problems for the people of Gotham City, and it’s up to the Dark Knight and the GCPD to put a stop to it.

Though underneath the superficial plane is a tale of identity; how we all wear masks of some sort, and what their function is for us as a society.  Dick knows what he’s doing is right, but that doesn’t make him any more comfortable assuming the mantle of The Batman, or making decisions for Wayne Enterprises; still he pretends, he puts on whatever mask fits the situation he is needed for, and does what is required. However, as James Jr. points out, he can’t hide that smile, his true nature shines through even when he’s doing his best to fake it; he cannot deny his joy, staring right in the face of danger. Also, Joker being able to tell that Dick was under the cowl was fantastic, calling him little bird, what a creep! What a great intro to Snyder’s version of the Clown Prince.  Heroes running around dressed as bats, fighting crime, while technically committing it at the same time through vigilantism.  Fathers pretending to understand their sons, and doing their best to maintain love and deny the evidence, even when their own children terrify them.   James Jr. mentions how he is wrongly branded crazy, and in fact it is the rest of us who are nuts.  We tell ourselves the good we do is for the betterment of society, but deep down, we do it because it’s better for ourselves first, and society second.  We smile to others’ faces, and scowl at their backs, keeping up appearances, and pretending it’s all right.  I’m sure we all know James is wrong, and he is definitely the crazy one, but I love it when a villain makes enough of a point for me to ponder it a bit.

When a point of view is presented that I hadn’t thought of, even if I can prove it wrong after some thought, it’s that moment when I question myself or my motives that makes me appreciate the way other peoples minds work.  Often the rationale of a villain is threadbare at best, but instances like this one, when there’s a shred of truth to their madness is such a joy to read.  It’s indicative of a writer who really gets it, and has something to add to the collective narrative of a character like Batman or Jim Gordon.

So those are my thoughts, I hope you’ll all regale me with your opinions in the comments.  Did I miss anything? Were my points valid, or misplaced? What do you, NBC! faithful, think about this week’s Banana Stand? Be sure to let me know, and thanks for reading!