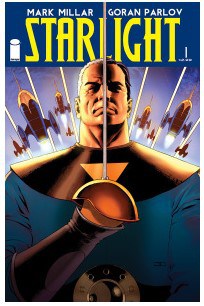 The Poignancy of Starlight

My experience with the writing of Mark Millar has been, shall we say, mixed. I read his Marvel event Civil War in trade and was swept up in the widescreen, action-packed morality tale. Not content to wait for future collections to see what happened next, I returned to the weekly comic buying habit for the first time in a decade. Soon after that I read his mini-series Marvel 1985, which remains my favorite of his work. Operating on both a smaller and larger scale than Civil War, 1985 is suffused an emotional warmth which, I would soon discover, is often absent from Millar’s writing.

Fantastic Four was one of the first titles I started buying post-Civil War, so the announcement that Millar was taking over the series excited me; the issues themselves disappointed. I read Old Man Logan and the first volume of Kick-Ass, thinking that both started strong with intriguing concepts only to ultimately collapse into gratuitous violence.

At this point I began to wonder if series like 1985 had been a fluke. I stopped pulling new titles by him.Then last year I started hearing loud buzz for Starlight, its fans proclaiming that it is not typical Mark Millar. I was curious. Recently I had the opportunity to read an advanced copy of the series trade, and was quite pleased to discover that its proponents were correct: Starlight is the best thing that Millar has written in years.

The narrative centers on Duke McQueen, former Air Force test pilot, now retired. As a young man, Duke was sucked through a wormhole and found himself on a strange, alien world called Tantalus. Once on Tantalus, Duke engages in a series of adventures centered on freeing the planet’s population from their cruel dictator Typhon. Ultimately Duke triumphs. For his efforts he is richly rewarded, even offered the opportunity to become consort to the queen, ruling the planet alongside her. However, Duke declines all entreaties to stay; his beloved Joanne is back on Earth. He could never settle anywhere without her.

Throughout the first issue, Millar weaves these flashback sequences on Tantalus with the present day. Duke returned to Earth, where no one believed his tall tales, except Joanne, which in the end was all he needed. And so the years went by. The two marry, settle in Vermont, and raise two sons. More time passed. Now Duke is waking up and dressing himself for his wife’s funeral. Millar skillfully handles these scenes of mourning, striking the right balance between poignant and cloying. Duke stands in the church gazing at his wife’s coffin, failing to feel any reassurance in the priest’s consolations. Echoing his own words on Tantalus all those decades ago, Duke wonders how anywhere, even Heaven, could be paradise if he and his Joanne are apart.

Duke is a man cut adrift by death. His grown sons are awkward in his presence, preoccupied with their own jobs and families. Young kids tease Duke with jokes at the old man’s expense (one constant of life is that Uranus puns never go out of style). Through it all, Duke is resigned, used to these slights as the natural order of things. Children need to make their own way that is par for the course. Even the refusal of others to believe his stories about Tantalus do not seem to faze Duke. Joanne was his rock through it all, and now she is gone. In these scenes, Millar taps into universal emotions, creating some of the most heartfelt scenes of his career.

Starlight is more than simply the tale of a man reminiscing about his life, however. One rainy night, his swashbuckling past returns in the form of a ship from Tantalus. A young boy emerges, begging Duke for assistance. Years of peace had lulled the citizens of Tantalus into a false sense of tranquility, making their planet easy prey for would-be conquers. The queen has been killed, her throne seized by a new vicious tyrant named Kingfisher. The boy Krish Moor begs Duke to return to Tantalus and once again lead the resistance to victory. At first, Duke is understandably hesitant. What use is a man his age in fighting armies? Yet, in the end, he goes along with Krish, journeying back to Tantalus.

Millar invests the Tantalus sections with an old-fashioned pulp flair. For the most part, he avoids the sensationalistic gory set-pieces that have marred his work in the past. Instead, readers are treated to exciting action sequences involving an engaging cast. Goran Parlov follows suit with his art for the series. His design work has a classic, space-age science-fiction vibe to it. The sleek lines of Krish’s spacecraft mirror those of a ’72 Mustang seen later in the story. There is also a strong Moebius influence in these pages, most noticeably in the clothing of the planet’s commoners. Yet, despite these frequent visual homages to the past, Millar and Parlov craft an entertaining narrative which feels distinctly their own.

Starlight is comic filled with both a poignant acknowledgements of time’s passing, as well as a thrilling adventure tale. There is even a bit of environmental allegory in Kingfisher’s ravaging of Tantalus’s natural resources. All in all, it is an excellent series which easily ranks among Millar’s finest work.