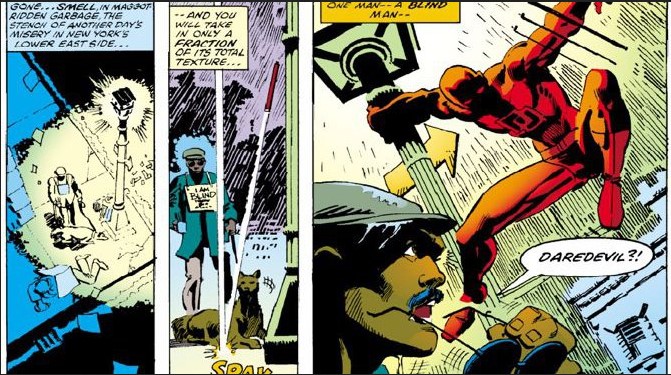 Necessity, it is said, is often the mother of invention. This has frequently been true of the comic book publishers, such as Marvel, where sagging sales have given creators the freedom to experiment. In the 70s, Jim Starlin took second-string characters such as Adam Warlock and Captain Marvel and produced some of the most iconic cosmic tales in Marvel’s history. Then in the 90s, Starlin was handed the declining Silver Surfer series, which he remade into a fan favorite as well as launch pad for Infinity Gauntlet, one of the most popular events the company has produced. Before Len Wein and Chris Claremont reshuffled the line-up of X-Men, the title was selling so badly that it had been given over to reprinting earlier issues. One of the most famous and influential of all these reimagings, though, is the one given to Daredevil by Frank Miller. Long on my to-read list, I recently read a large chunk of the run (#168-#182) and was quite impressed.

Frank Miller was in his early twenties when his first smattering of comics work was being published. These low-profile assignments brought him to the attention of Marvel’s Editor in Chief, Jim Shooter who hired Miller. As a young, if promising, talent Miller found himself assigned fill-in stories. He had to ask Shooter for his first regular series: Daredevil. Miller got the job. It was not a prestigious post though as the title was continually flirting with cancellation. Still, Miller felt an affinity for the character; he simply needed editorial support for it. That arrived in the person of Dennis O’Neil who assumed editing duties for the series. Seeing promise in Miller as a writer as well as an artist, O’Neil got rid of current writer Roger McKenzie. Starting with #168 Miller was author and artist of the title. By #171 the series was so popular that Marvel bumped its publication schedule back up to monthly.

The fact that the book became so well-liked so quickly is hardly surprising, as Miller’s work is strong right of the gate. Miller has remarked that when he was first shopping his art around publishers, it was met with confusion. Why was he drawing all these fedora and trench coat types? Where were the superheroes? In Daredevil, Miller saw the opportunity to blend together the two genre, as well as tossing martial arts into the mix. Miller’s Daredevil is clearly a superhero comic, whose protagonist has special abilities and frequently battles costumed criminals. At the same time though, Daredevil spends just as much time tangling with low-level punks engaging in everyday crime. Miller borrowed The Kingpin from Spider-Man and placed him at the center of New York’s criminal organizations. The result was that Daredevil’s primary antagonist was not some cackling, four-color fiend, but a ruthless, coldly calculating mob boss.

Miller’s use of The Kingpin is a perfect example of how quickly and thoroughly he put his stamp on the series. While Wilson Fisk may still cause occasional trouble for the Web-Slinger, fans think of him first and foremost as Daredevil’s archenemies. Much of this has to do with how well Miller writes the character. Miller’s Fisk is a fascinating mixture of cruelty, good intentions, tragedy and cunning. Miller gradually builds the conflict between the two men, each of them taking small victories along with larger defeats. Both are more than capable of fighting for what they want, as well as smart enough to back off when the odds are against them.

Miller demonstrates strong character work throughout the series. Two of the stand-out issues are #178 (“Spiked”) and #181 (“Last Hand”). In each of these, Miller gets inside the head of one of the supporting characters, revealing how they view the world. In “Spiked,” readers follow reporter Ben Urich as he tries to tie mayoral frontrunner Randolph Winston Cherryh to The Kingpin. Urich is just a good man, doing good work. No special powers or training beyond what he picked up from his street beats. He loves his wife, yet his dedication to his job, and by extension to the people of New York, keep pulling him away from her. Even if I had never read a Ben Urich story before this one, I would have instantly become a fan of his, which makes the cliffhanger last page even tenser (Miller’s layouts as always are thrilling).

“Last Hand” is arguably the most iconic Daredevil issue Miller ever wrote. A double-sized installment, it features, Bullseye and Elektra’s fatal bout, as well as the fall-out with both Daredevil and The Kingpin. It is full of dramatic action and character beats. However, what truly raises it to the next level is the chilling narration provided by Bullseye. Miller’s achievement is the ability to portray Bullseye’s madness without it fully overwhelming every other aspect of his personality. The result is a villain who is even more chilling, as he continues to plot his revenge, regardless of the disadvantage circumstances forced upon him. Daredevil was already a compelling read before #181, but that chapter is a true page-turner.

All this excellent story-telling is strengthened by Miller’s dynamic art. Miller’s interest in noir elements carries over into the visuals, where he borrows the genre’s fondness for long shadows, skewed angles and dramatic lightning. Multiple colorists worked with Miller on Daredevil, the most talented of which was Klaus Janson. Janson inked all of Miller’s pencils, taking on more responsibility as the series progressed. In order to meet deadlines, Miller increasing sent-in breakdowns instead of fully penciled art, trusting his collaborator with the finished product. Yet, the vigor of the art never fades, as Miller’s page layouts are consistently striking. Miller’s designs show the influence of Will Eisner, especially in his clever title pages. The clear, exciting martial arts flavored fighting sequences also suggest debt to Neal Adams. At the same time, Miller, along with Janson, combine these influences into something that is fresh and distinct.

All these years later, it is easy to see why Miller’s work on Daredevil was such a huge success. These issues have barely aged, reading just as compellingly as they must have been nearly 35 years ago. What the passing of time does allow, though, is the ability to fit this work into the larger arc of Miller’s career.

Miller did some other work for Marvel, most notably illustrating Chris Claremont’s Wolverine mini-series that contributed to making Logan the superstar he is today. However, for the most part, his contributions to the House of Ideas are limited to Old Horn Head and his companions. The chance to branch out further was waiting for him at DC, along with O’Neil who had returned to the Distinguished Competition. The results were two of the most important Batman stories ever: The Dark Knight Returns & Year One.

One of the fascinating things about reading Daredevil now is how many traits it shares with Batman. Daredevil may have superpowers that Batman lacks, but they largely act as a counter-balance to his blindness. As far as physical prowess goes, he has the same potential strengths and weaknesses as anyone else. Both heroes patrol urban environments which are often portrayed as hopelessly corrupt. Miller’s tendency to shy away from the larger than life villains, is reflected in Year One, which shares Daredevil’s concern for street level organized crime. Most prominent though is Daredevil’s dilemma over Bullseye.

Early in Miller’s run, Daredevil is given the chance to let Bullseye die. They have been fighting in a subway tunnel, and the defeated assassin is lying helpless on the tracks. Daredevil could let him be run over by the approaching train, thus ensuring that Bullseye will never kill again. He doesn’t though. His conscious could not bear it. A human life is still a human life, no matter how twisted. It is a decision that comes back to haunt Daredevil in a very personal way. Yet, even then, he remains conflicted about his actions. This quandary mirrors the one faced by Batman every time he faces down The Joker. At what point does he share some of the blame for the madman’s actions? Is cold-blooded murder ever justified? Over time, Miller’s thoughts on these subjects would shift a bit, however, here he is still very actively exploring difficult greys of moral ambiguity.

Miller’s Daredevil is an essential step in the evolution of the medium. Picking up where creators like O’Neil and Adams left off in the 70s, Miller further darkens the landscape on his way to Dark Knight/Year One, which would in turn largely contribute to the rise of the “grim and gritty” heroes who would dominate the industry through much of the 90s. (Some would argue that they remain overly prevalent to this day). However, more noteworthy than the “importance” of these issues is the simple fact that they remain enjoyable, outstanding comic books. Not bad for a guy in his mid-20s who had never before written an on-going series

As I said, sometimes the series which has the least to lose is the one willing to take the biggest chance.