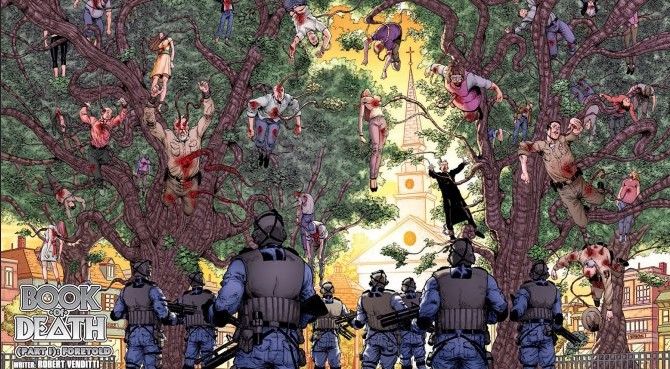 Advance Review of Book of Death #1 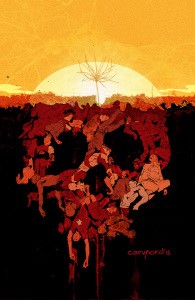 This week, Valiant launches their summer event Book of Death. The plot pivots on the status of Geomancers, those individuals selected to be the voice of the Earth. In the recent series The Valiant readers witnessed the death of Geomancer Kay and the arrival of Geomancer Tama from the 41st Century. She has brought with her The Book of the Geomancers, which contains not only the grim fate of humanity, but also the individual ones for the heroes of the Valiant Universe. Valiant has teased that these various “Falls” will be revealed as part of the event.

This idea of revealing the future of the Valiant Universe has precedent. In 1992, the original Valiant did something similar. They had just completed their first line-wide crossover, Unity, and decided to offer their readers a glimpse into what might happen next. They released Rai #0 which told the story of the Valiant Universe from the present moment into the 41st Century. Along the way, the heroes continued fighting, some giving their lives in the process. Others simply succumbed to the passing of time. The immortal Armstrong disappears from recorded history, unable to handle his grief for the fallen Archer. It is a bold, sweeping feat of storytelling which holds-up over two decades later. (Jim Shooter, David Lapham, Bob Layton and Jon Hartz plotted the issue; Layton handled the script, while Lapham did the pencils).

Flowing throughout was the issue’s namesake “The Blood of Heroes.” Opening with Bloodshot (in his first full appearance) being awaken and freed from Project Rising Sun by the Geomancer, Rai #0 traced how Bloodshot’s blood became a sought after commodity especially by Toyo Harada in his thirst for immortality. Eventually the blood comes to rest in Asia where it is used to create the series of guardians known as Rai. The issue ends with the Geomancer of 4102 using the last of the blood to create one final Rai to replace the one who died during Unity. In such a way, the team of writers create not just a history lesson, but one which connects the unfolding events of the present to those of the future. It is justifiably remembered as one of the best single issues the original Valiant produced.

Given this legacy, Valiant’s new Book of Death has much to live up to. Based on the first issue, though, the Event is off to a strong start. As stated above, the plot centers on a crisis involving the Geomancers. The Geomancers are traditionally forces for good, seeking to maintain the balance of life on the planet. However, recently there have been outbreaks of horrific violence. Most recently, the entire town of Ashlee, Wyoming has been slaughtered, residents found brutally impaled on tree limbs. At each of these occurrences Geomancer Tama has been spotted along with her protector Gilad. Colonel Jamie Capshaw, head of GATE and government liaison to meta-humans, has run out of patience with Gilad. She wants this rogue Geomancer brought it and now.

Meanwhile, Gilad is protecting Tama, keeping her safe from not only his former Unity teammates but also from the true source of the massacres. According to Tama’s Book of the Geomancers, the dark times for Earth began in the aftermath of Kay’s death. Instead of a new enlightened Geomancer following in the footsteps of their predecessors, there arose a corrupted, evil force. This force moved swiftly, spreading destruction, while easily swatting aside any resistance. As Tama reads from her book, Venditti gives readers a glimpse of an opposition full of familiar (and couple not so familiar) faces. These panels contain intriguing cameos by various characters. Leaving the reader quite curious about how they will all fit into the larger narrative.

In Rai #0 the threat which stretched over the decades was Toyo Harada’s mad quest for power. This time it is a damaged Geomancer named David, though, he is not alone. There is another mysterious figure manipulating him from the shadows. This presence is the series’ true antagonist. His identity remains unknown at present, though, I do have my suspicions. It has been awhile since readers have heard much from one of the Valiant Universe’s most fearsome adversaries.

Venditti does a great job of laying the ground work for the Event. Braitwaite illustrates the future scenes with a dynamic punch. He mixes thrilling action with sweeping panoramic views of the aftermath (mostly barren landscapes littered with corpses). These are alternated with quieter moments of reflection (a couple with their newborn, a man isolated by his own dream), which only heighten the drama. There is very much a sense that everything is at stake. This feeling of urgency is carried over to the contemporary sequences illustrated by Gill. David is able to turn Tama’s own sense of security against her. Ants and scorpions swarm about her and Gilad, overwhelming them. The Earth is no longer their friend, but their enemy. Indeed, a feeling of distrust runs throughout issue. Once Colonel Capshaw withdraws the support of GATE, Gilad is left unable to trust even his own teammates in Unity. Everything is breaking apart.

Overall, this is an exciting launch for Book of Death. One of the keys to the success of the Valiant relaunch has been acknowledging the past, while also transforming it. The best example would be Unity which emerged in the 10s as something entirely different from what it was in the 90s. Still, the connections remain. Book of Death promises to continue that tradition, while, most importantly, telling a compelling story. 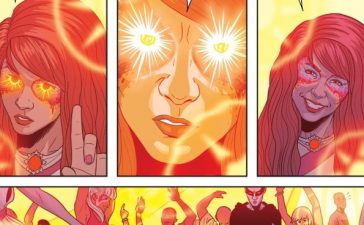 This Week’s Finest: The Wicked + the Divine #28