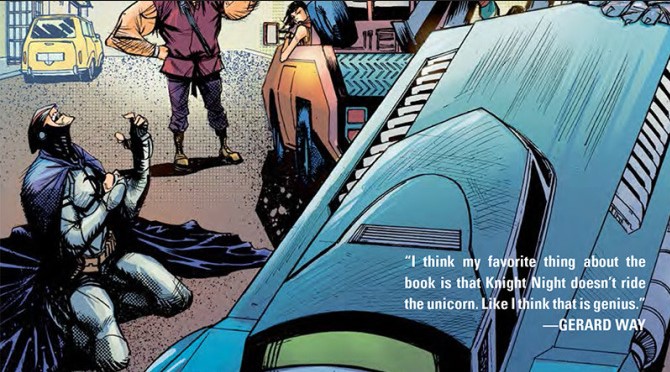 Advanced Review of The Paybacks #1 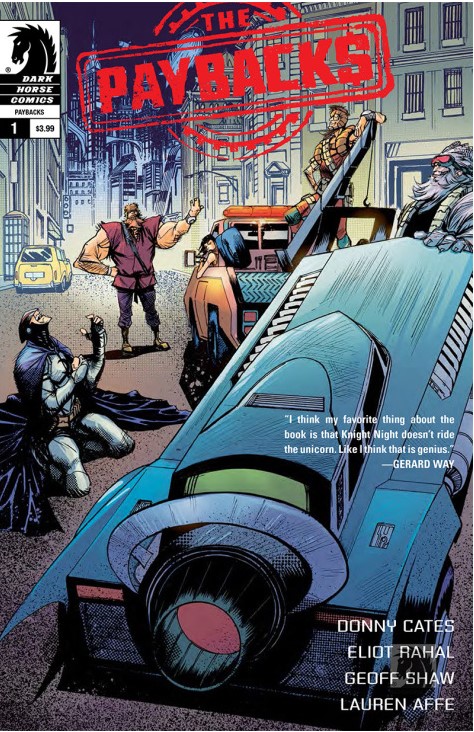 After investigating the break in at the house of the superhero, Tight Squeeze, this journal entry was found ripped out and placed on the table. As if intentionally left behind.

No sin will go unpunished. No debt will go unpaid. They caught the old man. I can only assume I’m next. Night Knight was the best of us. He single handedly put away the Malice Phallus and Blunt Force Trauma. Okay, well maybe he had a little help from yours truly, his trusty sidekick. But I have moved on and he still is one of the greats. I hear he was closing in on the Reflector after months and months of smashing mirrors. But The Paybacks, those bastards, got to him first. If only Night Knight would actually ride Knight Mare he might have had a chance to escape. Stupid old man thinks it’s cruel to ride his steed. “Did I get on your back and ride you when we were partners?” He always says to me. I guess that’s a good point, but what use is a horse as a sidekick if you don’t ride him? I always wondered how the old man could afford that kick ass lair and all those gadgets. I know he owns one of the biggest companies in the city but the guy is never at work, how well could they actually be doing? Also, where did he get that fucking Dinosaur? Never guessed him for one to take out a loan and not repay. He should know you can’t fuck with these guys. Once you start missing payments those Paybacks are gonna be on your ass quicker than the next version of Windows needs to be patched. Which is why I’m looking over my shoulder these days. I wanted to get away from the old man’s shadow, be my own hero. Enough of the kiddy sidekick name and listening to orders. I ventured out on my own. A new city, a new name, a fresh start. Fresh starts don’t come for free though. I needed to take out ten grand for a cool suit and some cool looking weapons. They aren’t all that practical but the key is to look cool so that kids buy your toys action figures. That is where I expect all the money to start rolling in from. Well, I guess it’s because I am new, but Tight Squeeze action figures don’t sell so well yet. So, I haven’t paid a single dime of the loan. I think those fuckers are coming for me next. It doesn’t even matter who they send, I’m dead no matter what. I can just pray they don’t send Miss Adventure, then I’m actually dead. That bitch is crazy. Skisquatch might be my best chance at survival, only because I throw a killer party. It is the perks of being a young superhero, all the men want to find out who is underneath the mask and all the babes want to find out if those tights are stuffed. I would have no chance if they send The Soviet Nunchuck. You can’t reason with that guy. It doesn’t matter what you say he answers in a movie quote and then knocks you out. Whoever it is they send, I’m sure Driver will be with them. What kind of name is Driver, for the guy that drives the team everywhere? I’ll tell you one thing though, don’t ever say that to him. You know that punk Arachnid Kid? The one who is always lipping to everyone, I heard he made fun of Driver’s name and with the blink an eye Driver ran him over with his van…without even being in it. Oh man! I am so screwed. What started off as a regular journal entry has turned into my famous last words. If you are reading this then I am either dead or I have joined the team. I have 7 words of wisdom before I go. Watch out for the mother fucking Paybacks!

The Paybacks #1 is extremely smart and fun. Donny Cates and Eliot Rahal have not just made a humorous comic with enjoyable characters, they have crafted a witty and adventurous world for their clever characters to inhabit. While Geoff Shaw and Lauren Affe work seamlessly as the art and colour team, taking on a tone similar to Sean Murphy. With visible rough, yet clean pencil lines to create animated facial expressions while a page later pencilling an action filled fight scene.  Colours popping at every turn of a page.

Make sure you pick up this comic when it hits stores on September 16th.