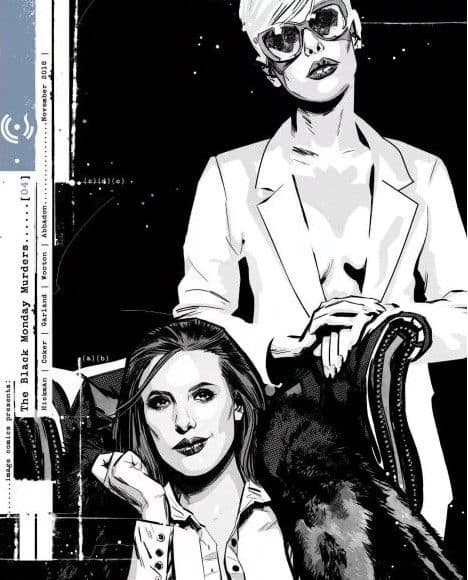 Review of The Black Monday Murders #4

What is the role of ritual, specifically religious ritual, in society? Regardless of the beliefs behind the actions, is there something inherently soothing in such ingrained ceremonial motions? In the first issue of The Black Monday Murders, wealthy financier Daniel Rothschild was murdered. Four issues later, the series’ initial arc concludes with Daniel’s funeral. #4 is full of religious imagery, yet, for what purpose? Is there something within these formulas which soothes the soul of Daniel’s twin sister Grigoria? Such questions add new layers to Black Monday Murders, which from its debut has proven to be one of the most fascinating series of the year.

The central strand of this installment of Black Monday belongs to Grigoria. She is a decedent of the Rothschild, a family with deep roots in finance and other ancient, arcane matters. Writer Jonathan Hickman’s concept for the series ties the market manipulations of Wall Street (among other global commodity centers) to literal dark magic. The Rothschild are one of the select few families who share both the wealth of power and the cost of crashes. Just as Hickman’s East of West has an epigram in the phrase “You have earned what is coming to you,” Black Monday repeatedly evokes the language of payment for debts. For example, the family’s death announcement for Daniel prominently proclaims “His Debt Is Paid.” This phraseology has deep significance for the cabal families. The God Mammon is a fickle deity (is there any other kind?), who reserves the right to reverse fortunes and when this happens there is more at stake than material luxuries. As stated, the cult of Mammon is an ancient one, which still adheres to olden ways of human sacrifice. Despite all appearances to the contrary, the power of the Rothschild and their ilk is not limitless, even if those checks belong to a sphere far outside mortal influence.

With this in mind, it is intriguing how ritual plays out in the wake of Daniel’s death.  The service is presided over by a cardinal, representing The Black Pope. There is the suggestion that this religious order, which like the Roman Catholic Pontiff, is based in Vatican City, functions as a mirror image of the more recognizable denomination. This is immediately apparent in the choice for both the pope and the cardinal to be females. However, what is more interesting than these cosmetic differences are the similarities. The cardinal projects a serene presence; her words offer consolation. “ . . .this is the end we all face . . . we wager, barter, and steal in the hopes that we can buy ourselves a little more time, but in our hearts . . . we know.” Again the imagery of debt collection is invoked. Yet, strip away the jargon specific to this congregation and her sentiments are those recognizable from many a religious tradition. We belong to an unbroken chain, stretching forwards and backwards; these are the bonds which secure our success. Occasionally outside forces disturb the waters, blood is spilled (and such transgressors will receive the wrath their debts warrant). However, continuity remains. “What is lost will be lost for only for a time. The new replaces the old. The cycle continues.” Ashes to ashes. Dust to dust.

The cardinal’s words might be meant to sooth the spirit, however, there is much angst roiling through the congregation of The Church of the Redeemed. (The Biblical imagery of a Redeemer is rooted in the courthouse, Job was thinking of a lawyer/advocate when he pledged faith in a redeemer; still, the suggestion of redeeming debts cannot be avoided). Grigoria’s childhood was marked by upheaval. She was taught at a young age that the bonds of family were not sacred. “Whenever possible,” her grandfather taught, “it’s best to eat your own.” And so one day many years later, Grigoria comes across Abigail, the Rothschild familiar, gorging herself on the grandfather’s body. At first Grigoria is overwhelmed, frightened by the grisly sight. Then, her eyes narrow as the truth of her grandfather’s words occur to her for the first time. The bottom panel depicts Grigoria’s outstretched arm reaching towards Abigail’s. Coated in dark blood, the hand slightly limp at the wrist, the panel evokes the imagery of Michelangelo’s The Creation of Adam from the Sistine Ceiling. In this moment, Grigoria is truly born into her birthright with a blood sacrifice, as Abigail is reborn as Abby, rededicating herself to a new generation of family service. Again, the ritual is sealed with a sacrificial victim. Also, it is noteworthy that Hickman selected the Roman Church for the religious iconography of Black Monday; Catholicism has a long, potent history of its own with revering the power of blood. Take this and drink of it. It is shed for you, so that sins may be forgiven . . .

This sequence also serves as a reminder of how well Tomm Coker’s art suits Hickman’s scripts. The first view of the scene is given a distorting perspective. The reader looks up at Abigail kneeling on the ground, back facing the reader. She is naked but not rendered in a way that is immediately titillating. Instead there is an aura of horror. At the bottom of the page, the familiar raises her head, fangs bared, blood streaming down her chin. At this moment, she appears more a beast than a person. Yet, as Grigoria’s acceptance of the scene shifts, so does the reader’s. Coker subtly hints at a whiff of sensuality sparking between the two characters. This is reinforced by how Coker transitions from the panel of outstretched arms to a close-up view of Grigoria and Abby holding hands at Daniel’s funeral. Whatever bond was forged that night at the Rothschild estate continues many years later. All of these atmospheric suggestions are ably highlighted by Michael Garland superb coloring. His play between light and dark hues is key to both the sense of dread and release which flow throughout this book.

In the end, the question remains how useful many of these rituals were for the grieving Grigoria. Once she has completed her role in the ceremony, she bids farewell to the other mourners with a curt dismissal. The cardinal may preach unity, but, as always, the realities of life mar religious idealism. However, there is one final ritual left for Grigoria to perform. Whether it provides closure or reassurance is an open question. Yet, within the rising flames (again so evocatively rendered by Coker and Garland) there is the hint of catharsis. Perhaps, in the end, that is all to which these actions ever amount? Their only meaning is whatever the participant brings to it themselves.