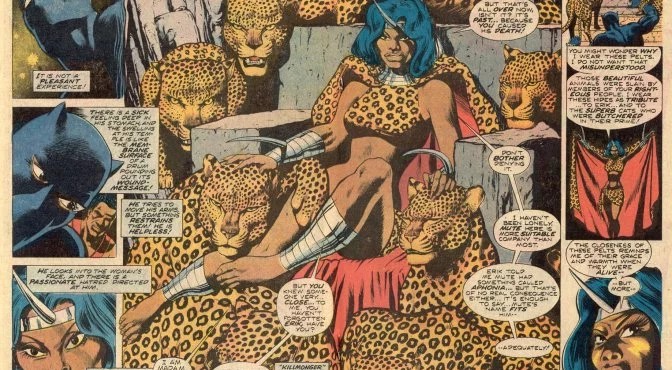 The Black Panther first appeared in a 1966 Fantastic Four two-parter (#52 & #53). Not long after that (1968) he joined the ranks of Earth’s Mightiest Heroes. Black Panther’s time with the Avengers raised his profile, yet, also largely ignored one of his most prominent features: being king of Wakanda. Other superheroes in the past had either been monarchs or had ties to them, most famously Princess Diane, daughter of the Queen of the Amazons. The overlap between Wakanda and Themyscira is intriguing, as they are both technologically advanced cultures created and maintained by minority populations. In his original Wonder Woman stories, William Moulton Marston used Paradise Island as an example for what human civilization could aspire to being, if only women were allowed to live to their full potential. Similarly the scientific glories of Wakanda represent what African minds can achieve when free from the bonds of oppression. Unlike Wonder Woman, this concept was dormant throughout T’Challa’s earliest adventures. His Avengers period kept him in New York, far removed from the tribal politics of his homeland. It was not until the Panther received his first solo stories that creators began tapping the full potential of Wakanda.

When Don McGregor requested the writing gig for Marvel’s Jungle Action, it was a struggling title, reprinting such gems as “With Fangs and Talons!” beneath covers of brawny white guy rescuing cowering white lady from some sort of exotic menace (usually a wild beast, though, spear tossing natives do popup in one instance). The year was 1973 and McGregor believed that Marvel had run out of excuses for publishing such dated material. As he explained at a New York Comic Con panel last fall, McGregor kept pestering editorial until they caved in and let him write his African title populated with actual Africans. They figured it would flop and they could then trash the whole endeavor with a clear conscious. McGregor never transformed the series into a sales sensation but he did keep the Panther’s solo tales going for three years (#6-24 with #23 being a reprint issue).

McGregor was the first writer since the initial Fantastic Four story to place T’Challa firmly the context of Wakanda. At the same time, he composed the cast almost entirely of Africans or, in the case of love interest Monica Lynne, those of African descent. The only “white” character to appear during the Panther’s Rage arc was Venomm, whose scarred albino features are constantly compared to those of a “freak.” The follow-up arc would take the Panther to Monica’s Georgian hometown where he runs up against the Klan. The only prominent sympathetic white character is a crusading journalist, Kevin Trublood, who, in a nice piece of satire, has a tendency to speak in self-righteous speeches. McGregor’s writing echoes many of the themes of Dennis O’Neil’s in that McGregor often refuses to resolve thorny themes in a tidy manner.

This is particularly clear in his treatment of war. The through line for Panther’s Rage is the civil unrest T’Challa discovers after his extended absence from Wakanda. Erik Killmonger (co-created by McGregor for this story) is stirring up dissent throughout the nation in the hopes of displacing the king. The major conflicts between Black Panther and Killmonger are spaced out throughout the arc, but, when their armies clash McGregor does not spare the collateral damage. His portrait of war is striking in its refusal to glamorize. The Panther may have right on his side but that does not make the violence any more admirable. Giving in to such primal instincts changes a person, often leaving them with a different personality. The arc’s epilogue ends not on a victorious note, but a solemn one:

He does not see the Panther’s amber eyes narrow as they comprehend that there is more tragedy here than anything else, and that all of them are hurt and bleeding and separated from each other by pain.

Such sweeping themes require similarly dynamic art, which was readily provided by McGregor’s primary collaborators for Jungle Action. The first penciler for Panther’s Rage was Rich Buckler who brought to the book a smooth sense of action. He favors large action set pieces with corresponding dramatic splash pages. Initially there is a hint of rote to some of the execution. This quickly changes with his second issue (#7). The chapter opens with a vertical double-page spread depicting the Black Panther tumbling down a waterfall. This sense of tension is mastered in the following installment which begins with a splash page featuring the Panther in a fight pose. Behind him a menacing figure crouches in the bushes while another assailant brandishes a sword from off panel. Before this tense scene can be fully resolved, Buckler leaps to a two-page title spread in which the mysterious Malice stealthily navigates herself from one letter to another, while the Panther battles in the background. Such striking layouts suggests that Buckler profited well from a close study of Jack Kirby and Will Eisner.

Following a fill-in issue (#9) by Gil Kane, art duties rotated to Billy Graham who penciled nearly all of the remainder of McGregor’s run. Graham had recently done some work on Marvel’s Luke Cage, Hero for Hire series, though that assignment consisted mostly of inking George Tuska’s pencils. Here the spotlight was his and he immediately took advantage of the opportunity. From literally his first page, Graham reveals dynamic, imaginative style. #10 opens with what could have been a straightforward sequence: a crocodile sneaking up on the pensive Panther. Graham sets the scene by a riverbank, which allows him to mirror the image of the hero struggling with the reptile in the bottom half of the page. Even the title of the issue is reflected (backwards naturally) in the waters. In addition, two panels repeat giving a sense of before (the crocodile approaches) and after (the Panther appears to gain the upper hand). Taken together Graham conveys narrative information in a manner which is both clear and striking. Indeed, the page’s flair for economical storytelling is reminiscent of Medieval stained glass.

Graham, however, was simply getting started. The plot of #10 centers on the Black Panther’s efforts to locate King Cadaver, one of Killmonger’s agents charged with sowing unrest throughout Wakanda. (McGregor’s Killmonger is a big believer in war through proxy). When Black Panther comes face to face with King Cadaver it’s a rather disorientating experience. Like Buckler before him, Graham has a knack for the dramatic two page spread. In this case, the Black Panther finds himself in a room where the walls are made of mirrors. This gives Graham the chance to play more fully with reflective effects as characters’ features reappear, often distorted, in the glass surfaces. This distortion is especially bewildering as King Cadaver himself has a grotesque appearance. His oversized head is dominated by huge bloodshot eyes and a prickly, callused scalp. His green skin suggest not simply a decaying corpse but that of one which was never human in the first place. (Coloring for this issue, as with the majority of the run, is by Glynis Wein). At Cadaver’s side is the tall lanky figure of Baron Macabre whose grey, sunken flesh visage readers were introduced to in the previous issue. Taken together it is a surreal vision which earns its place alongside the art of Jim Starlin and Gene Colan in the pantheon of 1970s Marvel trippy illustrations. Graham demonstrates a similar flair for the dramatic when introducing Madam Slay in #18. 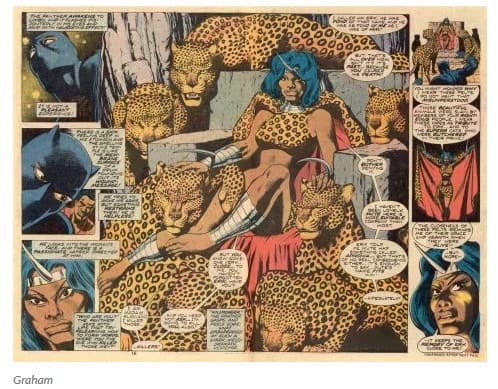 Graham’s stunning visuals are a hallmark of McGregor’s run and one of the reasons it remains so striking over four decades later. Like Buckler, Graham appears to have studied Eisner, often constructing elaborate title page designs, such as the one for #16 in which the evocative title “And All Our Past Decades Have Seen Revolutions!” is carved out of a rock face towering over T’Challa and Monica as they surf the tide on the back of giant sea turtles. As with any action sequence, Graham conveys a sense of energy to the proceedings as Monica proves herself quite capable of mastering the afternoon’s excursion. Afterwards the lovers stand together on the shore. For two pages, Graham nearly eliminates the grid, silhouetting T’Challa and Monica against a white background. He frames them with McGregor’s text and two panels of scenic nature, yet, the eyes of the reader keep drifting back to the couple dominating the page. It is a lovely sequence which highlights their devotion, along with the rare opportunities they have to express it in peace. 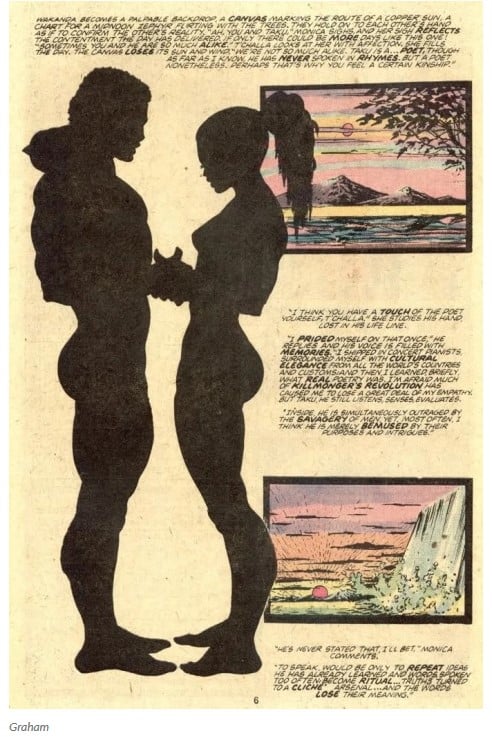 There is a long tradition at The Big Two of granting untested/rising creators carte blanche over ailing titles, as editorial figures “what the hell, it’s not like sales can get worse, right?” Arguably the best example of this is Frank Miller’s assumption of writing duties for Daredevil. However, such thinking also gave Starlin his first stab at a cosmic narrative and allowed Walt Simonson to romp freely through the Halls of Asgard. It benefited O’Neil and Neal Adams once with Batman then again with Green Lantern/Green Arrow. All of these runs are now seen as classics, though at the time, they were merely longshot experiments. McGregor’s Black Panther has never been allotted similar iconic status yet, its influence has only grown over the years. At the NYCC panel, later Panther creators from Christopher Priest to Ta-Nehisi Coates emphasized how important the Jungle Action issues were for them. As Steve Gerber wrote in a contemporary editorial, the Black Panther was different from Tarzan and Mongli and other quasi-colonialist jungle heroes of the past. T’Challa was no “abandoned child raised by apes or lions or armadillos or whatever” nor any “accidental visitor to this jungle paradise.” He is native born to the land. He is its king, leading his nation into a new age of progress. A hero and a country which could serve as an example to the world.

That dual journey would be neither smooth nor easy but McGregor, Buckler and Graham chronicled an essential chapter of its history. 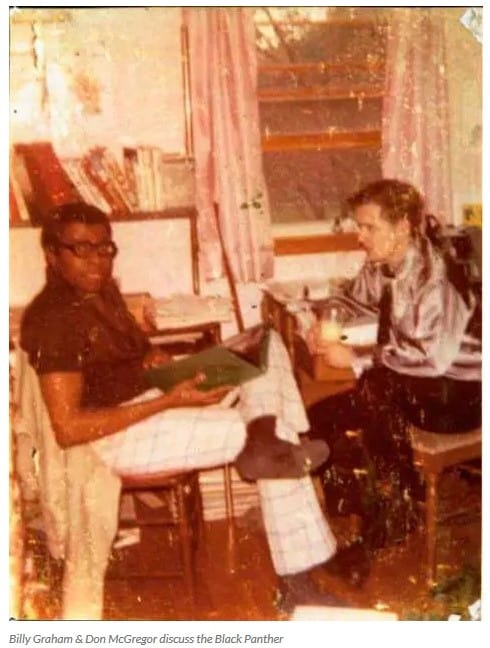