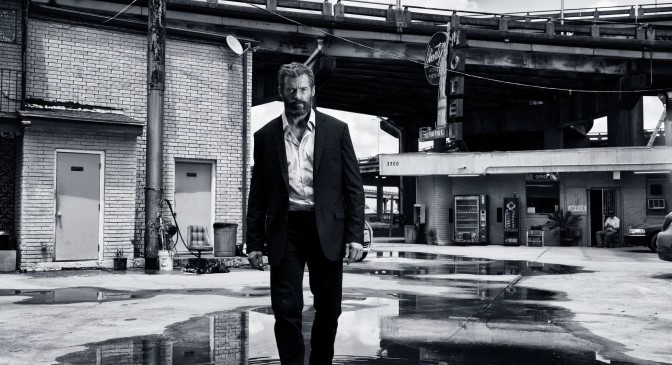 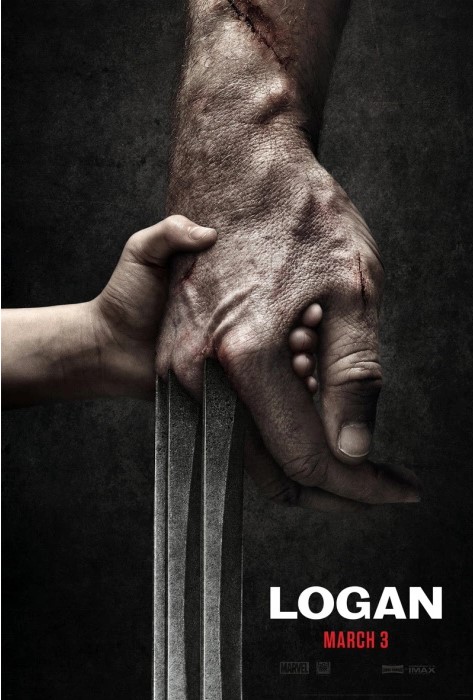 There’s a Deadpool advert that played in my theater just before Logan started, which was short but entertaining. It was just what you expect from a two minute sketch of Ryan Reynolds as Deadpool teasing his next film, but in spite of that, it was enjoyable none the less. Even if the beats are well-known and semi-predictable, there is viewing pleasure to be had in seeing how those beats are played out. Logan is in the same vein as that Deadpool advert, it delivers what you expect and does it well…

For all the comic book movies that have been made, few venture outside of a box made from action movie tropes; tragic past, beautiful women in distress, cackling bad guy, kill him, get the girl etc Even fewer movies have earned such a acclaim as to be great movies. Good comic book films, or fun films even, but not great in the sense of Eastwood, Coppola, Scorsese.

It took a long time between the last two Wolverine films to now to get a movie worthy of the character. X-Men Origins: Wolverine had a nice idea to focus on the man and put Wolverine in a world where mutants exist and interact with him, albeit in a shoddy and unsatisfying narrative pile. The Wolverine tried to put Logan on a quest for mortality and reconciliation with his past, but ended in an off-putting and unnecessary CGI battle. Director and co-writer James Mangold has seemingly cracked the code and delivered to us the Wolverine movie we had almost stopped hoping for.

Set twelve years in the future, Logan has become older and more embittered than we’ve ever seen. He’s almost out of fight, and indeed he doesn’t have much to fight for. Mutants are so few and far between now, they could scarcely be called an endangered species. He makes money as a limo driver so he can care for an aged Charles Xavier just over the Mexico border along with a nervous albino mutant played by Stephen Merchant. Before too long, Logan crosses paths with a young girl on the run and gets one more chance to do something good with his life.

Right from the start, Logan sets on individual tone for itself. There’s no exciting overture, no glowing logos, or narration; it begins with a hung-over “fuck”. Not long after, Logan dispatches a group of men with dispassionate brutality complete with graphic detail. It’s not Tarantino level gore, but the movie doesn’t hide the results of Logan’s claws slicing through opponents. Like a Tarantino movie, the dialogue is engrossing and spot-on for each character. 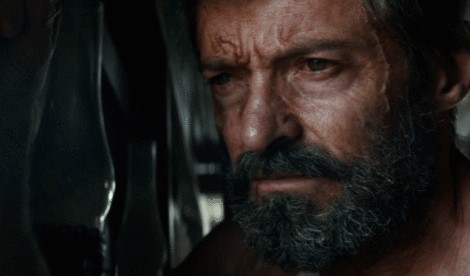 After seeing Wolverine so many times over the course of 17 years, its hard to imagine that Jackman or Mangold could mine any new material. What they’ve done here is take him to his absolute lowest, as a man at the end of his rope and sick of conflict. Comics take superheroes on these emotional rollercoasters all the time, but in film we’ve only seen hints of this in The Wolverine. The rest of the time is Wolverine chomping cigars and fighting the good fight. Yet here, Logan sees what all his fighting has accomplished and finds it lacking. He’s older and not as strong as he once was. Just as Ryan Reynolds gave his pitch perfect performance as Deadpool last year, this is Jackman’s most gripping turn as Wolverine. He may not exactly match his comic counterpart, but he has captured the character’s essence and personified it. 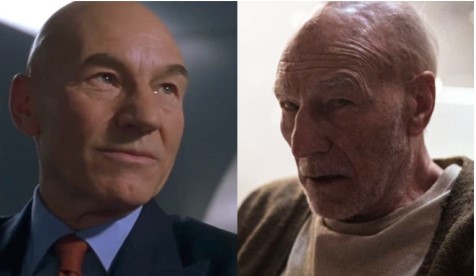 Although he shares the role with James Mcavoy, Patrick Stewart was THE Professor Charles Xavier for a number of years. Having the quiet intellect and poise of a seasoned pacifist, Stewart perfectly embodied the mentor of the X-Men. Over time, Mcavoy’s Charles has become more like Stewart’s which left him little territory. In a smart turn, Stewart is able to blend a bit of the young Mcavoy humor and snark to his performance while still playing up his Xavier’s  wisdom and empathy. His interaction with Jackman’s Logan showcases their shared history and struggles. 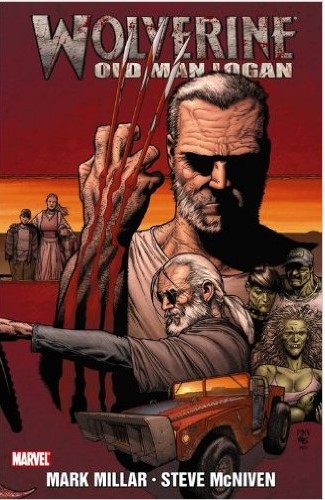 The film obviously takes inspiration from Mark Millar and Steve McNiven’s classic Wolverine: Old Man Logan storyline, despite neither getting thanks in the credits. The writers take wide liberties with the story in addition to X-Men canon, yet the bare-bones plot is the same: Wolverine has to ride across the country for one final mission and the X-Men are no more. The reason for this and the lack of mutants is explained briefly in the film, but it’s a cutting twist from the reason in the comic. It gives Stewart and Jackman added gravitas, partly because of the previous films but also because of its effect on them both in this movie.

The tradition of excellent casting continues in Logan, with Dafne Keen as Laura/X-23. Her performance is considerably more impressive when for much of the film she has no dialogue. She has to convey all of her emotion into body language and facial expressions, and the odd scream. Her parentage is apparent, and she emulates Logan’s veracity and lethal fighting skill well. She acts as a reminder of who Logan was, but also reminds him of what he could be. Much of their relationship builds on what Rogue and Wolverine had in the first two X-films, but with greater focus and results here. Logan is stuck with Laura for much of the movie, and has to guide her away from her quick aggression. Still, her character has an air of danger around her most of the time despite her small stature. By nature of her origins, she has stunted social skills and knows little of how the world works. It’s to Keen’s talent how easily this comes across and how well she holds her own alongside more seasoned actors. 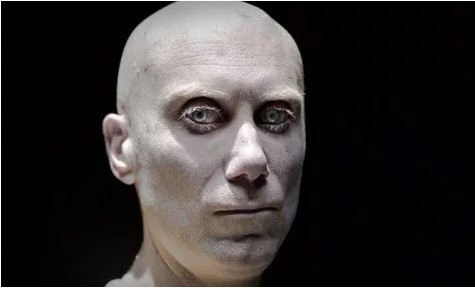 Stephen Merchant has a small but memorable role has an albino mutant helping care for Charles Xavier. He adds some much needed low-key humor to the script, but also gets the chance to show off his dramatic muscles. His role also serves a story device, but demonstrates one of the film’s themes about the burden of choice and leaving with your actions. 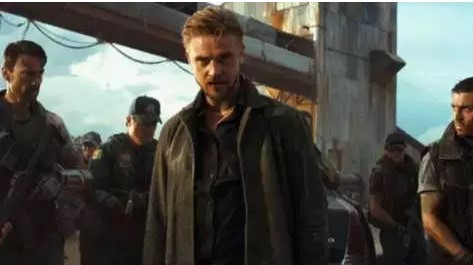 Boyd Holbrook’s Donald Pirece and his troops are almost incidental to the plot, they serve a necessary function to move it along but Holbrook gives Pirece some southern charisma and human menace. Their cybernetic implants give a nice layer to their connection to Laura as well as a hint to their lack of humanity.

Logan breaks away from much of the bombastic nature of most comic book films, it takes the less is more approach. While the villains may not be Heath Ledger caliber,  they’re not needed to be. It’s a straightforward threat they pose, and they’re overwhelming number causes our heroes to flee.

Everything about Logan feels unlike what Marvel Studios, Warner Brothers, and even Fox have done with they’re stable of characters. There’s no one-liners undercutting the tension in scenes, giant beams in the sky, or a ridiculous planet destroying plot. It’s a human drama that deals with the emotional weight on its cast. While the story isn’t revolutionary, it’s a gauntlet challenge to every film going forward.

It doesn’t end on a happy ending, but it stands as definitively the best X-Men yet. It makes up for all the disappointment from the previous Wolverine movies and allows Hugh Jackman to walk away from the role beautifully. Undoubtedly, another actor will wear Wolverine’s claws in the future but it’s impossible to contemplate that matching Jackman’s tenure or happening any time soon. Although the Oscars have already gone by, it seems to me that Hugh Jackman and Dafne Keen at least deserve nominations for their performances here.

Logan stands as one of the finest comic book films of our time and you can take that to bank bub.