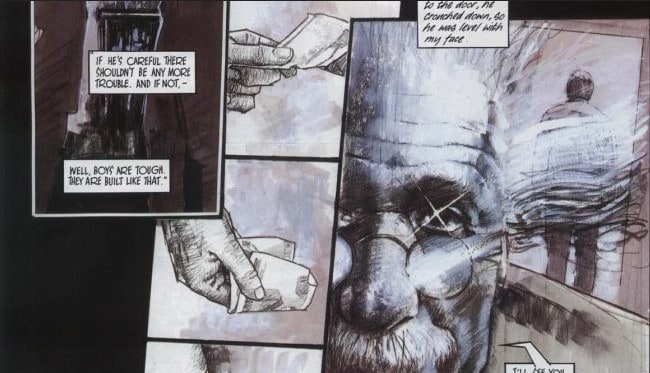 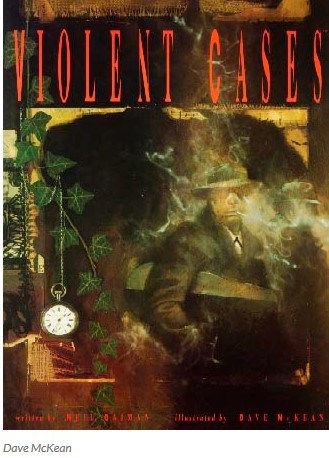 Three decades ago a young writer and artist met in the offices of a telephone sales company. They were both novice talents in search of a way to break into the comic book medium. In this case, they were following up on reports that members of said phone firm were considering funding an “exciting” new anthology spotlighting fresh creators. As is often the case with such ventures, the anthology never panned out, but it did provide the opportunity for the writer and artist to have a chat. They decided they would like to work together, and, after a near miss or two, produced a graphic novel. First published 30 years ago, Violent Cases is the first collaboration between Neil Gaiman and Dave McKean, whose partnership has evolved over the following decades into one of the most distinctive in the medium’s history. Few others creators have been as closely associated with the other as they have. That history began with a tale of childhood, gangsters and that ever elusive thing called memory.

In his introduction to the American edition, Gaiman recalls how the mid-80s were an electric moment in comics’ history. Alan Moore and Dave Gibbons had embarked on Watchmen, while Frank Miller, fresh from The Dark Knight Returns, was diving headlong into Elektra: Assassin with Bill Sienkiewicz. More significantly, however, was the increasing profile of non-superhero orientated stories such as Maus and Love & Rockets. Gaiman reflects on how he and McKean were “both intoxicated . . . by the then-strange idea that comics weren’t exclusively for kids anymore (if they had ever been)”. Violent Cases mirrors this trend, offering readers a discursive story matched with abstracted art. The story consists more of fragments than a smoothly flowing linear narrative, which, in the end, is only fitting for examining memory.

Violent Cases opens in a seemingly straightforward statement: “I wouldn’t want to gloss over the true facts. Without true facts, where are we?” These words are spoken by the narrator, who has a strong resemblance to Neil Gaiman, though nothing in the text confirms this to be the case. Regardless, the narrator wishes to tell a story and in order to provide context, he needs to cast his father in an unsympathetic light. One day when he was four, the narrator’s father injured the narrator’s arm. In the first sign of memory’s unreliability, the narrator admits to no longer recalling precisely how such an injury occurred. One night he was resisting being put to bed, his father applied too much force and the child’s arm was dislocated. The narrator does stress, however, he does not wish to be viewed as a “battered child.” Still he possessed an uneasy relationship with his father who towered over him like a giant. In fact, whenever fables would announce the presence of a giant, the child would imagine his father “feefifofumming” through the enchanted scenery. Later scenes would reinforce this impression of the father as a man possessing a short fused temper. Yet, despite, all this, he remained the narrator’s “rock and my refuge.”

This segment is evocatively illustrated by Dave McKean who demonstrates from the beginning he is more interested in conveying impressions that narrative incident. The first page is composed of a series of small panels. The initial row belongs to the adult narrator and is mostly taken up with white space or the silent act of lighting a cigarette. In such a way, McKean suggests stillness that often proceeds a story, along with a bit of hesitation from the storyteller. This use of empty space repeats at the bottom of the page. The panels are overtaken with black from the father’s sleeve. At first glance the reader thinks of the child on the stairs from his injuries. Closer examination suggests that the father has lapsed into a state of shock at the consequences of his actions. From this tightly confined grid, McKean opens up the layouts with a double-page spread. The left hand register depicts the towering figure of the father from a child’s perspective, while the middle depicts the boy stretched out on the floor, head titled upwards. It is over these pages of father/son interaction which the narrator muses on the gigantic, reassuring personage who was his father.

This theme of violence and the making of excuses for those who commit it is at the core of Violent Cases’ narrative. The incident on the stairs is a piece of exposition to explain how the young boy entered into the care of an osteopath who claimed to have been a physician to Al Capone. The osteopath observes how people always want to hear the Capone tales of glamour, filled with sexy dames and the stylish parties. Or they want to hear about the tax bill. They want the legend of a suave operator, defying authority so that others might revel. The doctor easily slips into a wistful tone when describing those fabled Chicagoan nights:

It would have torn your heart out to see the parties they had, they were so beautiful. The men in their suits and hats, the women with their hair and dresses . . . After dusk it seemed the whole world was knock three times and tell ‘em Sammy sent you. The music went on all night. It was beautiful.

This was bootlegging as the harmless trade of a Jay Gatsby, easily sharing his newfound wealth with all who wished to glitter alongside him. Naturally it was not the full story.

Al Capone was a gangster and there was a reason the narrator’s older relatives are leery to discuss Capone’s trade around an impression child. It is one thing for Hollywood’s public enemies to grind grapefruits into the faces of their molls, yet what actually occurred in those darkened rooms was another matter entirely. This tension of how the past is often recalled through a cinematic glaze is one of the book’s subtexts. McKean repeatedly (and especially in one late scene) litters the background with movie posters for classic films. The narrator confesses that his mental image of the doctor keeps shifting in his mind, at one point taking on the visage of Sam Spade’s murdered partner in The Maltese Falcon. Of course, memory being what it is, the narrator needs to fact check that Spade’s partner does actually appear in the film prior to his untimely demise.

Later in the book, the osteopath does drop the curtain on Capone’s less appealing behavior. An enraged Capone has several prominent men brought to him at gunpoint and tied to chairs. Capone then proceeds to beat each of them brutally with a blunt instrument. If Capone had any motivation or justification for these violent acts, they are left unsaid. Instead they are presented as pure savagery. Gone is any semblance of the gentleman bootlegger, replaced instead with the vicious thug who takes pleasure in humiliation and violence. This tale is inter-cut with a game of musical chairs at a child’s birthday party. As the number of contestants whittles down, the mood grows tenser. When the birthday girl herself is eliminated, she “stomps away . . . her lower lip trembling.” The doctor adds a postscript to his chronicle of violence, explaining how Capone ordered a massive amount of flowers for his victims’ funerals. More than Queen Victoria had received at hers. In the osteopath’s eyes it was a sign of contriteness and “what a swell guy [Capone] could be.” Employers of casual brutality often believe their acts are easily absolved through superficial signs of affection, essentially no different than how excessively nice the narrator’s parents are after the father nearly abandons the son by the side of the road. McKean links all this together beautifully with a page full of flowers. Poking out from beneath the cascading blossoms are the final two musical chair contestants savagely pummeling each other for the honor of victory. The veneer of civilization might be lovely, yet it is also quite thin.

McKean has one of the most unique styles in comics and it is clearly recognizable in this early effort. His interest in collage and loose lined drawing reoccur throughout the book, which in this instance highlight the vagaries of memory. His expressionist, at times almost abstract, art is a natural fit for Gaiman’s ruminating text. In addition, McKean does an excellent job of portraying a child’s perspective. An adult party is memorably evoked by a figure’s back occupying nearly the entire page. Over his shoulder two faces are glimpsed, their expressions inscrutable. The air is full of the grey haze of cigarette smoke. It is an image rich in resonance for the adult reader, while still conveying the befuddlement of a four year old. Adults are sometimes viewed through narrow slits, their bodies seen in fragment rather than whole. Elsewhere, everyday individuals such as a tailor or a party magician take on an otherworldly, somewhat sinister glow.

What the child does not understand, they explain the best they can through imagination. Sometimes these flights of fancy create deeper impressions than more mundane realities. And so, the face of the osteopath remains variable in the narrator’s memory. “Without facts, where are we?” The staying power of Violent Cases partially rests in how it both asks and refuses to answer that question. The narrative culminates with a shadowy incident the child could have witnessed or just as plausibly could have been an imaginative blending of experience and fantasy.

Soon after Violent Cases, Gaiman and McKean took a leap over The Pond to DC where they produced their Black Orchid limited series for editor Karen Berger who would play a key role in introducing their talent to a larger audience. Thirty years later, their work is still closely tied with each other’s (on Wednesday McKean will be providing a variant cover for Dark Horse’s adaptation of Gaiman’s American Gods novel). Violent Cases is a striking debut for their rich, distinctive partnership.