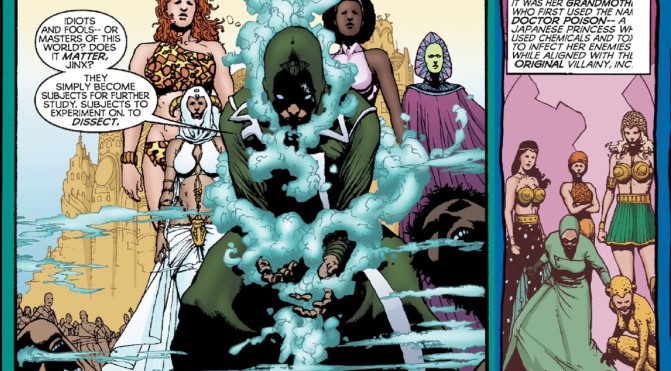 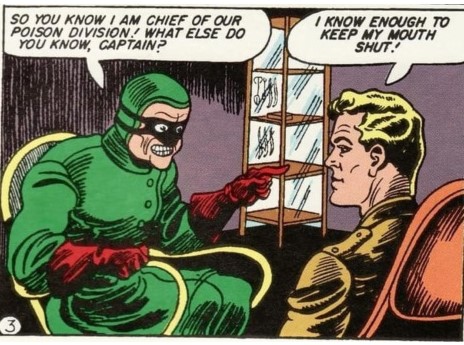 On Friday, Woman Woman’s first solo live action film will premiere in US theaters. Fittingly her primary antagonist will be Ares, a character possessing a long, storied history with the Amazonian princess. He is the Joker or Lex Luthor of Diana’s Rogue’s Gallery, the mirror image which defines who she is. Played by the talented British actor David Thewlis, there are high hopes for Ares to be a commanding presence on screen. In addition, Warner Brothers has confirmed what many fans have long suspected: Diana will face off against a second adversary, namely Doctor Poison. While Doctor Poison debuted several months prior to Ares, the character has never had the prominence of the God of War. Still Doctor Poison’s roots are tied to the earliest of Wonder Woman’s exploits.

Doctor Poison may also be connected to the early years of Wonder Woman co-creator William Moulton Marston. According to Marston biographer Jill Lepore, the young Marston was intellectually fascinated with suicide in a way that only the pampered scions of the leisure class could be. In his self-help book Try Living, he recalled his attitude towards success as something that should come with minimal effort. If achievement could not be gained in such a manner, then “the only sensible thing to do was sign off.” Through his boyhood and adolescence this philosophy served him quite well. In 1911 he moved to Cambridge to begin his freshman year at Harvard. As is often the case with the Golden Child, college life quickly soured his optimism. Marston’s introduction to Ivy League academe was almost entirely bitter. He detested their teaching of English and history, not the least because he was receiving poor marks. The only bright light was philosophy professor George Herbert Palmer. Palmer taught moral philosophy, emphasizing “the ability to put myself in another’s place.” Palmer was also deeply connected to the current suffragette movement, highlighting women’s intellectual/political equality in his lectures. Such aspirational sentiments, along with better grades, inspired Marston is set aside thoughts of suicide. According to Lepore he had come quite close to the act, actually procuring a vial of hydrocyanic acid from a Harvard chemist. Lepore implies that three decades later Marston would recall this rejected toxin when casting about for villains for his new Amazon heroine.

If this theory is true, it is a shame that more of this personal drama did not make it onto the page. (Marston was a wildly complicated and contradictory character, which is one of the reasons his Wonder Woman tales retain their aura of strangeness so many years later). Doctor Poison debuted in Sensation Comics #2 (1942), the third Wonder Woman adventure. As is typical of Marston’s work, the story revolves around the plots of foreign agents to sabotage the American war effort. Doctor Poison kidnaps Steve Trevor to whom he reveals his fiendish reverso gas which causes its victims to do the opposite of whatever they are told. Naturally, this causes a bit of confusion on the army base where Poison tests it. In this depiction, Poison is little more than a standard issue dastardly scientist. His dialogue is run-of-the-mill (“My genius shall destroy America!”) while his outfit resembles a lumpy green hazmat suit. (It would take Wonder Woman co-creator Harry G Peter a few installments to smooth out his art). There is a twist in the fact that Doctor Poison is actually a woman disguised as a man for, um, reasons. The overall story is enjoyable, as it also features the debut of Etta Candy and her Holiday College girls, but the adversary leaves a little something to be desired. If Doctor Poison was an attempt by Marston to purge his former demons, it is not reflected here. The more revealing bit of his subconscious would be the panel of Etta punishing Poison with several swats on the rear.

Doctor Poison, or as she is more properly known now Princess Maru, would return two years later for Sensation Comics #24. Maru, who was Caucasian in #2, is now depicted as Asian working with Japanese agents instead of German ones. She is posing as a nightclub act while developing a gas that can jam the mechanics of airplanes. (Despite her name, Maru does not experiment much with actual lethal toxins). Steve Trevor once again crosses paths with her and once again, being the well-meaning but easily duped sap he is, gets kidnapped. Maru makes a stronger impression here than she did in her first outing, though, she remains mostly a type. Still, Marston did tend to invest his female antagonists with more personality than his male ones and that trend continues here. What is most curious is how Marston never bothers to give any background on Maru. In the end she remains a blank slate of motivations.

As was often the case with female villains, Diana has Maru shipped off to the Amazon’s Reform Island for rehabilitation. (Simply locking up criminals is not the Amazonian way). Usually the subjects take to their instruction, learning to be more selfless individuals. The best case study for this process is the Baroness Paula Von Gunther, whose journey from nemesis to ally makes her one of the most intriguing figures in Marston’s stories. Maru, though, did not take to all this aspirational do-goodness. In Sensation Comics #28 she bands together with a few other inmates to form Villainy Inc. They strive to take over Paradise Island, but, naturally fail. If Marston possessed any special connection to Maru, it is telling that he brought her back for #28 as that would be his final Wonder Woman story before the ghost writers started. It is also the last appearance Maru would make for a few decades. She would be ignored not only for the rest of The Golden Age, but the entirety of the Silver and Bronze ones as well. She would only resurface in 1999 for Wonder Woman #151.

Her post-Crisis on Infinite Earths version debuts in a two-part story by Eric Luke and Matthew Clark. She is now Marina Maru, granddaughter of the original Doctor Poison whose World War II exploits stayed canon. As was the style of the day, Clark gives her an edgy look, as her costume is not only skin tight, but actually grafted to her skin. Her facial expression is frozen in maniacal mode, emphasizing wide eyes and toothy grin. Her personality also plays up her mental unbalance over her intellect. In such a way, Luke and Clark replace many of the clichés of Marston’s age with the ones of their own. Poison’s plot seems to be a riff on a larger storyline from Luke involving the nature of mythic narratives. Poison believes that contemporary civilization has denied the mythic which has twisted it into internal monsters which she wishes to release. So basically, she serves as an excuse to have Wonder Woman and her new friend Rama beat down a huge spider creature. It is has its moments, but Poison’s overly familiar antagonist is not among them.

The highest profile storyline for Doctor Poison would come two years later when Villainy Inc. would reform to invade the realm of Skartaris (Land of the Lost, Wonder Woman #179-83). Written by Phil Jimenez and mostly illustrated by Roy Allan Martinez, Land of the Lost is a rockling romp through DC’s version of the Savage Land, a landscape crawling with dinosaurs, strange races and a hi-tech underground computer running the whole show. It is a fun adventure yarn which still manages to hit the right notes about Diana’s aspirational subtext, a feat not as easy as it sounds. Martinez could have dialed back a little on the pin-up poses for Diana, though, he does stop short of full-on leering. Jimenez dispenses with Marston’s original Villainy ringleader Eviless selecting instead another Marston creation: Clea, former Atlantis queen with multiple grudges. She has assembled a team which is an interesting mix of old (classic Wonder Woman foes Poison and Giganta) recent (Titans villains Jinx and Trinity) and brand new (Cyborgirl, essentially a criminal version of Cyborg). Given their eclectic backgrounds, this motley assembly plays off each other nicely. However, once again, Poison’s character gets lost a bit in the shuffle. Jimenez never really develops her personality beyond Luke’s sketch. Thus she works well within the group dynamic but unlike, for example, Cyborgirl, the reader does not finish the tale wishing for more Poison. 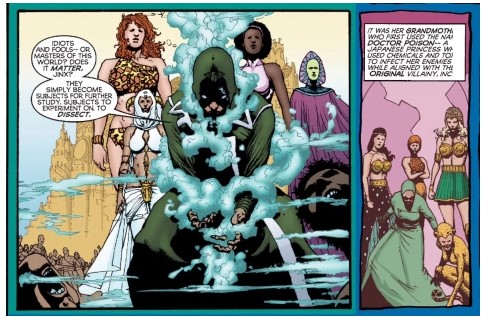 After her turn with Villainy Inc., Doctor Poison disappeared again for several years; pretty much her only noteworthy appearance was in Ben Caldwell’s Wonder Woman story for Wednesday Comics. Meredith Finch rebooted Maru into a Caucasian for the New 52, while Greg Rucka switched her over to Japanese for Rebirth. Neither writer did anything to leave their mark on the character.

Thus, 75 years after her debut, Doctor Poison remains a rather nebulous figure. This could work in her favor for her cinematic debut. Unlike Ares, who many fans will approach with firmly held opinions about his portrayal, Maru remains a blank slate. Everything from her background to her personality is open to revision. She will be played by the Spanish actress Elena Anaya which suggests another ethnicity revision is in store. In addition, Poison is one of the characters who could best benefit from Warner Brothers’ decision to shift the setting from World War II to World War I. Among its many brutalities, World War I is infamous for its use of weaponized poison gas, a natural fit for Maru’s skill set. Now, as is often the case with secondary villains, Poison’s role could be more extended cameo than anything else. Still, there remains a fair amount of potential to her character. Perhaps the big screen will be where she finally makes a lasting impression.