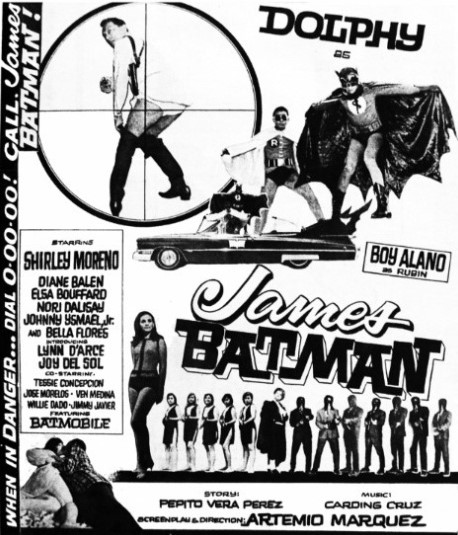 The Unauthorized Batman Films of the 1960s

Over the years, filmmakers have depicted Batman in a variety of films unauthorized by the character’s publisher, DC Comics.  These unauthorized films offer different artistic interpretations of the character, ranging from fan homage to comedic spoof to commercial ripoff to pornography.  In the 1960s, both before and after the success of the camp Batman television series which debuted in 1966, several unauthorized Batman films were made in the United States, the Philippines, and Mexico that depict Batman and Batman-related characters in a comedic manner that fit well with the tone of the Batman television series.

Artist Andy Warhol made the first Batman film depicting the character in a camp fashion.  Entitled Batman Dracula, the 1964 film is believed lost, although portions of the film are shown in the documentary Jack Smith and the Destruction of Atlantis.  Warhol did not have the rights to film a Batman movie, and only showed the film at private screenings.  The plot of the film is unclear; it presumably involves Batman and Dracula, as actors Gregory Battcock and Jack Smith played the roles of Batman and “Batman/Dracula”, respectively (based on the listed credits, it’s unclear whether Smith played both Batman and Dracula roles in the movie, and if so how that related to Battcock’s portrayal of Batman in the film; Smith clearly played the role of Dracula.)

At YouTube, Andre Pekowski has put some of the Batman Dracula footage to music:

Released in 1965, Alyas Batman at Robin (which translates to English as “Alias Batman and Robin”) is a low-budget 1965 Philippine comedy featuring Batman and Robin.  In researching this article, no film footage was found, and the film’s plot, other than being a comedy, is unclear.  In the movie, actor Bob Soler and Lou Salvador, Jr. play Batman and Robin, respectively.

The year 1966 saw two films released that were inspired by the commercial success of the Batman television series released that year.  American director Jerry Warren’s The Wild World of Batwoman stars Katherine Victor in the titular role; Batwoman uses beautiful female agents called “Batgirls” to help prevent her archenemy, Rat Fink, from stealing an “atomic hearing aid” (yes, you read that correctly – an “atomic hearing aid”).   Warren was sued for copyright infringement, and although he won the lawsuit, he later re-released the movie with the new title of She Was a Hippie Vampire.

The trailer for The Wild World of Batwoman is below:

The Philippine movie James Batman is a spoof of both the James Bond movie franchise and the Batman television series.  The authorities call in both James Bond and Batman to stop the criminal organization CLAW from destroying the world, but the two heroes try to one-up one another with their antics; while this provides great comedy for the movie, the two heroes don’t achieve any crime-fighting success until they agree to work together.  The Philippine actor and comedian Rodolfo Vera Quizon, Sr. (under the screen name “Dolphy”) plays both Batman and James Bond, and actor Boy Alano plays the role of Robin (that is, “Ruben”, the character’s name in the movie).

Below is some footage from the beginning of the movie: 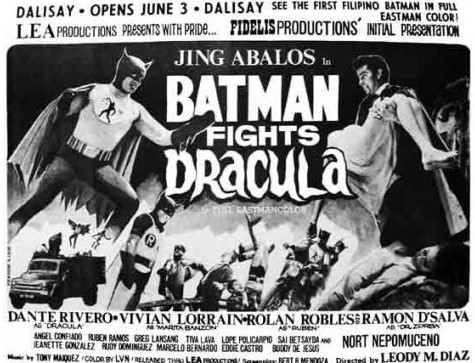 The 1967 Philippine movie Batman Fights Dracula is lost.  Other than Batman fighting Dracula, the plot and tone of the movie is unclear, although the Internet Movie Database lists the movie as a comedy and the movie was apparently filmed in color.  Actors Jing Abalos and Rolan Robles play Batman and Robin (that is, “Ruben”, the character’s name in the movie), respectively, and actor Dante Rivero plays Dracula.

The 1968 Mexican film La Mujer Murcielago (which translates to English as “The Bat Woman”) stars actress Maura Monti in the titular role.  The Batwoman is – as a police officer describes her early in the film – “a wonderful and very rich lady who lives in the capital city” who “uses her vast fortune to fight against the forces of evil” and “behind the mask, she’s become a great wrestler.”  The Batwoman is called in to investigate the mysterious deaths of wrestlers in Acapulco, in a very tongue-in-cheek fashion.

The unauthorized Batman films of the 1960s mirror the camp aesthetics of the 1966 Batman television series, and are a good indication of the fascination and interpretations that filmmakers had for the Batman character in the 1960s (or, at least in some cases, the films are a good indication of how eager filmmakers were to profit from the popularity of the Batman television series).