The two-page Channel 52 comic strip has been missing from DC Comics’ publications for several weeks.  Launched in February 2013, the strip depicts a news team composed of minor DC characters – Bethany Snow (a reporter once allied to Teen Titans villain Brother Blood), Batman villain Calendar Man, the satiric Ambush Bug, and hirsute extraterrestrial superhero Vartox; the team reports on DC’s events and characters.  Channel 52 is a promotional feature designed to interest readers in purchasing more comics; the strip’s title reflects DC’s goal to publish 52 comic book titles a month, and a new strip is usually printed in the back pages of DC’s comic books each week.

It’s unclear whether the strip is on hiatus or permanently cancelled.  (For the past few weeks, a two-page, illustrated “DC Comics Presents… Channel 52” text piece has replaced the strip; this feature presents commentary from editors and creators on DC’s characters and upcoming events.)  However, it is clear that Channel 52 – which uses comics characters in a news broadcast setting to promote DC’s comics – combines the ideas of two past promotional strategies used by DC Comics.

In 1962, DC Comics created mascot Johnny DC, a young boy in the shape of the DC Comics logo, with a graduation cap atop his head.  Throughout the 1960s, DC Comics used the character to promote its publications.

By the 1970s,  Johnny DC was discontinued as a mascot, although in the late 1980s DC would use the character in its promotional page “DCI with Johnny DC”, which had information about creators, upcoming projects, and a checklist of DC Comics titles.  In 2004, the character’s name and updated image were used for an imprint of DC comic books marketed to children, such as Looney Tunes and Scooby Doo.

Humorously, in 1996 the former DC mascot was revealed to be the villain of the satiric comic book Sergio Aragonés Destroys DC:

From 1976 to 1981, DC Comics used the promotional page “Daily Planet” to advertise its comics;  formatted like a news page from the Daily Planet (the newspaper that employs Clark Kent/Superman), the promotional feature reported on the adventures of DC’s superheroes.  The “Daily Planet” page also answered questions submitted by readers, challenged readers with trivia quizzes, and had a cartoon (illustrated by Fred Hembeck) that satirized DC’s characters. 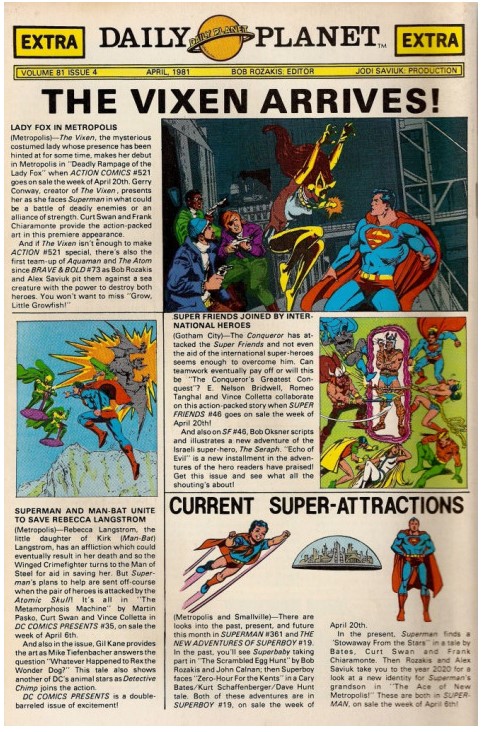 Channel 52 combines DC’s past promotional strategies of using characters (Johnny DC) and fictional news reports (“Daily Planet”) to focus readers’ attention on DC’s comics and characters.  Although the strip’s future is uncertain (and its entertainment quality and advertising effectiveness can certainly be debated by fans), Channel 52 is an interesting synthesis of DC’s past promotional efforts.