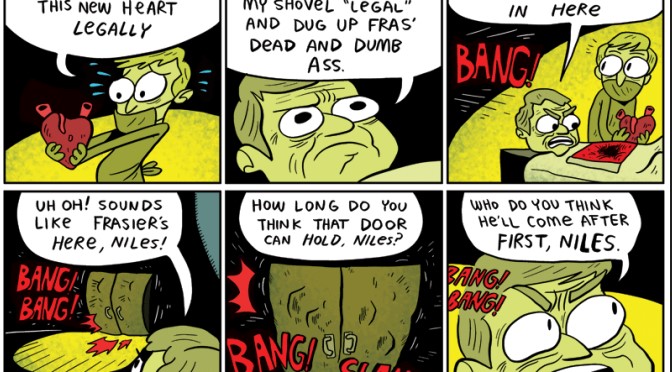 An Interview with KC Green

Last month, Nothing But Comics! was honored to commission a cartoon by artist KC Green.  An Oklahoma native who now lives in Massachusetts, Green has created a variety of delightful comics that include the eclectic webcomic Gunshow, an adaptation of the classic novel The Adventures of Pinocchio, and (with artist Anthony Clark) the Western fantasy webcomic Back, among others.

Nothing But Comics! emailed Green to ask him a few questions about his work, his hobbies, and any advice that he could share with new creators.

NBC!:  You are a prolific creator. You’ve created funny webcomics like Gunshow and Advice from Mr. Longlegs, a comics adaptation of the novel The Adventures of Pinocchio, and you have also written the Regular Show comic book for BOOM! Studios, among other comics. You seem to stay busy, so I have to ask – what are you working on today?

Green:  Today is some busy work before Winter Storm Juno hits us here in western Mass.  Just making sure things are taken care of before I decide to call it a day and not work tomorrow, probably.  I wrote another script for Back and am gonna at least finish inking this new Video Game Cheats n’ Beatums (video game comic I do for usgamer.net). I also played Peasant Quest on homestarrunner.com to get me pumped up for trying to play King’s Quest since I ain’t never played it before. And watched some more Friends. That’s about it. Slow day sorta. I already have a bunch of Pinocchio pages made for this week and next.

NBC!:  What are the challenges of creating a webcomic? What advice would you give someone who has never created a webcomic before, but is thinking about doing so?

Green:  Challenge is starting. You can think and think and write and write but you never actually start it up. You just gotta do it and show people what you can do and that you can keep doing it and finish what you started. Another challenge is sticking with it. Nothing is as fun as thinking up ideas and stories, but actually doing them can be work and boring from the inside looking out. Sticking with it is key!!! If you wanna tell that story, you gotta stay in it for a while.

NBC!:  On your journey as a creator, what mentors have encouraged or inspired your work?

Green:  There have been many over the course of my struggles who have encouraged and inspired, but I don’t feel I ever had one mentor. I just did the work and learned different things from my peers along the way. Then I take what I like and keep using it.

NBC!:  What is the best creative advice that you have ever received?

Green:  Don’t feel too precious about your art. You will be stuck in your ugly head for too long not making anything and worrying too much. Nothing is perfect, just do your best.

NBC!:  Your comics evolve over time. Gunshow started as three panel black-and-white webcomic that evolved into a colored, 18 panel strip towards the end, while your Pinocchio adaptation remains steady at 8 black-and-white panels. As a creator, how do you decide when it is time to shake things up on a strip, or whether you should keep your strip consistent?  When you do make significant changes in a strip, do you encounter a lot of resistance from fans, or encouragement?

Green:  You just sort of feel it in your gut about when you need to change it up. There are a lot of later Gunshows that are just 6 panels, cus I like that format for telling a quick joke. Pinocchio, a lot is going on and eight pages help keep it going. Not every page is eight panels. There’s no calculations for this stuff, you just feel it and go with what feels right and good.

NBC!:  What inspired you to adapt Carlo Collodi’s The Adventures of Pinocchio as a webcomic?

Green:  I had stumbled onto the Wikipedia page for Pinocchio for some reason I can’t recall. It could have had something to do with how much the Disney fairy tales we all know differ so much from the originals. Like I had just learned about the part in the original Cinderella where the stepsisters had to cut off their toes so the shoe would fit, and the prince poured blood out of the shoe and discovered their lies. So I wound up at Pinocchio and read the basic outline of the plot the wiki had written up. It was surreal how much just STUFF Pinocchio goes through in the original story. It goes everywhere! It’s so dark and weird that only someone in the 1800s could cook up without really thinking much of it. It was always in the back of my head that it seemed like it would be fun to adapt because I don’t think I’ve seen anything that does the original any justice.

NBC!:  Unlike some of your other webcomics, the Pinocchio comic is an adaptation of a novel that features a classic, beloved character. What are the challenges of adapting this classic novel into a comic?

Green:  I want it to be sincere and funny without relying on odd fourth wall breaking jokes or references to other adaptations or other kind of detachment from the original story. The story itself is already so odd and charming and dark that I just want to share that. The most I do is leave out the narration, which is a big chunk of the text and explains little things here and there. Presenting it without the narration has moments of I have to have some person explain something that the author explained already in his text that I leave out, but beyond that I just let the story tell itself.

Green:  Currently Adventure Time and Steven Universe are two cartoons I follow and they are both killing it with story and characters and everything. I love them both a lot. Cartoons did influence me to draw when I was younger, but now I already get enough crap in my head, it’s my turn to get it out of me. But I try to keep up with Adventure Time and Steven Universe. I would be lying if I said I wasn’t completely down to do an animated thing of some kind, but my knowledge of the industry and how it works seems like I would have to give myself wholly to the project, which I am not ready to do right now. When will I be? I don’t know, but I got comics to make first.

NBC!:  When you are not reading or creating comics, what hobbies do you pursue?

Green:  Mostly video games. That’s not exciting, but I don’t do much beyond sit at my computer tweeting, drawing something, watching sitcoms on Netflix, or playing a game (or a combo of 2 of those things). And I even made video games a part of my comics job! So now it’s not even a hobby anymore! I have no hobbies!!  I once put together a Lego set and liked that.

NBC!:  Your work has a lot of humor in it. Are there any favorite gag cartoonists, authors, or comedians that influence your humor?

Green:  These questions are honestly hard to answer for me, because so many things fall into my head and it’s always different. Five years ago I would have said Chris Ware was a big influence (on my art, mostly) and he was, but not so much now. My head wanders so much I have no good answer for this. You ask me this and I go, “Oh my god what should I say I don’t know oh my GOD.” I am sorry for this cop out but its true, I’m a big flake. I mean, all I take in these days is Friends on Netflix, but that’s not a good influence on my work or writing!