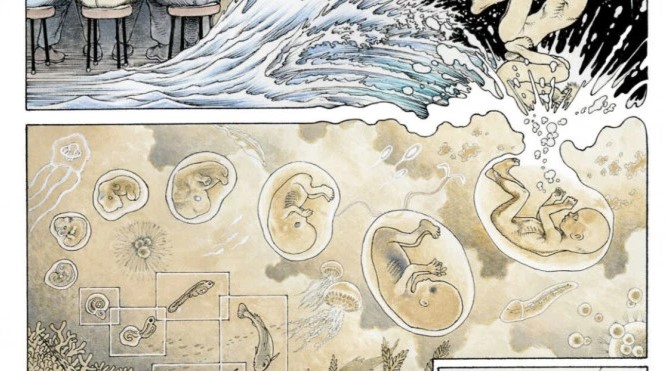 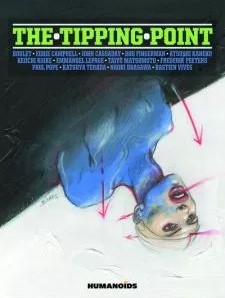 With an all star group of artists from around the world, Humanoids The Tipping Point anthology is a series of short comics about change and how we are lead to it. It features work from some of the mediums best and most well accomplished visual story tellers and it offer’s an engaging suite of stories for comics readers.

The talent amassed for the Tipping Point is vast and varied, featuring work from John Cassady, Paul Pope, Bob Fingerman, Eddie Campbell and several popular Japanese & European illustrators. In that way, each story feels radically different from the next. Though thematically similar, the shared concept is something that is elastic enough to offer a wide range of stories and approaches. As a result, your mileage may vary depending on how your taste’s range. For readers less familiar with contemporary Japanese cartoonist like myself, some of the contents of The Tipping Point will feel like a revelation. Artist Keiiche Koike’s Fish is a lush and sprawling short form epic about the ethics of eating meat and it’s effects on the enviroment that starts out relatively mundane before morphing into something extraordinary. Other Japanese artists like Atsushi Kaneko’s fluid Akiraesque gangster doomsday parable Screwed or  Katsu Terada bright and vibrant surreal futurist samurai short Tengu are among the best work in the collection. Less well known to American readers, European artists Emanuel LaPage comic on discovering sexuality called Awakening & Bastien Vives chilling black and white sci-fi horror story The Child, also make a strong impression. And of course, more familiar names also make their mark on this anthology with Paul Pope’s excellent Consort The Destroyer, with all of the legendary artists talent on full display or the surprising Huckleberry Friend by John Cassady, which explores the moral dilemma of Mark Twain’s Huck Finn in deciding whether to help a friend whose been enslaved in the confederate South.

The Tipping Point wisely collects a series of comics that are concise and make their point within a small economy of space. The book itself is a swift 132 pages that could easily be completed in an evenings readings but the comics within invite repeat viewings for their complexity and sheer craft. In that way, it’s about as successful a comics anthology as one could ask for with some serious talent. The Tipping Point has some lofty ambitions with the talent assembled and for the most part, it reaches that.