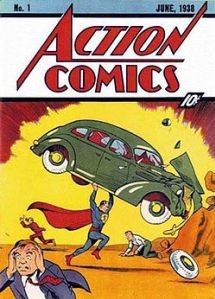 Beside Superman: The Other Protagonists of Action Comics #1

Seventy-six years ago this week, on April 18, 1938, the release of Action Comics #1 changed comics forever.   The anthology comic book featured Superman, introducing both a bold new character and the superhero genre to comics. Created by Jerry Siegel and Joe Shuster, Superman quickly took over Action Comics and spawned many imitators, giving the comic book medium a bright new genre that would capture the attention of both kids and adults.

But Action Comics was an anthology, and there were eight other protagonists featured in the first issue.   There is little attention given to those other characters, most of which have been completely forgotten by today’s comics fans. Given the anniversary of the release of Action Comics #1, it’s an excellent time to examine the other characters that were featured with Superman in the first issue.

Before looking at the individual strips, it’s interesting to note that the layout for the Superman strip differs significantly from the other strips in the first issue. The rest of the strips are a rigid eight panels per page, and most of the panels are the same size. The Superman strip has an irregular number of panels (as few as five) per page, of varying size, allowing for larger panels and a more visually dynamic story. Not only was Superman different from his fellow characters in terms of costume and genre, his strip was also visually distinctive.

In order of appearance following the Superman strip in Action Comics #1, below is a list of the comic’s other protagonists, which includes the names of the creators credited in the comic and a brief summary of the strip:

“Chuck” Dawson’s father is killed in a Texas range war, and the boy goes to live with his uncle in Wyoming. The adult Chuck returns to Texas to seek vengeance on the cattlemen that killed his father. Chuck raises hell and gets arrested, and the strips ends with a cliffhanger – Chuck hears approaching footsteps right as he is about to escape from the town jail.

The strip is rendered in stark black-and-white, but the inks are heavy and the letters are bold. Fleming’s artwork and lettering style convey a lot of anger and energy, which is appropriate for this vengeance strip.

Zatara is a master magician in top hat, tuxedo and cape; his powers include divination, mind control, and teleportation.  He is aided by his assistant, Tong. To cast a spell, Zatara sometimes speaks what he desires in reverse (for example, “Emoc ot em, gnot” to teleport Tong to his side), but he is also able to conjure without this constraint, sometimes making things appear or disappear with a hand gesture.

Using a crystal ball to see the future, Zatara learns that his beautiful archenemy – the master criminal known as “The Tigress” – is going to rob a train, and he and Tong set out to foil the Tigress. Although Zatara is able to use his magic to summon a first aid kit to help a wounded detective and to transport himself from danger, the Tigress catches Zatara off-guard and escapes. Zatara’s friend Detective Brady is found dead, and the deceased detective is accused of helping the Tigress. Zatara and Tong set out to clear Brady’s name. Zatara proves that a corrupt train inspector was helping the Tigress, and not Brady. But the Tigress is still out there, and Zatara is determined to keep looking for her.

The strip’s art is a bit static by modern standards, and it is unclear just what Zatara’s magical abilities and limits are, or what his past relationship to the Tigress might be. It’s an intriguing strip featuring a pulp-style hero similar in mission and appearance to a popular newspaper comic strip character of that period, Lee Falk’s Mandrake the Magician.

Zatara is the only character in the first issue of Action Comics besides Superman to have any superpowers, and the character’s adventures would continue in future strips. The character is best known today as the father of DC Comics character Zatanna, a heroic sorceress who focuses her magic spells by speaking what she desires backwards, just like her father once did.

In 1986, the character died in the pages of Swamp Thing, saving his daughter from an occult threat. Although dead, the character has since had cameos in other comics, like Neil Gaiman’s The Books of Magic and the recent Constantine.

Bret Coleman is not a comics character; he appears in a text story entitled “South Sea Strategy”. In the 1930s, the United States Postal Service required comic books to include two pages of text story to be considered a magazine and qualify for the cheaper magazine postage rate.  Coleman is the captain of a schooner transporting supplies from an unidentified South Seas island to Singapore. Coleman is assisted by his “negro” first mate/cabin boy, Cottonball.

The prose is purple: For an instant, the sky to the west was splashed with all the vivid colors of nature’s paint box. Brilliant ribbons of red and blue shot into the void, blending and melting with the softer green and golden shades of the clouds that drifted by. A kaleidoscope of many tones reflected itself in the mirror surface of the sea.

The character of Cottonball is unfortunately a racist stereotype, as evidenced by his name and this prose excerpt: “Yas suh, Cap’n, we sho’ did!” grinned Cottonball, his teeth flashing whitely in the gloom. “De boat am filled right to de brim wif copra an fo’ good measure we has five hundred pounds of pearl shell. Dis am one of de best trips we has ever made, Cap’n!”

“South Sea Strategy” is not a compelling story, and its racism is deplorable. However, the strip provides insight into the level of racism and story quality that was permitted by the comics publishers of that period.

This is a comedy strip featuring apple thief and master of disguise Sticky-Mitt Stimson. Sticky steals some apples, and apparently this was a major offense in the 1930s, because some serious police resources and energy are put into apprehending him. Sticky loses his apples, but escapes justice.

The strip is funny and well-illustrated.

“The Adventures of Marco Polo” by Sven Elvén

This is a historical adventure strip starring Marco Polo. In the year 1271 A.D., a young Marco Polo sets out on an expedition to reach the “Kahn of Tartary”. Polo encounters many dangers, and the strip ends with a cliffhanger – Marco and his men are attacked by bandits. The strip is not the most exciting feature in the comic, but the protagonist is probably the only character in the comic as well-known as Superman.

“Pep” Morgan is a boxer trained by his friend, Pop Burkett. Pep wins the heavyweight championship by defeating “Sailor” Sorenson, who is managed by the unscrupulous “Doc” Lowry – a doctor so crooked, he’s not allowed to practice medicine. In the match, Sorenson’s gloves were coated in liniment, which temporarily blinded Pep, but Pep prevailed. Six months later, Pep faces another opponent managed by Lowry – a seemingly unbeatable Australian aborigine known only as “Boomerang”. During the match with Boomerang, Pep starts to feel dizzy but manages to knock Boomerang out. Pop discovers that one of Boomerang’s gloves contains a hypodermic needle, which drugged Pep and caused his dizziness. Lowry is exposed and sent to prison.

The strip’s art is good, but the story is bland.

Scoop Scanlon is a reporter for the Bulletin; he and his photographer Rusty James visit the docks to report on the arrival of the international jewel thief known as “Arnold”. Scoop and Rusty become part of the story when Arnold’s gang arrives at the docks with machine guns. Arnold escapes, but Scoop and Rusty help the police chase down the criminal and return him to custody.

This black-and-white feature’s characters were well-illustrated by Ely, but the strip’s action isn’t dynamic or engaging.

Tex is a Texas cowboy that struck it rich in the oil fields. He now travels the world, and while visiting a small town in England he discovers a dead body. A local femme fatale is responsible for the murder and tries to blame Tex for the crime, but Tex, with the help of two children, Robert and Betty, proves his innocence and brings the femme fatale and her gang to justice.

The art and story in this first adventure are not that engaging, but in the 1940s, the Tex Thomson character became a costumed crime-fighter, Mr. America, and later, the costumed Axis-fighting hero, the Americommando.

In the 1990s, Thomson would play an important part in James Robinson and Paul Smith’s The Golden Age comic book miniseries and in the Hero Hotline miniseries as the mysterious “Coordinator” character .

The other protagonists of Action Comics #1 did not endure; they could not compete with the dynamic action, bright costumes, and secret identities of Superman and the other superheroes that the character inspired. But these other protagonists do give an indication of what comic books were offering before Superman and the superheroes dominated the medium – cowboys, slapstick, athletes, historic fiction, crime-beat reporters, sailors, imitation magician crime-fighters, and dilettante adventurers – and demonstrate how important Superman was to defining the new medium of comic books.

The images and characters above are the property of their respective owner(s), and are presented for educational purposes only under the fair use doctrine of the copyright laws of the United States of America.