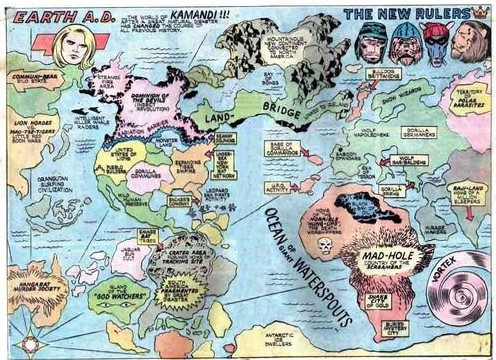 The Cartography of Comics

Maps are wonderful tools that can help us find our way and divide up our surroundings:  into our land and theirs, into safe places and unsafe, and, ultimately, into the known world and the unknown.  Exploring has become tantamount to mapping, turning the empty margins and blank areas of terra incognita into familiar terrain.  In a literary genre as concerned with exploring new worlds as fantasy is, it is hardly surprising that the map is a frequent complement to the texts, a companion on the reader’s journey through the alien landscape. – Stefan Ekman, Here Be Dragons:  Exploring Fantasy Maps and Settings.

As scholar Stefan Ekman notes in his book Here Be Dragons:  Exploring Fantasy Maps and Settings, maps in fantasy novels can be used to both inspire the reader’s imagination and ground the fantasy (that is, make the fantasy setting more realistic and less strange to readers by providing specific details about the imaginary setting).  Although maps are not as common in comic books as they are in fantasy novels, occasionally comics creators provide a map to the fictitious settings of the comics page.

Maps can be used in comics to give structure to the strange, to reassure readers that a fantasy setting like Gotham City (see above)  is more than just a random assortment of gothic architecture. The city has parks, streets, and bridges, and there is method to the madness. Crime Alley exists, north of Robinson Park (note the reference to comics creator Jerry Robinson) at the heart of the city. Bruce Wayne lives north of the city, and Commissioner Gordon lives way south of Arkham Asylum. Notice any other fun details?

Maps can illustrate the wonder of an imaginary comic book nation, like the map above of the Black Panther’s African kingdom of Wakanda by Rich Buckler and Klaus Janson from Marvel Comics’ Jungle Action #6. The map shows a lush jungle nation with borders surrounded by mountains and ocean. Wakanda has regions of ominous nomenclature that excite the mind, like the “Serpent Valley”, “Panther Island”, and “Piranha Cove” (indeed, given that piranha fish are native to South America and not Africa, Wakanda must be a land of wonders).

But maps also constrain the story narrative, risking potential continuity errors. Notice that this early map of Wakanda shows the nation bordering the Atlantic Ocean, putting its location in western Africa, despite later stories that place the nation in central or even eastern Africa. Also, Wakanda’s access to the Atlantic Ocean is inconsistent with the notion that Wakanda is an isolated African kingdom.

A map can provide readers with a nice summary of the world of a comics character like future lawman Judge Dredd, whose adventures have been going strong for almost forty years in a dystopian world of out-of-control mega-cities and harsh wastelands. The map above is informative for both new and veteran Judge Dredd readers.

Maps can transport readers to other planets, like the doomed world of Krypton. Any world that could produce a great hero like Superman must be interesting, and the map above provides an enticing look at a lost planet of boiling seas, fungus caverns, glass forests, and intriguing cities.

Maps can show us fantasy worlds that spark the imagination. Whose imagination is immune to the wonders of the land of Skartaris, from Mike Grell’s Warlord series? Creative readers could look at if for hours, absorbing all the details and planning their adventures on the Dragon Sea or their quest through the Desert of Doom.

Maps can take us to alternate worlds, like the map above from Arvid Nelson’s Rex Mundi comics series, in which magic is real and the course of history is different from our own. With a just a little knowledge of history, even readers unfamiliar with the series can see that this is a modern world where the Ottoman Empire still flourishes, there is no unified German nation to dominate Central Europe, and Spain is still under the political control of Muslims. It’s a rich setting ripe for great stories.

Maps can be used to show us alternate comics universes, and the map above illustrates the alternate world created as a result of DC Comics’ “Flashpoint” event. Readers see the hotspots of this new world, so unlike the continuity-rich universe they are familiar with, as Amazons and Atlanteans clash, and Africa is dominated by Gorilla City. It invites readers to check out a new world, and highlights the points of interest for future stories.

Maps can show us possible future settings of our favorite characters. The map above from Marvel’s “Old Man Logan” storyline in the Wolverine comic shows us a future America where the bad guys have won, and illustrates the dangerous progress of our hero as he travels from Hulkland to New Babylon. (And readers might wonder just how the Kingpin took over the Domain of Magneto.)

Comics maps are fun to look at – take this map above of Kamandi’s future Earth as illustrated by Jack Kirby. It’s a busy map, showing a world in which an imperialistic Tiger Empire encroaches on gorilla communes, a world of altered radioactive geographies, and a civilization of surfing orangutans. The map sparks the imagination and delights the eye, and Jack Kirby is clearly having fun (“Mao-Tse-Tigers Little Red Book Wars”). It’s one of the best comics maps ever!

Comics maps can be informative, entertaining, and fun, and readers should take a closer look at them when given the opportunity.

The images above are the property of their respective owner(s), and are presented for educational purposes only under the fair use doctrine of the copyright laws of the United States of America.