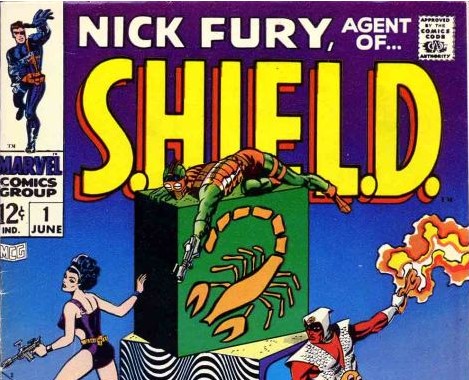 “To a dedicated readership of gearheads, pot smokers, and art students, ‘Nick Fury, Agent of S.H.I.E.L.D.’ was the apex of an art form.” – Sean Howe, Marvel Comics:  The Untold Story

“No comics artist had ever been so concerned with the whole of the package, from story to layout to production to those covers of his that looked more like posters.  With his diverse talents, Steranko could approach comics on his own terms, and he did so with a vengeance.” – Gerard Jones and Will Jacobs, The Comic Book Heroes

This week the NBC! community will choose the best Marvel Comics issue of the past 75 years to recommend for inclusion in the Marvel 75th Anniversary Omnibus.  This omnibus will include the best issues from Marvel Comics’ rich publishing history, and it would be a shame if the first issue of Jim Steranko’s Nick Fury, Agent of S.H.I.E.L.D. was not included in this historic collection.  Steranko (both writer and artist for this issue, a rarity in the comics industry when this issue was published in 1968) was clearly influenced by The Spirit artist Will Eisner, EC Comics horror artist Bernie Krigstein, and Marvel’s Jack Kirby and Steve Ditko as he crafted a fast, suspenseful issue that begins with exotic intrigue and ends with sad, ironic tragedy.

The issue opens with a lone moonlit figure scaling an edifice – the title of the comic “Who is Scorpio?” emblazoned on its side (a neat homage to Eisner, who used this effect many times in his The Spirit comic strip).  This page – and the next two – are “silent”; that is, the pages contain no captions or thought/word balloons (inspired by the “silent” panel sequence used by EC Comics artist Bernie Krigstein in his story “Master Race”).  The second and third pages use eight panels per page to create tension, as the lone figure – Nick Fury – enters the edifice, subdues a guard, and is about to enter a secured room before being shot in the back.  The lighting effects and the pace of the story on those two pages build suspense to that moment of Nick Fury being shot…

…and then we turn the page and discover that appearances are deceiving; something else – something cool – is going on.  But Fury does discover that something is amiss – a threat to his life that might be connected to the strange scorpion emblem that he found on the floor. 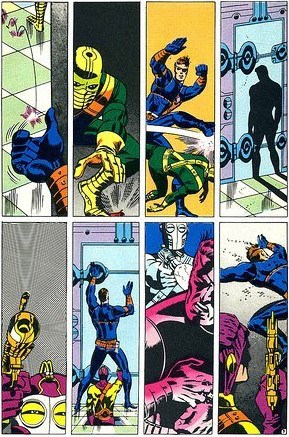 And that’s just the first four pages.  Steranko is just getting started, because this issue isn’t about Nick Fury and S.H.I.E.L.D.  It’s about a comedian named Flip Mason; Flip has a gambling problem and owes Kansas City gangster Mitch Hackett (who looks uncannily like Mason) a lot of money.

It’s amazing that Steranko gets you to care about Flip in only three pages (the character only appears in three of the comic’s twenty pages).  Flip is a sad human being – a father and husband separated from his family and in trouble with the Mob.  But Flip’s story will have to wait, because, meanwhile, in the Nevada desert…

…Nick Fury is lying on his back, calmly smoking a cigar while waiting for S.H.I.E.L.D. scientists to drop an H-bomb on him. (And you think you have a terrible job!)  Fury notices that the prototype force field that is supposed to protect him has been sabotaged, so he runs to catch a rocket sled to get away from the test area before the bomb lands.  He holds on to the rocket sled for dear life… we turn the page… and are treated to a two-page spread of a bare-chested Nick Fury crashing a jet cycle into a S.H.I.E.L.D. base captured by the villainous Scorpio.  Steranko quickly establishes Scorpio as a dangerous foe, but – as the title of this comic also asks – “who is he?”

We don’t find out this issue.  Because while Fury is battling Scorpio, Flip Mason is having his own adventures in nearby Las Vegas, which will soon have an impact on Fury’s confrontation with Scorpio.  The comic ends with a resolution to both Fury and Mason’s adventures.  I won’t spoil it for you, but for me, this comic’s ending was a sad, gut-wrenching moment.  When I read the ending, I realized that all the intense, fast-paced action was just misdirection; this comic book issue is really about an imperfect human being living in a world controlled by forces way outside of his control.  There is no moral lesson in this comic, just sad tragedy.

Steranko does all of this in twenty pages, and despite the whirlwind of action and scene changes, he never loses his readers, deftly explaining what could be jarring scene transitions with just a few thought balloons or a well-placed panel. Steranko’s art style takes the dynamic action and fantastic designs of Jack Kirby and combines it with with the anxious psychedelics of Steve Ditko to produce a unique comics style.  You can see the sweat and fear on his character’s faces as they ride rocket sleds.

Nick Fury, Agent of S.H.I.E.L.D. #1 is a compressed, action-packed story crafted by a comics master that goes beyond the simple morality tales of most Silver Age comic books.  It’s a masterpiece that deserves a place in the Marvel 75th Anniversary Omnibus, and it’s my choice for Marvel’s best comic book issue of the past 75 years.