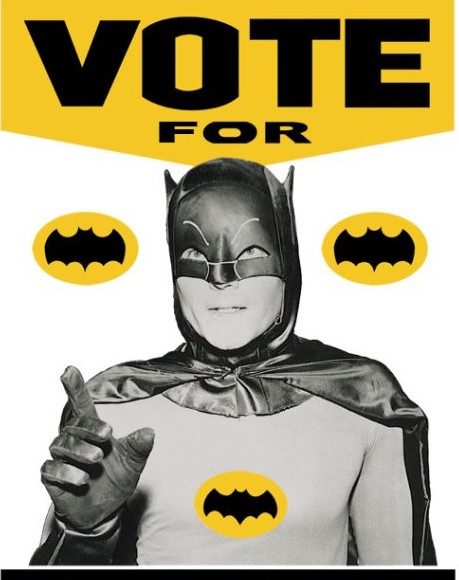 It’s an election year in the United States, and as we approach the Fourth of July holiday, it’s not too early for American citizens to reflect on their constitutional right and civic responsibility to vote.  Candidates will spend time and money to capture the attention of voters, and hopefully citizens will be satisfied with the candidate choices available for their consideration.  If not – and if the citizen lives in a state* that allows write-in votes – a voter has other options.  Citizens can vote for candidates that do not appear on the election ballot.   These candidates – called “write-in candidates”, because voters “write in” the name of the candidate that they would like to vote for on the ballot – allow voters to express their support for issues and candidates that may not appear on the ballot, or to express their dissatisfaction with the available ballot choices.

Although write-in candidates are generally real people, quite often write-in votes are cast for comics characters like Batman, Superman, and Spider-Man. 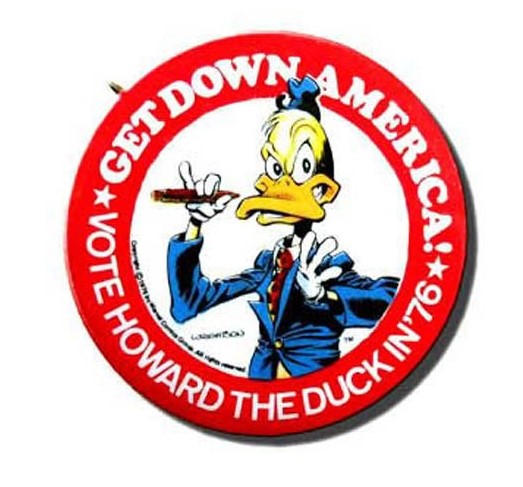 The most organized effort to write-in a comics character on the ballot was undertaken on behalf of Marvel Comics’ Howard the Duck.  Created by writer Steve Gerber and artist Val Mayerik, the satiric anthropomorphic duck ran as a third-party (the fictitious All-Night Party) U.S. Presidential candidate in the pages of Marvel’s Howard the Duck comic book series.  Gerber encouraged fans to support Howard’s fictitious presidential campaign, and even got licensing permission from Marvel to sell Howard campaign buttons directly to fans.  (Political fact – it should be noted that these buttons were illustrated by legendary comics artist Bernie Wrightson.)

In Marvel:  Five Fabulous Decades of the World’s Greatest Comics, former Marvel Comics publisher Stan Lee recalls that Howard received “thousands of write-in votes” for President in 1976.  This claim is difficult to substantiate, as votes for fictitious candidates are not considered valid write-in votes and are not tabulated with the official results.  Howard might have been a popular write-in candidate in 1976, but there are unfortunately no records to verify the total number of write-in votes cast for Howard.

Although local papers across the country often note every election year that votes were cast for comics characters like Snoopy and Superman, without an official tabulation** of fictitious candidates, it’s difficult to gauge how many write-in votes are cast for comics characters.   However, the write-in votes cast for fictional characters are numerous enough to cause concerns about the cost of reviewing write-in votes for these non-valid candidates. The Arizona Republic notes that, in an August 2012 primary vote in Maricopa County, the county had to hire additional election officials to review all the write-in votes (the vast majority of which were non-valid), and prompted an election official to comment on the cost to taxpayers of citizens writing-in fictional candidates:  “They think they’re making some kind of a statement or being cute … The issue is what it costs us, and ultimately costs them, because the taxpayers are paying for the election.”

As a citizen who takes his voting responsibilities seriously, it’s an issue with which I personally struggle. It’s a legitimate argument that write-in votes for comics characters are not valid votes; these votes will not be tabulated, and it requires extra work and money to review votes that ultimately have no effect on the election.  However, it can be argued that write-in votes for comics characters express dissatisfaction with the list of candidates on the ballot, or allow a voter to express their desire for an ideal – if unavailable – candidate.  Ultimately, citizens have a right to express themselves through their votes.

In the past, I’ve picked from the list of candidates that were listed on the ballot.  But this past April, I was unsatisfied with the list of candidates for a local school board election; two school board seats were open, and although I respect the candidates that were running, none advocated solutions for the city’s schools that appealed to me.  Not satisfied with the candidate choices available to me, I wrote-in two comics characters that I love – Batman and Captain America.  Although casting my ballot for two comics characters will do nothing to resolve my school district’s numerous problems, it made me feel good to vote for characters that I admire.  Election officials invalidated my vote, but they couldn’t invalidate my choice.

**The only official ballot result that listed comics characters that I could find was a Rochester Institute of Technology student government ballot; Batman led the pack of write-in candidates with 8 votes, or 0.27% of the votes cast.