In Space No One Can Hear You: On Image Comics Prophet

“I hate to break it to you, but there is no big lie, there is no system, the universe is indifferent”-Mad Men

Guardians Of The Galaxy may be the best film that Marvel has ever produced. It plays on the base level desire to explore and seek out adventure while ultimately rewarding that desire with a happy ending. It’s every child’s fantasy, that maybe you will go into space and become the hero that saves the universe having new and exciting adventures and it’s a fantasy because it willfully ignores much of what we know about life; chiefly that all life’s main concern, from the smallest living organism to it’s largest and most complex, is survival and most living things actions are based on that instinct. For the last two years Brandon Graham, Simon Roy, Farel Dalrymple and Giannis Milonogiannis have been asking a very different question then what is typical of space opera’s on Rob Liefeld’s Prophet. In it, the universe and it’s inhabitants are focused almost exclusively on survival and it is how that instinct is manipulated that determines who wins and loses on a galatic level for species survival. Prophet isn’t about making you feel good about yourself, Prophet is a dark and wonder filled epic that examines the nature of what it means to be a living a organism at it’s very core against the large scale and beautifully rendered back drop of open cosmic space that is as deadly as it is expansive and fascinating creating a series that feels like something created by Jack Kirby if he had subscribed to nihilism as a world view. The main series ended with issue #45 last week and while the story is going to conclude in the upcoming Prophet Earth War series the mainline of books has come to a close as has the unique look into science fiction and space travel that is unlike anything I’ve even seen in comics or anywhere else for that matter. Prophet was a comic that took a distinct look at what it meant to be alive for any and all living things and projected that onto a large scale space science fiction epic that played out in measured and fantastic ways over the course of the series and while it was never the most popular or talked about comic book it was always among the very best being published. It pushed the boundaries of genre and visual story telling to create a plot that was distinctly about everything and nothing simultaneously while truly illustrating just how small you are within the scope of the infinite. 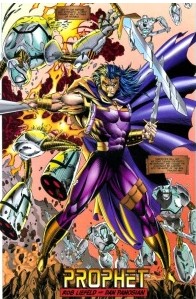 The title Prophet first began in 1993 as a spin off from Rob Liefeld’s Young Blood about a sort of super soldier that wakes up in the future with two giant swords while being on the run from the US Government. It’s debut issue used the first five pages to show lead John Prophet slicing up a bunch of robots while bible scripture appeared in caption boxes above the action until the John Prophet is awakened from his biblical robot genocide dream state by friend Kirby who looked and acted like a cross between Cable and Nick Fury in a bright red and white spandex jump suit. In the text at the  end of the book Liefeld would allude to the character being based off of Rip Van Winkle and Bible stories while he told Wizard magazine that his inspiration for the series came from Star Trek creator Gene Roddenberry and Steven Spielberg. The initial Prophet series would last for 11 issues before being revived in 1995 with Chuck Dixon on writing that lasted for eight issues before the series and character would go down in annals of forgotten comic series until nearly twenty years later when Liefeld would return to Image Comics and relaunch his Extreme line of comics including the title Prophet starting where they had left on issue #21. Liefeld would utilize a creative team of relative unknowns at the time of Simon Roy, Ginannis Milonogiannis, Farel Dalrymple and the teams defacto leader/mouth piece Brandon Graham. Graham was a high school dropout graffiti writer from Seattle Washington that had worked on Manga and Porn comics before launching his own titles King City & Multiple Warheads with Tokyo Pop and Oni Press respectively. He’s an outspoken critic of Marvel and DC Comics,  an unabashed lover of old school hip hop and Conan The Barbarian & has a neck tattoo of an Elephant; in short he was and is like nobody else modern comics. It was this unlikely team that was tasked with relaunching the title that would change it from a biblical Captain America analogue to an epic space opera about humanities place in the known and unknown universe.

In the Graham/Roy/Milonogiannis/Dalrymple version of Prophet what we think is the main protagonist John Prophet comes out of a cryogenic sleep pod in the future to discover that aliens have overtaken the human race and are raising them like cattle. Going forward we would be introduced to many more John Prophets in addition to an expansive cast that would include earth mother, Old John Prophet and relics of Liefeld’s comic book past like Badrock, Die Hard and Supreme all re-imagined for a dark and distant future where humanity has been overtaken by both alien invaders and it’s own hubris. It’s been accused of having no plot which is a misread that is somewhat understandable for the dream like quality of the narrative. What’s probably a better way of describing this version of Prophet is linear plot without limits as the story shift’s from one narrative to another all centered around a version of humanity on the edge of extinction fighting for it’s own survival. It’s art and story are an expansive wide screen look at an infinite universe without any part that is recognizable for modern humanity. It explores the concept of different lifeforms existing in various states and purposes whether that’s the strange bug aliens that harvest humans, the lizard people that at one time were the adopted home of Old John Prophet and his native lover, sentient exoplasms, 5ooo year old cyborgs or large scale beings that fold up in space and float around sleeping. It’s a compelling display of imagination with a narrative through line on the John’s quest for humanities survival with different perspectives and takes on that. The story itself twists and wraps around this idea questioning whether humanity deserves it’s own survival while building out new world after new world at each turn. It’s the rare comic that that could push it’s creation of the surrounding universe to the farthest extremes without losing the thread on the central plot. As the series progressed it would unveil layers upon layers of complexity to the narrative as different aspects of the story were revealed with each new chapter. What starts as a cool look at a sort of dopey superhero that’s tasked with “saving humanity” evolves into an epic space opera that asks whether humanity should be saved at all. This was done with the creative teams astounding visual story telling techniques that would often begin with Graham creating a rough outline for which Roy, Milonogiannis and Dalrymple would build on until they created this expansively wonderful yet dark and dangerous cosmic universe where the fate of humanity played out upon it’s background, with the occasional assist from talented friends along the way including James Stokoe or Ron Wimberly. Under the current team Prophet became a comic that reworked the concept of space and the visual language of comics to fit within their wholly unique vision of this unlikely team of misfit cartoonist as they revived a title everybody else forgot about by completely reinventing it and in some ways the medium itself.

In it’s rebirth Prophet was a comic that was beloved by it’s core fan-base, liked by critics and misunderstood by everybody else. But I have a feeling it’s legacy will be a much a stronger then it’s present standing. We’ve already seen it’s influence permeate itself in different ways; since it’s relaunch other companies have been more apt to redo their own licensed titles in unique ways ceding more control to the creators vision, it’s story telling and structure has gone on to be somewhat of a precursor to other successful titles like Hawkeye, The Manhattan Projects, East Of West, Zero & Moon Knight and it’s creators have already managed to go on to more high profile books with Milonogiannis, Wimberly & Stokoe all doing Marvel work, Dalrymple launching a new OGN, Roy getting on mini series The Field and Graham being among the creators featured at Januarys Image Expo announcing his own ambitious creator owned series that he hoped to be a wide scale universe on par with that of Marvel or DC’s while standing shoulder to shoulder with comic book stars like Grant Morrison, Scott Snyder, Robert Kirkman, Ed Brubaker, Matt Fraction, Bill Willingham and Rick Remender among others. Moreover I think that Prophet will be looked back upon as one of the most important titles of it’s time influencing future comics in the way other game changing creator owned or revamped titles like New Gods, Love & Rockets, Swamp Thing, Doom Patrol. American Flagg, Daredevil, Preacher & Planetary did as the type of title that is timeless and singular in it’s vision and execution. There was never anything like it before or during it’s completion and there probably won’t be anything like it ever again. Brandon Graham, Simon Roy, Giannis Milonogiannis, Farel Dalrymple and co took a title that nobody cared or had thought about in years and not only changed it; but in a lot of ways comics for good. It was an innovative and expansive take on space opera that stretched it’s concepts, story lines and cast to the limit. While it may have fallen short of replicating the infinite nature of a universe it’s the closest anybody has gotten so far and that in and of itself is an achievement. But perhaps most importantly it dared to say that you maybe aren’t the hero, that maybe humanity isn’t the alpha and omega but just one of millions of other living organism’s searching for the same thing and in all actuality there is nothing about us that makes us special. Your ancestors could be an insects cheese burger and in the grand scheme of things it doesn’t matter if that upsets you. No one is going to hear your discontent about it anyway.