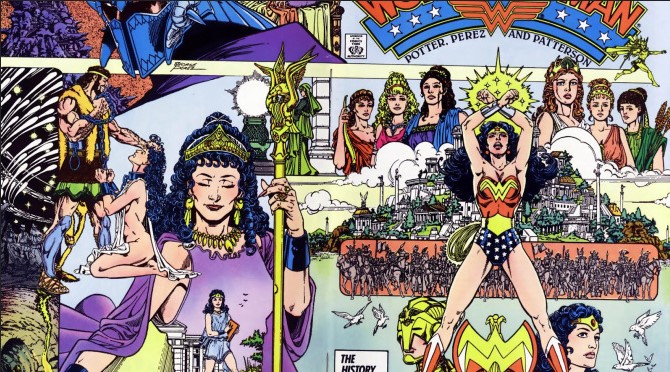 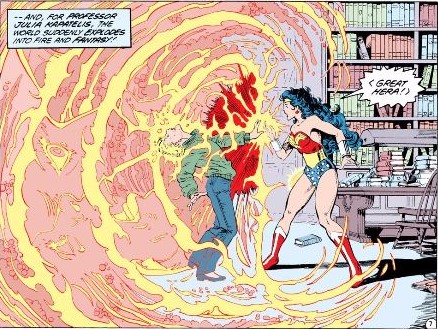 As a comic book that’s been continuously published over a seventy year period, several creators have had a significant influence on the character of Wonder Woman and her mytho’s. Like many of DC Comics superheros, Wonder Woman was redefined for the modern era following the line wide reboot that was Crisis of Infinite Earths. Like Batman with Frank Miller or Superman with John Byrne, Wonder Woman was taken on by one of comics greatest talents of the time, and within a historical context, one of it’s most important creative talents in George Perez. Fresh off his time illustrating Crisis of Infinite Earths, Perez would do a fresh take on the character that leaned into some of the most interesting and functional elements of her mythology without trying to overly define her in any particular direction or style. It’s not perfect, it’s not on the level of Byrne on Superman or Miller on Batman and it’s not essential in the larger context of the medium. But it’s well crafted, looks fantastic and straight up cool on an elemental level; that doesn’t make for a classic comic per-say but it does make for one that’s evergreen.

George Perez came on Wonder Woman following his time illustrating Crisis of Infinite Others, the exact series that would completely redefine DC comics and it’s larger continuity as a whole while ushering in a creative renaissance with the publisher. With a blank slate on past continuity, comics creators were given more freedom on DC’s main titles then ever before while being tasked with creating a baseline for the individual books chief conceit and underlying mythology. Writer Gregg Potter was constructing what Wonder Woman would be in the new DC Universe when Perez was brought on to co-plot and pencil the series. While Potter and editor Janice Race concepts may have been the genesis for Wonder Woman’s post Crisis, it would be Perez whose vision would fully realize the character in his expert visual narration.  If Batman had Frank Miller & Superman had John Byrne, for better or worst, Wonder Woman now had George Perez. 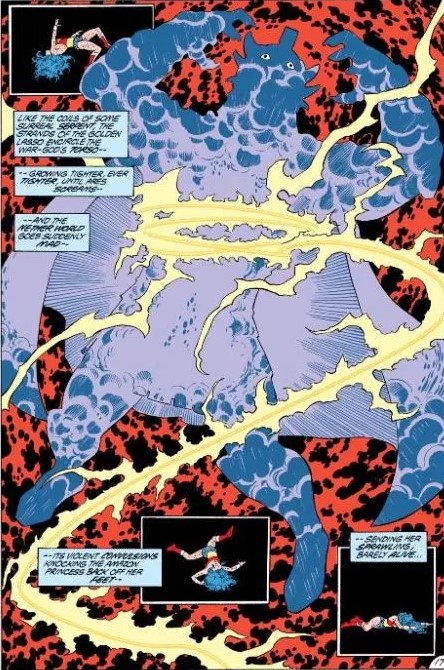 It’s impossible to consider Perez’s time on Wonder Woman outside of the context of DC Comics in the time period. Following Crisis of Infinite Earth and Watchmen; DC’s line of superhero comic as a whole were the best they’d ever been. As expounded on during NBC’s own monthly special from a couple years ago, the sheer volume of iconic material that  DC produced in that time frame is staggering and unprecedented. That paired with the aforementioned comics that proceeded it in Watchmen and Crisis, Frank Millers game changing  The Dark Knight Returns and a handful of fan favorite takes on their vast catalog of superhero’s; the amount of great comics coming out of the publisher in that time period was immense and would set the stage for not only DC but really, comics at large going forward. Artist George Perez is uniquely essential to this period in a couple ways from his work with Marv Wolfman on New Teen Titans & Crisis of Infinite Earths. Wolfman & Perez’s New Teen Titans was a huge shot in the arm for DC Comics in propelling a comic series from being an afterthought to one of it’s leading titles. Borrowing it’s spirit from the success of Claremont’s X-Men, New Teen Titans was notable for re-imagining the team in a way that felt more analogous to actual teenagers; hormones, waves of emotion, questioning authority and a youthful vernacular. While New Teen Titans hasn’t aged as well in respect to it’s style of dialogue and some of it’s story choices, it’s impact is indelible not only for being a hit at the time of it’s release but moreover, for providing a framework by which DC’s Silver Age concepts could thrive in the modern realism that would be a hallmark of comics Bronze Age and the incoming Modern Age that Perez would be essential to in terms of it’s impact on DC Comics. That with the game changer that was Crisis of Infinite Earths solidified George Perez as one of the mediums best and more forward thinking creators of the time period. Giving the artist free reign of it’s mainline Wonder Woman series following that success was a no brainier.

Yet while Perez was a key figure in a couple of iconic comics series that directly led into one of DC Comic’s most iconic periods, Perez’s Wonder Woman in and of itself falls short on those heights, however unfair that standard may actually be. It leans more closer to a traditional superhero comic at a time when the best superhero comics were bucking convention and it has a strain of dialogue that while common for it’s time, was about to be made obsolete from the literary and cinematic influences of Alan Moore, Frank Miller or Grant Morrison, an evolution in writing that would become the standard going forward. While Miller’s Batman or Byrne’s Superman attempted to place the hero’s in a modern context of the time period, Perez’s Wonder Woman is far more insular. It’s comparable to Walt Simonson’s run on Mighty Thor for how it synthesize the character’s link to ancient mythology but with several co-writers and inkers, it lacks the singular vision that makes a book like Mighty Thor by Simonson so special. Yet falling short of iconic or ground breaking doesn’t in any way equate to bad in terms of Perez’s Wonder Woman because if you take it for what it is, that in itself is pretty much awesome. 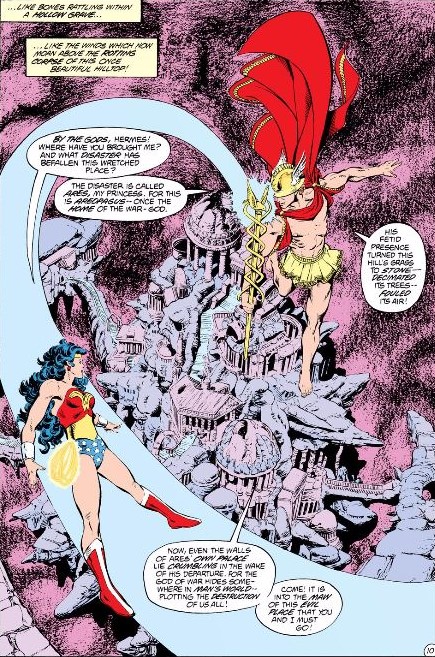 I use the word awesome specifically to describe Perez’s Wonder Woman run in that beyond it’s occasional fall into conventional and soon to be dated superhero trappings, it’s an immensely enjoyable experience in a way that is probably best described as Heavy Metal. Heavy Metal in terms that fall between comics venn diagram of the iconic European anthology and musical genre for it’s scope and sensibility. Perhaps best exemplified in the series opening arc, Gods & Mortals,  Perez’s Wonder Woman is a highly imaginative retelling of the character’s origin starting at the liberation of the Amazon’s to Diana’s introduction in man’s world at large. While that’s all feel’s like well tread territory in the context of the present, it all starts here as Perez and co. concisely strip down the character and her surrounding mythology to it’s basic’s in a way that allows for the books main character to be the central focus. Traditional Wonder Woman supporting cast member are mainly just that, they’re supporting figures as the series conceit is for the comic to be purely about Wonder Woman herself and the unique world she navigates. But while the approach may be streamlined, the content itself is dense and subtly enveloping.  Partially this is from George Potter and later Len Wein’s scripting and the way it leaned in on dialogue but moreover, it comes from the way that Perez and co. use the relative simplicity of it’s setting to allow for a plot that weave’s the books origins, mythology and mainline story seamlessly. Gods & Mortals is ultimately a comic about Wonder Woman fighting Greek God of War Ares, but it pace’s itself out to give the book and it’s fantastical setting a lived in feeling. George Perez masterful skill as an illustrator and visual storyteller is ultimately what elevates his Wonder Woman work in it’s technical brilliance and boundless imagination. Perez was just coming off his peak as a comics illustrator on Crisis and it shows in the pages of Wonder Woman. Perez had an innate understanding of leveraging traditional superhero style comics with innovations in visual storytelling that gave the book it’s creative flourishes. Perez is never as stylized as Frank Miller, David Mazzuchelli , Walt Simonson or Mike Grell but he’s doing far more in his more streamlined approach then some of the more comparable contemporaries like John Byrne, Jerry Ordway or Sal Buscema. 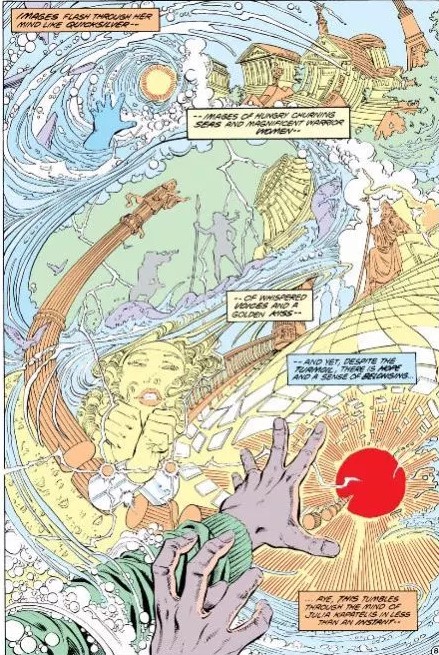 As a superhero comics fan, it’d be hard to walk away from George Perez’s Wonder Woman without finding a lot to enjoy but it’s also hard to take away much more then that as a whole. It’s the classic example of good, not great. When we talk about Wonder Woman and how the title has struggled on some level to sustain the same popularity as similar DC superhero’s like Batman, Superman, The Flash or Green Lantern; the reasons are numerous. Part of it lies in the inherent sexism of western culture and the particular strain of it that’s continues to infect the comics medium as a whole, part of it is poor editorial decisions by DC Comics, part of it could be that she’s consistently been written from the perspective of a male for the majority of the titles history and part of it is the wrong headed perception that there is anything wrong with Wonder Woman that needs fixing in the first place. But I wonder if part of is also that following Crisis of Infinite Earths, George Perez vision and execution of Wonder Woman wasn’t up to what would be the otherworldly heights that his peers achieved on similar series. Frank Miller & John Byrne’s time on Batman & Superman respectively, are considered classics of the genre as are similar comics series of the time period from DC like Mark Waid on The Flash, John Ostrander & Kim Yale on Suicide Squad, Mike Grell on Green Arrow or Grant Morrison on Animal Man and Doom Patrol.  By those standards, Perez’s Wonder Woman falls short and those standards are what continue to define DC Comics at their best. But that also negates a lot of what Perez did very well on Wonder Woman and how much of that is intrinsic to the character. Because what Perez did understand was that being feminine and a bad motherfucker are not mutually exclusive, they can be done so together subtlety and the context  of Wonder Woman within ancient Greek mythology is inherently awesome in the purest sense of the word. Perez made Wonder Woman Metal, and while that’s not all she is, that in an of itself is pretty cool and in terms of how he’d end up defining the character, that’s been the best part of her comics ever since. Perez didn’t do as much for Wonder Woman as his peers might have for similar DC supherhero’s, but he did to define her in a modern context that made sense to the character overall and in hindsight, maybe that’s all she ever needed.