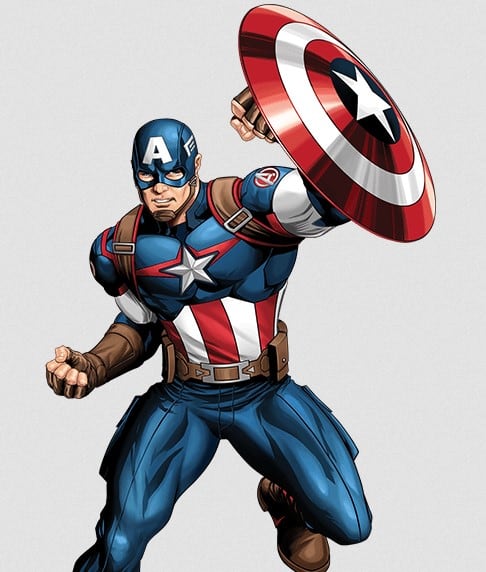 Captain America fans know that the superhero’s alter ego is Steve Rogers, but when Republic Pictures filmed its licensed Captain America movie serial in 1943, it created a different alter ego for the character.

The Republic movie serial differed greatly from the adventures of the Captain America character depicted in the comic books published by Timely Comics (now Marvel Comics).  In the comics, a determined weakling named Steve Rogers refuses to accept that he is unfit for military service.  Rogers volunteers for an experiment that transforms him into a super-solider.  Garbed in a bright red, white, and blue costume and armed with a matching shield, Captain America and his young costumed sidekick Bucky fight the Nazis and other American enemies during World War II.

In the film, Captain America is secretly District Attorney Grant Gardner, who dons the Captain America costume to foil the schemes of the evil scientist known as the Scarab.  The movie provides no background as to why Gardner fights crime as Captain America, and there is no reference to any superhuman abilities.  Republic’s Captain America does not have a costumed sidekick, and, instead of a shield, carries a .38 revolver handgun.  The roles of Captain America/Grant Gardner were played by Dick Purcell, a veteran actor who some considered too old and overweight to play the athletic role.  (Indeed, Purcell died from a heart attack just a few weeks after the filming for Captain America was completed.)

Timely Comics’ publisher Martin Goodman was upset about the changes made to the Captain America character in the film.  The character’s use of a gun (which might upset the parents of Timely’s young comic book customers), as well the elimination of any reference to the character’s military adventures (a facet of the character that was engaging to comics readers during wartime), were considered unacceptable, and Timely complained to Republic Pictures about the changes.

As noted by film historians Jim Harmon and Donald F. Glut in their book The Great Movie Serials:  Their Sound and Fury:  “…Republic coldly informed Timely that the sample comic book pages sent them by the publishers in no way indicated that Captain America was a soldier named Steve Rogers and that he did not carry a revolver.  Furthermore, since the serial was well into production, they could not and would not return to the original concept through costly retakes, nor undergo expensive and unsatisfactory dubbing in of the name Steve Rogers over Grant Gardner.  Since Republic was under no contractual obligations to do any of these things, the matter was closed.”