The Science of The Multiverse in Modern Comics

The concept of a multiverse, multiple versions of one universe existing in parallel to one another, has been a staple of science fiction and by extension comics for quite some time. At times the multiverse concept can feel like a crutch but still some of the best stories in the history of the comics medium have leaned on that plot thread. All time classics like Crisis Of Infinite Earths have been based around the concept of a multiverse, where as legendary and current top creators like Grant Morrison, Warren Ellis, Joe Casey, Jim Starlin, Stever Gerber, Geoff Johns, Jonathan Hickman & Rick Remender have all made the usage of a multiverse a central focus of their stories to great effect. But the multiverse isn’t a concept that is exclusive to fiction as scientific theory has also begun to explore the existence of a multiverse within the reality that we are  sharing now. The existence of the multiverse is a topic that is debated in the scientific community and has many variations as well as retractors. Scientist Paul Davies had a particularly scathing refutation of the multiverse concept in the New York Times that takes to task the very premise of the theory and the motivations of scientist exploring it. But with that said, great scientific minds such Stephen Hawking, Neil deGrasse Tyson, Steven Weinberg & Brian Greene all feel that the theory of the multiverse has a very strong foundation in modern physics and astronomy.

String physicist Brian Greene has identified nine types of multiverses that encompass everything from the idea of pocket bubble universes to simulated universes to every possible mathematical and physical possibility happening simultaneously. Perhaps the easiest to understand and most probable is the Quilted Theory of the multiverse. The Quilted Theory states that if the universe is indeed infinite, then the conditions that created our known universe are bound to repeat themselves infinitely over the physical stretch of the space-time continuum. Basically what it’s saying is that with an unlimited amount of chances, the conditions that make up our known universe are bound to repeat themselves. Grant Morrison’s Multiversity seems to be operating under this assumption; although, it caps the amount of multiple universes to 52 because Dan DiDio seems to have some strange fascination with the number. What that means in the context of the series has yet to be revealed, but the basic concept of the quilted theory is front and center in the opening pages of Multiversity #1 where Morrison writes, “Where ever life can take root….no matter how great, no matter how small, life will thrive & life will prosper,” basically echoing the quilted theories premise. What’s interesting about Multiversity is how it interprets those idea’s within fictional parameters of DC Comics. Right off the top, the DC Multiverse team encounters a “ultraverse” which mirrors rival company Marvel’s own superhero properties while in later versions we’ve seen different universes based around old pulp properties or modern celebrity culture analogues of the companies main line of super heroes. Multiversity shows the travel of the team through space from one version of earth to another much like what would be necessary if you are taking the quilted-verse theory at face value. That the most probable scientific theory of the multiverse has been best used in a 2014 comic is probably not a coincidence, as the easier it is to understand, the more room Morrison has for crafting an engaging story. 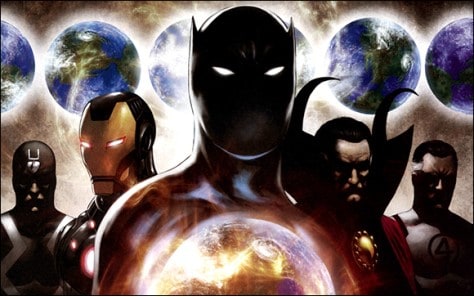 In contrast, Jonathan Hickman’s New Avengers for Marvel comics has been exploring the concept of the multiverse from the perspective of Cyclical Brane Theory. In theoretical physics, a brane is “a physical object that generalizes the notion of a point particle to higher dimensions” (Wikipedia). The concept was initially based on a debunked theory of Albert Einstein that the universe was not only expanding but also contracting. While the theory itself has been proven wrong, the basic concept has evolved into this idea that big bangs are caused by the expansion and contraction of “brane universes,” which, simply put, bump up against one another. It’s actually much more complicated, but, in relation to Hickman’s New Avengers, the concept is basically the same as parallel universes are bumping into and in effect destroying one another. Hickman uses this concept to ask a moral question of how far would these heroes go to save their world from being destroyed by another. It’s a fascinating, if inconsistent, character study that uses its scientific concept as the engine for the plot and character development.  New Avengers isn’t 100% faithful to the real life theory, but it uses it instead within the fictional Marvel universe to answer age-old philosophical questions on the nature of morality. It’s an interesting look at humanity through the prism of scientific theory that asks what if this was correct and we had super humans that could stop it?

Perhaps the most complicated, yet plausible, example for a possible multiverse is the Quantum Multiverse Theory, or many worlds theory. The idea is based around a concept of quantum physics that every possible thing that could have happened has actually happened in an alternate universe. To put it simply, the concept is basically anything that could happen has and will happen. The Quantum Theory seems far less interested in the physical science behind the possible multiverse and more in the mathematical probility. Comics’ best modern analogue would be Black Science by Rick Remender and Mattero Scalera. Remender is a writer who loves science fiction but tends to leave most of the actual science to the imagination, so the mechanics of the story are left up to the reader. But, taking the central ideas at face value, Black Science seems to be exploring a multiverse where literally anything is possible. Part of this is a function of the comic existing in its own universe in comparrision to Multiversity & New Avengers, which are tied into larger comic book continuity on some level no matter how far they may stray from it. The world of Black Science only exists in the comic (as far as we know muhahaha), and the limitations are only in the imaginations of Remender & Scalera. One universe has frogs evolving into the dominant species, while the next has Native Americans still controlling the continent and at war with Nazi Germany. It is truly a multiverse wherein every interpretation of our world is in play, and because of that perhaps the only scientific theory that could hold Black Science is Quantum Multiverse. Whether or not the theory has any real influence on the comic, it does give it some context and makes what is already a fascinating series even more engaging.

While the connection between real life science of the multiverse and it’s use in fictional comic books isn’t entirely synchronized, it’s approaching the same ideas from different places. In Warren Ellis’s most recent news letter, he quotes Rebecca Newberger Goldstein saying,

“It is science that we have to rely on… but we need philosophy to make clear exactly how much is implied by the scientific findings…philosophy is joined at the hip to science.”

For all intents and purposes, we can look at modern popular culture as the carrier for philosophy in the 21st century. Whether that’s Christopher Nolan having Batman, Harvey Dent & the Joker wax poetic on the merits of Kant’s theory of perception; utilitarianism vs nihilism; or a meth cook telling Woody Harrelson time is a flat circle on a HBO show; movies, film, literature, and music are where philosophy worms its way into the public’s conscious (it goes to die on cable news programs). Comics exist as a huge touchstone of popular culture, and when they explore the multiverse concept they’re trying to make sense of what the science may tell us. Mulitversity, New Avengers & Black Science are asking questions about the multiverse theory that science can’t and in the process introducing it to readers. Where it goes from there is anybody’s guess, but the seed is planted and the ideas are traveling. At least we know that for a fact with this world, who knows what they are thinking throughout the theoretical parallel reality that could exist across the universe, in a brane or across the space-time continuum. There could be another Grant Morrison & Jonathan Hickman who’ve figured it all out already somewhere in the great scientific unknown, maybe Rick Remender is that worlds president.