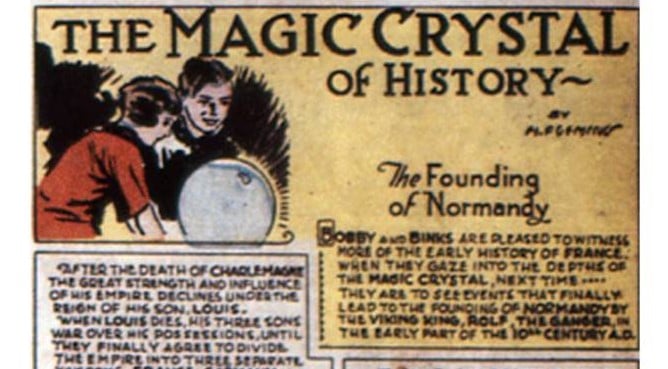 Whether it’s Superboy visiting the future to hang out with a legion of teenage superheroes, or X-Men traveling back in time to prevent the creation of an anti-mutant future, time travel is a long-standing plot device in comic books. In fact, a fantasy time travel adventure strip appeared in the very first comic book to feature solely original content, New Fun: The Big Comic Magazine #1 (cover dated February 1935); the title of the strip was The Magic Crystal of History.

In the strip, two young siblings – brother Bobby and sister Binks – are transported back in time by a magic crystal ball. In stories published consecutively from issues 1 through 10, the two-page feature depicted Bobby and Binks having adventures in a variety of time periods; the children return to the present at the conclusion of each adventure. When the strip resumed in issue 12, the premise of the strip changed – Bobby and Binks no longer have time travel adventures in the past, but instead remain in the present, passively observing historic moments via their crystal ball.

A far cry from Sally the Sleuth, Barreaux’s The Magic Crystal of History strip appeared in 48 issues of New Fun (the title of the comic was changed to More Fun with issue 7) and has the distinction of showcasing the first time traveling characters to appear in comic books.