Acclaimed comics writer Alan Moore has several distinctive physical characteristics — he is over six feet tall, has long hair and a thick beard, and wears large rings on his hands. But Moore’s beard is arguably his most iconic feature; the beard is often highlighted by Moore’s caricaturists and has inspired both satire and song. But what inspired Moore to cultivate his voluminous whiskers? It turns out that the origin of Moore’s beard dates back to a challenging but eventful time in the writer’s life.

In Magic Words: The Extraordinary Life of Alan Moore, author Lance Parkin provides an extensive biography of the writer who has crafted such notable comics as Watchmen, V for Vendetta, and The League of Extraordinary Gentlemen. In 1953, Moore was born into a working-class family in Northampton, England. Despite the economic disadvantages of his upbringing, Moore’s precocious intellect earned him a spot at the academically rigorous secondary school, Northampton School for Boys.

Through education, Moore had the potential to advance from the working class to the middle class. But Moore was unhappy at the school; he was no longer the top student in his class, as he now competed with middle-class schoolmates that had received primary school instruction in subjects key to the school’s curriculum, such as Latin and algebra, and Moore had not. 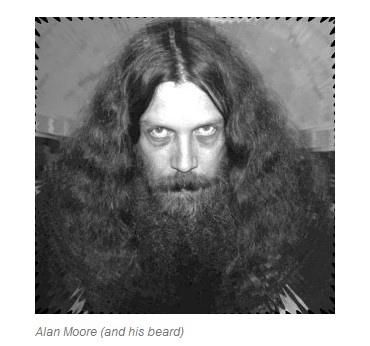 However, Moore did find expression for his artistic interests by sharing his poetry and other writings in his self-published fanzine, Embryo, and became more involved with comics and comics fandom; in 1968, he was a supporting member of Britain’s first comics convention.

Moore was also interested in the 1960s American counterculture. This interest inspired him to let his hair become shaggy, and directed his attention towards drugs. Influenced by Timothy Leary’s advocacy of psychedelic drug use as a method to advance human development, Moore began taking and selling LSD. As a result, he was soon expelled from school at the age of 17, and his bright prospects disintegrated. Moore was forced to take work as a low-wage laborer.

Around this time, Moore joined the Northampton Arts Lab. This arts center encouraged participants’ creative experimentation, and Moore wrote and recited poetry for the lab. Although Moore’s life seemed bleak, his association with the lab provided a creative outlet and a steady group of friends.

The genesis of Moore’s beard was an international adventure with his arts lab friends. Parkin notes that Moore and his friends “wore their hair long, and they smoked dope on camping trips to Salisbury Plain, Scotland and Amsterdam. Arriving in Holland, on his first trip abroad when he was eighteen or nineteen, Moore was told by a Dutch customs official that his long hair made him look like a girl. So he began growing a beard [emphasis added].”

Years later, sporting a thick beard, Moore had great success as a comics creator and became a vocal critic of comics industry practices that he believes benefit corporations at the expense of creators and the medium. Moore’s countercultural beard — initially inspired by a comment from an authority figure, and Moore’s apparent insecurities about appearing feminine — is a fitting style for a gifted, outspoken comics creator who rose from humble beginnings to challenge comics culture with the righteousness and confidence of a modern, hirsute prophet.