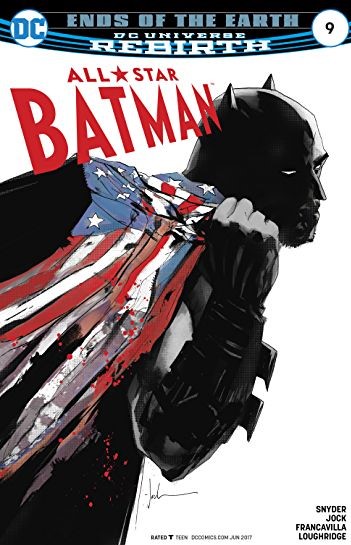 Snyder wraps up the second arc of his new Bat-book, revealing the grand architect of the planet destroying virus. All the common tropes are here that we expect from modern Batman stories, but do they land?

Both this issue and Nightwing #19 strongly reminded me of Grant Morrison’s Bat saga, but for different reasons. Nightwing flat-out used a villain and theme that Morrison had prior, while Snyder’s plotting and resolution feel more overt and somehow less impactful.

Someone has coerced/manipulated other Gotham villains to play a part in a doomsday scenario, in service to another villain’s Machiavellian scheme. It’s been done before, perhaps most famously in Batman: Hush. It might be the lag-time between readings, but Mr.Freeze, Poison Ivy, and Mad Hatter’s roles in this all feel sort of happenstance which might be intentional on Snyder’s part. However, the big reveal (which I won’t spoil) and the ending fight revolving around the Bat-God trope feel underwhelming. In fact, Batman wins so easily that the whole fight seems sort of pointless upon reflection.

It gave Jock some cool panels to draw, no question, but as to their necessity to the story there isn’t much. I will say that Jock’s art does give the story a little more personality than it deserves, and its of his usual impeccable skill which automatically raises up the issue itself. In fact, All-Star Batman all around has had a strong running of artists which continues here with Jock.

However, that doesn’t make up for the feeling that I just read Morrison-lite Batman. The issue is not bad on its own, but does feel disappointing taken in view with the previous installments. The point of this series is to tell bigger and better Batman stories, to paraphrase Snyder himself, and the first story arc involving a road-trip with Two-Face qualifies for that. This doesn’t feel bigger or better, but more of the same that we’ve gotten over the past several years. Aside from the Mad Hatter issue, I think other points in this arc were gripping and well-utilized with their respective villains, Snyder should focus more on that going forward, instead of any grandiose plots of Batman saving the world. There’s a place for those, but they need to be spaced out in the near future.