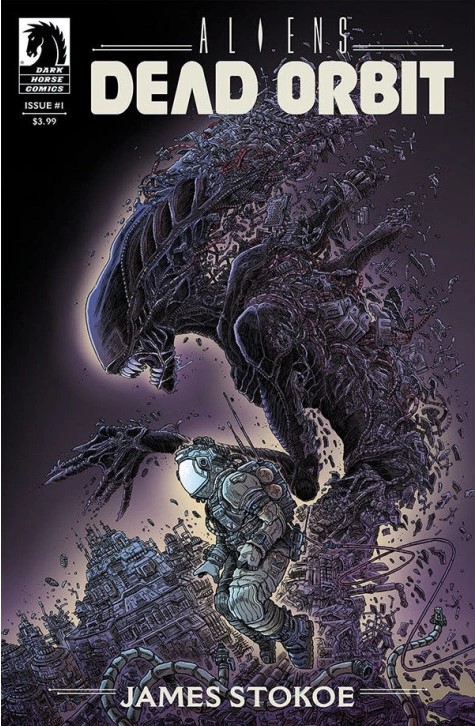 Since Ridley Scott’s Alien debuted in theaters,  there have been comic book adaptations of the film. As the popularity of the movie increased and became a series of related franchise films spanning across decades,  the amount of comics associated to the property has increased exponentially. The sheer volume of material in the medium based on the concept could probably rival some b-list Marvel or DC characters at this point, and one thing that’s become abundantly clear is that Aliens works best in comics with  a highly expressive visual artist in a singular style. That’s  not an accident, it’s ingrained in the original films DNA from the design work of Moebius and HR Giger. This is apparent in the original adaptation by Walt Simonson in Heavy Metal, through some of the early Dark Horse series with Mike Mignola & Sam Kieth, up to the more recent Predator: Fire & Stone or Predator vs Judge Dredd vs Aliens by Chris Mooneyham. The upcoming debut of Aliens Dead Orbit, created in totality by one of comics best current artist James Stokoe, continues on that trajectory with one of the mediums best adaptations of the material in years. The first issue exemplifies the creators mastery of craft with his singular imaginative vision, while standing out for the way it utilizes the framework of the horror genre that the films are based in.

Dead Orbit exist outside any of the associated films, but it retains the spirit of the original film’s grounded perspective by placing the setting on a random intergalactic gas station that feel’s similar to the movie’s cargo ship. The station’s crew explores a rouge freighter vehicle in their vicinity that’s not responding to radio communications. While elements of the issue progress from that premise in ways that will fell familar to anybody whose engaged with the franchise, Stokoe does so in way’s that distinguish Dead Orbit. For all the praise he get’s for his illustrations,  Stokoe is a underrated for his comics writting. His dialogue work in longer running series like Orc Stain or Godzilla The Half Century War stands out for it’s casual yet personable engagement within the story and while it’s probably fair to ascertain that his visual imagination drive’s a lot of his narrative, his comics never skimp on the writing fundamentals that drives creative storytelling. Dead Orbit is unique in that way for Stokoe as it exists within the horror fabric of the original film, a genre that’s yet to be approached by the creator in any of his most recent major comics works. Going from the creators Orc Stain through his most recent sting of Marvel books,  so much of Stokoe’s visual storytelling has been defined by it’s bombast. The artist’s incredible gift for detail and scope combined with his near limitless imagination begs for stylized volume. Dead Orbit differentiates itself from those proceeding series for it’s restraint. Readers expecting Orc Stain in space may be disappointed, but Dead Orbit displays a range from Stokoe that makes for some of his best work  purely as a writer. 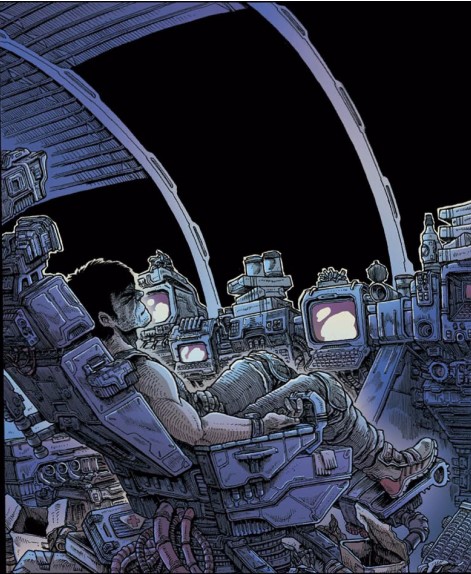 Of course, it’d be absurd to divorce comics writing from the art as the two are interconnected, and especially so with Stokoe as he is one of modern comics most gifted and visionary artist. Dead Orbit represents somewhat of a unique variation in Stokoe’s comics art in it’s color contrast. While much of his coloring on prior series was primarily hue’d in bright oranges against ever so slightly muted greens and blues, Dead Orbit is a darker palette. While that aforementioned color style certainly has it’s spots in the series debut, it’s contrasted from a darker shade of blue & grey with pure black as the most prominent primary backdrop. In terms of the artists pencil and inking work, it’s as masterful as should be expected from Stokoe, and a visual delight for it’s immersive details. Stokoe’s intense line work is mesmerizing with near flawless symmetry, while his character work and overall design  stays true to the artists roots in manga for it’s cartoonish singularity. He’s an expert visual storyteller which is fully utilized in Dead Orbit, with particularly engrossing sequences involving the franchises cryogenic freezing convention and the contrast of noise against sterile silence that are especially notable from the first issue, but it flows with a dynamic and visceral fluidity throughout. 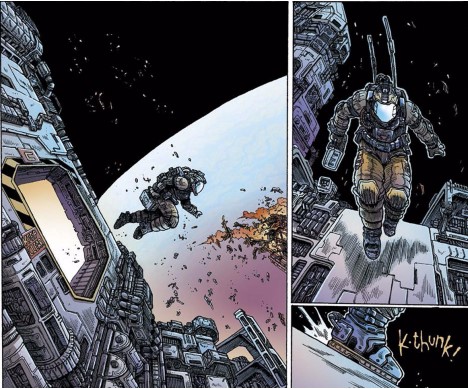 While Dead Orbit certainly adheres to the Alien franchise, it’s vision and execution is purely in the style of James Stokoe, a comics creator that proved to be one of the best and most outstanding of this decade. Alien Dead Orbit is like a lot of other Alien comics and films, in addition to being a lot like James Stokoe’s past comics; but it’s also unlike anything from either sources in certain ways that are exciting and engrossing. It’s been awhile since Stokoe has done a long running series as the sole writer and artist, and Aliens Dead Orbit #1 brings the same enveloping comics as his past work in  a setting that is both familiar, but reconfigured just enough for the creators sensibilities. Regardless of source material, Aliens Dead Orbit #1 is an outstanding single issue comic that bodes well for the series future.

Disclosure: Publisher Bark Horse Comics provided a review copy of this comic to Nothing But Comics without any payment between the site and publisher or agreement on the review’s content.