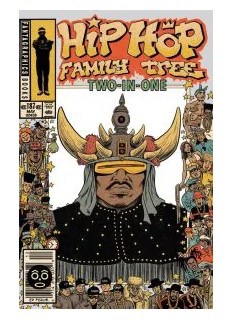 I’m not sure how large the venn diagram is for Hip Hop and comic book obsessives but if it’s just me, Wu-Tang Clan, MF Doom, The Fan Bros & Ed Piskor then that is absolutely fine by me as his Hip Hop Family Tree single issue offering via Fantagraphics for Free Comic Book Day is a fantastic overview of rap and hip hop’s early days that tells stories of the artforms past filtered through Piskor’s own unique viewpoint. Hip Hop Family Tree was originally collected by Fantagraphics last year  telling the story of the artform from 1975 to 1981 and there are already plans for an extended collection covering more history in a two book edition. The FCBD issue starts off with an introduction from Piskor himself that set’s the stage for the magic this comic is about to conjure as Piskor illustrates why he loves both comics and hip hop by showing their similarities including an amazing panel on the opening page featuring Daredevil and Spiderman in a freestyle cipher. I repeat Daredevil & Spiderman in a freestyle cipher. Pretty much this was the comic that was born for me. From there Piskor illustrates stories from hip-hop’s past that are equal parts informative, engaging, touching, hilarious and all around amazing.  Highlights include a super adorable young Reverend Run as Kurtis Blows DJ and later getting DMC to start rapping with him as Darryl casually reads an issue of the X-Men, a story about KRS One as a homeless youth killing battle raps, seeking knowledge and getting his MC name from associating with Hare Krishna’s, Too Short figuring out his business plan to sustain his rap career or Rick Rubin’s transition from punk rock to hip hop as the Beastie Boys play the background. In addition the comic itself is filled with print illustrations from guest artists from groups of raps past including an amazing Toby Cypress illustration of the legendary Kool DJ Red Alert, Geto Boys by Jasen Lex and Kool Moe Dee by John Negron among others. Again this is a niche subject being done in a niche medium so it’s probably not for everyone but if you happen to fall in said venn diagram listed above this is the perfect comic book for you.