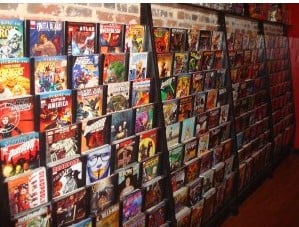 A Day in the Comic Shop…

In Ohio, there is a store. In this store, there are Nerds. Nerds are magical people who hate sunlight, vegetables, and sports…

Not really, can you imagine? This store in Ohio I mentioned; it’s run by PEOPLE. People who have feelings and personalities, right? They’re not just walking stereotypes you would see off a popular Sitcom.

I was hanging out in my Local Comic Shop, Superfly Comics and Games, last Saturday, and was on the verge of considering leaving. I go there at least once a month and hang out awhile, and I’ve known the owners for a good few years. There had been a lot of foot traffic that day, 20-30 people just walking in, scoping the goods and walking back out again.

As one group was leaving, one of them turned and asked the owner “Has Sheldon been in here yet?” Tony, one of the managers; just played it off and said “Not yet, thank god”. So the group just laughed collectively and left. It was then I learned that this was not an uncommon occurrence. Apparently this kind of thing happened enough that Tony was just a bit sick of it.

Let’s back up some. On TBS, CBS, and probably a handful of others; there is a show called “The Big Bang Theory”. It’s about 4 nerds who love everything geek-related, who struggle to understand women and engage in typical Sitcom hijinks (but with a geek twist!). The most popular character is Sheldon; an anal, narcissistic, persnickety, OCD  physicist who riffles through back issue bins in a comic shop repeating “Got it, got it, got it, got it, got it, got it, got it”. The store owner is named Stuart; he is shy, pathetic, and constantly trying to avoid homelessness. Nobody would seriously want to be like those two.

So you can see why Tony would be annoyed at being compared or even associated with characters like that. I guess stuff like that has happened enough that he even put up Anti-Sheldon signs, asking costumers not to go through his back issues saying “Got it, got it, got it”. I think they should be just a smidge bigger. Some people will come into his store, pick up his merchandise, hold it up and laugh with their friends, and then just leave. Sometimes they’ll make a TBBT reference and laugh at their own creativity. It’s gotten worse as “The Big Bang Theory” has gotten more popular.

I asked Tony, just how often does this kind of thing happen? “Not as often as it used too, and it usually happens in waves”. Man, does anybody have to face such an annoyance in unexpected, quick succession like that?

Look, I’ll be honest; I like “The Big Bang Theory”. It makes me laugh occasionally and its characters talk about comics and Sci-Fi on a regular basis. I get the jokes though. I understand why this stuff is meant to be funny. Like all Sitcoms, or even most TV shows, most of the characters are stereotypical. All of that is fine until you start acting like what you see on TV is what the real world is like.

Let me recount my own experiences with a similar incident. I was in a different shop a few months back, getting ready to pay for my books. Four young people walked into the store. One of them told the others (just loud enough to be heard all over the store) “This must be where all the virgins live!” Roll on snare drum. NOT! I thought about saying something, but I thought it was easier to just walk away. Stupid is as stupid does, it’s been said. I dealt with that stuff it high school, four years ago. It wasn’t funny then, it isn’t funny now.  So I can understand how Tony feels here to a certain extent.

I asked him “What would you like done about this?”  He doesn’t want to stifle people’s interests, or talk badly about what others like. “I want people to ‘get’ the joke. Instead of people laughing AT the nerds, maybe learn to laugh with them”. It seems like people are just slumming it in his store, making fun of him and his costumers to their face, and just leaving like its nothing. For someone that works hard running their own business, that’s got to sting. “We try to create a unique atmosphere for people and to even be unique from other comic book stores”. I’ll attest to this; I‘ve been to several comic book stores in my lifetime and Superfly remains my all-time favorite. I’ve seen all kinds of people walk in there, and everyone’s greeted with a welcome good-natured attitude. Even on that day, Tony was polite and said goodbye to the group that asked about Sheldon, even though it may have been the 100th group to have done so.

So you may be asking, “What’s to be done about this?” There’s no petition to sign, no place to protest. Nobody to tweet at angrily on Twitter. This is something that’s probably gonna go on for a while. I don’t have any suggestions for someone who sees this happen at their store, other than to buy something and tell the person behind the counter ‘Thanks for putting up with that kind of stuff’. However, if you’re feeling brave, and you’ve got the words; speak out. Talk with these people (talk, not scream or attack) about why they’re wrong and suggest they reevaluate how they look at the show. Try to get them to laugh WITH the nerds instead of AT the nerds.

Next week; Where is that Ultron book?