In honor of Wonder Woman’s 75th anniversary, I wanted to put my thoughts in at one of the most relevant and complex aspects of her character: what she wears when she fights for truth and justice…What superheroes wear is important. What superheroines wear is even more important. A hero’s uniform makes them instantly recognizable (and marketable) to readers. It helps to establish visually what the character represents: Flash is fast, so he wears red all over, etc. Superheroines costumes often are drawn to be sexy instead of practical, and garner criticism from readers about the inherent sexism of drawing one sex to be depicted as strong and powerful while the other is just supposed to titillate. Changing their look proves to be a challenge in itself as the readers often reject the new outfit. There’s easy fixes for some; zipping up Catwoman’s skintight leather outfit all the way to her neck allows her to be sexy without feeling exploitative. Then there’s some like Power-Girl, whose trademark boob window is tied to her appearance. This is not dissimilar to Wonder Woman’s trademark onesie, which she has almost consistently worn since her debut in 1941. 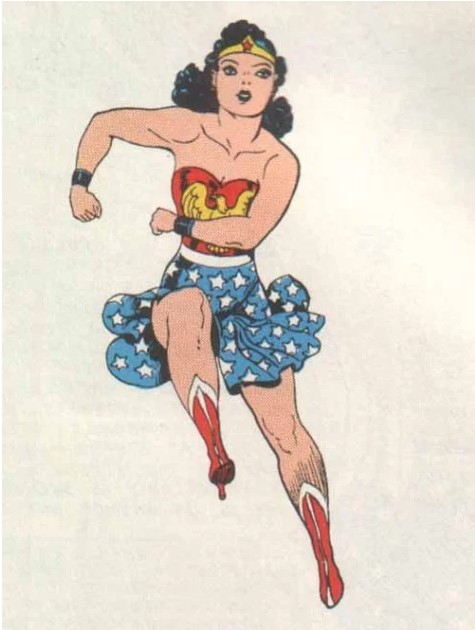 Various parts of WW’s outfit can be easily explained, if not justified: the tiara represents her status as a princess of the Amazons, the bracelets for women’s subjugation to the patriarchy, the skirt to show off her gams. Being conceived in the 1940’s, Wonder Woman’s outfit was destined to become dated pretty quickly. Even Batman and the Jay Garrick Flash’s original outfits seem pretty quirky by today’s standards. Regardless, aside from shortening the skirt to something resembling underwear, her costume has mainly consisted of her original look while Superman and Batman’s have regularly been updated.

The earliest, and most notable, attempt to update Wonder Woman occurred in the 1960’s under Dennis O’Neil. O’Neil was famous for his revitalization of the Dark Knight, but his work with more fantastical characters like Superman and Wonder Woman was often mired. His approach to Diana was to depower her, kill off Steve Trevor, get rid of her classic look and have her learn Kung Fu from a blind Asian man. Personally, the idea of a female hero who takes an active interest in fashion strikes me as a sensible and forward-thinking concept, but not one that should concern Wonder Woman. Maybe if she really wanted to experience life as an American woman, but that doesn’t ring true here. O’Neil’s run is considered one of the low points for the character, to which he freely admits to. I have to wonder if the 90’s weren’t much worse though. Redesigned by Jim Lee in 2010, it was a brief change-up which seemed to win support from no one. Despite covering up most of Diana’s body, and swapping the heels for more sensible shoes, it never caught on. Maybe the added effect of seeing it partly recreated for an unreleased pilot only added to the problems. Either Diana’s outfit is overly-sexualised and in desperate need of a revamp or the new look is rejected  straight-off. Somehow, the two never seem to meet at the same time. A major selling point for Wonder Woman is her look, but then her look is so outdated that it must be bad for women? A few years ago, I read an interesting rule of thumb regarding clothes: “Fashion changes constantly, but style is timeless”. Every single time Wonder Woman’s look is changed to be “modern”, it will inevitably go out of style in at least a year. Her iconic look is iconic because it’s part of her creation and history. Partially due to her first live-action movie, and maybe resignation, DC has changed Diana’s look yet again that closely resembles her original outfit. In a nutshell, consider this: Wonder Woman comes from an isolated society of warrior women who withdrew from the World and ancient Greece hundreds of years ago. Despite living entirely free of the outside world’s influence, the Amazons are considered more enlightened if less industrial than any other people. Wonder Woman is sent here to change us (Marston inverting American colonialism), not so we can change her. The Amazons were never subject to the male gaze (in a meta way they were, but in-story…), and so they have no concern for modesty or hiding their beauty. It makes almost no sense for Wonder Woman to worry about her outfit or changing it constantly to appease a country that she considers backward in many ways to how it treats half of it’s populace.

“Does Wonder Woman’s skimpy costume degrade women?” I can’t say for certain, however a segment of women here and abroad are fighting for the right for women to walk around (NSFW) completely topless (despite it being perfectly legal in some states, it’s not treated as such) and desexualise the female breast. To them, wearing less clothing is more empowering than wearing more.

Women like Emily Ratajkowski argue that women shouldn’t feel ashamed of their bodies and that being both sexy and feminist are both possible. Such are Sex-Positive Feminists, who believe that women cannot be truly free unless they can express their sexuality freely without consequence. Respect and dignity for women is a concern, but with the belief that women shouldn’t have to dress like men or be as conservative.This school of thought is naturally considered radical, and many women find the traditional methods of advancement more effective.

Women like Stephanie Murphy, the first Vietnamese-American woman to be elected into Congress. Ms.Murphy’s story parallels Diana’s; she comes from another country whose parents fled from a Communist government while the Amazons fled from the cruelty of Man’s World, neither she nor Diana have previous experience in political affairs, but both of them fight for the betterment of women everywhere.

Feminism, like Wonder Woman herself, can sometimes be contradictory. Judging Wonder Woman on her appearance feels decidedly unfeminist. Her wearing a metallic, Greek battledress shouldn’t keep her from fighting injustice. It doesn’t seem paradoxical for Diana to support female leaders and sexual liberation in the same breath, she wants equal rights for all women.

Wonder Woman’s costume is closer to it’s 1941 origins than it’s been in decades. Yet, women have more rights/freedoms/liberties now than they did at her inception. Her costume always returns to something close to her iconic look, no matter how many “updates” she gets and she remains one of the most important female superheroes ever.

The next time someone suggests changing it, perhaps its worth asking in response what they’re saying simultaneously about women.