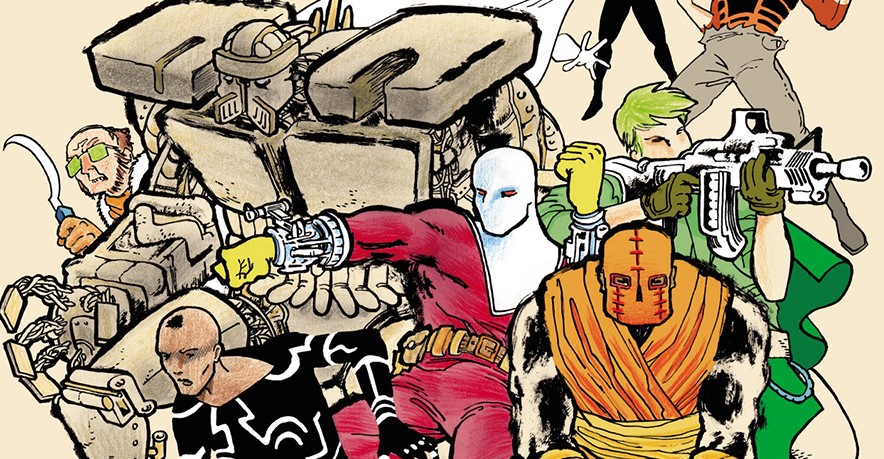 Technically I wouldn’t call issue #18 the best of this years Copra issues because 13, 14 & 17 are borderline perfect but it get’s pretty close to those issue as we focus on the sorcerer’s apprentice Xenia. A little background; Xenia was a student of a Dr Strange analogue named Vincent who was called into help the Copra team in early issues of the series. Vincent has been lost in another dimension while Xenia swallowed alien technology while on mission and it’s starting to make her crazy. What’s been so cool about 2014 Copra is the way that Fiffe has been able to play with his style in different ways; issue #13 is a straight action romp, issue #14 is low key, measured and brutally violent, issue #15 was the bright and colorful Miami issue, issue #16 was the Jack Kirby issue, issue #17 was the Steve Ditko issue and issue #18 is the magic/insanity issue. It’s split in half with one part showing Xenia’s perspective as her comprehension of reality slips in and out of lucidity while the other half is just a straight up inter-dimensional magic battle until it isn’t. The beginning portion is a masterful broken stream of conscious inside Xenia’s head that try’s to follow her non linear thought process while the panels and thought boxes play with the readers perception by having them shift and splinter. The use of thought boxes is particularly brilliant in how it manages to snake around the reader while leading towards a million different fractured directions and reading like the thoughts of a crazy person but perhaps more importantly reading like a very relatable crazy person. This is about the thin line between sanity and insanity as her thoughts are almost coherent but are just missing a connection like software in it’s beta version with bugs in its coding. But about halfway in Xenia enters the dimension she left Vincent in and all the sudden everything makes sense inside the void.  The pages are bright red as Xenia tries to take Vincent back home and he turns on her before realizing his student is more powerful then he will ever be. There is a chilling line about your idols failing you before Xenia is about to strike with a death blow and then within an instance we are pulled back into reality by Sonia, Copra’s surrogate mother figure and leader.

Did it actually happen? Was the trip simply a delusion? Are Xenia’s god like powers real or is it all in her head?  What does the alien technology do to her? Where do we draw the line between reality and perception? How did these one shot Copra issues end up being better then the already fantastic opening run? How much of these new styles will Fiffe incorporate when the book get’s the team back together next year? How much better can this get?