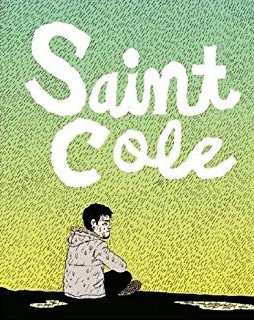 Stop me if you heard this one before: “the middle clash is shrinking”. It’s pretty easy to understand what that means in the abstract, the population that is “middle class” is lessening in numbers as the income gap widens. But what does that mean on a micro level? What does that look like? Why? Pardon me for opening with the type of sentence that I was trained to write in my undergraduate education but the big takeaway I get out of Noah Van Sciver’s Saint Cole is just that; it’s a highly personal three day look inside the decaying reality of millennium economics. The plot centers on a young man named Joe who is struggling with a new born baby that he works seven days a week at a pizzeria to barely support along with the child’s mother and a series of questionable decisions that snowball into total disaster. Van Sciver has been a master at creating relatable and sympathetic dirt bags through out his comics work and Joe is probably one of the most challenging he’s created as there all a couple parts where he does some genuinely uncomfortable actions but the creators sharp narrative structure makes it work by using a plot that shows it as a partial byproduct of the very real day to day stresses of poverty. Anybody that’s ever lived that life knows that a big part of being poor is constantly having life altering traps thrown in front of you and Saint Cole is about Joe walking into everyone one of those. in a short three day period It’s commentary on how sex, drugs & alcohol effect and play into all that is perhaps the books most insightful moments as it shows both the necessity in the relief they provide and the negative byproduct they end up leaving in their wake. And that’s more or less the point at large in Saint Cole is that everything about this life is unsustainable but it’s the life that many people have no choice but living for better or worst. Art wise Saint Cole is all strong character work as the core of it’s story centers on a growing fear and anxiety following Joe on his descent that comes alive in his short lived moments of excitement during periods of intoxication, intercourse or panic. Saint Cole is a continuation of Van Sciver’s excellent workman like exploration of life and it’s many challenges but it also sticks out from the creators past work for just how bold, honest and fearless it is in telling it’s story. You hear all the time how comics are great because “they have no budget” compared to film and television and while that’s true it should mean more then people are letting on. It’s often said in reference to things like The Dying & The Dead but it’s as applicable to something like Saint Cole which isn’t about anything otherworldly but instead quite the opposite, it’s something that is so of this world and so mundane that we take it for granted. The reality of living in poverty and what that means is criminally underexplored and in the day and age when “intellectual property” & “franchise” is a prerequisite for the creation of pop culture media in film and television comics needs to be the place where we get these voices and stories simply because they need to be told in a way that’s honest and there may not be any place else for that. Saint Cole is another excellent comic from Noah Van Sciver but what truly set’s it apart is how it unflinchingly tells it’s story in a way that is raw and without discretion. It’s about a reality that we want to ignore but can’t; most comics are the world that the creator see in their head but Saint Cole is the world that Van Sciver can’t ignore and he presents it in all of it’s raw and ugly elegance.