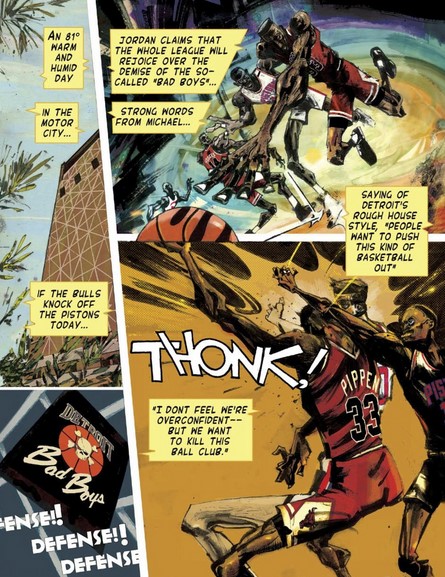 Anybody reading this in my age group probably has a similar experience to mine in regards to the obliquity of Michael Jordon. From as far back as I remember Jordan was everywhere and inescapable. Not enough that he completely dominated his sport but also that he basically cast his shadow across all of pop culture in some way or another. There was the many musical crossovers and tributes to the man, the oh so many product endorsements, the movies both real and imagined and the shoes; those gloriously over priced, sleek and beautiful sneakers that will surely outlast the man himself. To understand Jordan’s significance to the world of sports is to acknowledge that it’s basically accepted by all generation that he was the greatest basketball player ever without question or debate and his individual dominance of that sport is without precedence. To look at Jordan’s impact on a large scale is almost unquantifiable because for my generation he is the nuclease of all things cool. But that’s Jordan the legend; Jordan the man is something entirely different that’s shrouded in secrecy and ambiguity. What’s brilliant about Wilfred Santiago’s Michael Jordon: Bulls On Parade is how it works to reconcile the two sides of the person the public believed he was and the person he might actually be. It’s an empathetic and exciting whirlwind of a story that spans across decades of tragedy and triumph to come out the other side with a portrait that could only end with a certain level of complex ambiguity. Bulls isn’t a full on autobiographical comic but instead an intense dream like journey that contrasts the big moments in Jordan’s career with the big moments happening in America. There’s Jordan’s first championship, Magic Johnson’s HIV diagnosis, the LA riots, his father’s brutal murder, retirement, minor league baseball, the return to the NBA, the flu game, the final shot on Byron Rusell and then all these small details of a life in between. Santiago humanizes Jordan in a few ways and they are all pretty brilliant in their own right. The first and most simple is to give him a voice in his most personal moments, I don’t know how much of this actual history and how much of it is conjecture on the authors part but in any case the quiet moments have the biggest impact on how Jordan is perceived in the text. It’s moments like when he’s a young boy singing in a bath tub, a young man sitting in the driver seat of his Ferrari floored at the news of his friends HIV Diagnosis, a young couple on a birth day date, Jordan exclaiming “Looters gonna loot” in exasperation, bugging out with his dad to spend the night in Atlantic City ect all of it works to show Jordan for what he is underneath, which is just a regular ass dude that’s incredibly driven. The second is to contrast this portrait of Jordan with the perception of him in the media and that disconnect. It’s become popular for sports writers to basically worship at the feet of Jordan the player and hold him as a bench mark of which all other NBA players should aspire towards. Part of the major disconnect between Lebron James undeniably superior talent and the absurd amount of criticism he receives basically comes down to him or his game not being like Michael Jordan. But that wasn’t always the case and Bulls does great work in reminding people how much shit Jordan took, and really how much shit black celebrities in general have to take, during his time in spotlight. The way Santiago highlights what was often coded racism is an excellent criticism of sports coverage that we sadly still haven’t moved on from. The third way that Bulls humanizes Jordan is in how it operates in a sort of high paced blur of the protagonist life reflecting the perspective as it had to feel to Jordan as he lived through this one of a kind unreal experience of being the most famous person on the planet for being unequivocally the best at what he does. Every thing is done is these borderline surreal flashes that gives a certain level of empathy for Jordan’s perspective. The art is key in the way it presents this idea as it beautifully renders the narrative with it’s lush and flowing style of visual storytelling intersected with vibrant color work. It does great work to push across idea’s and insights that are spot on as the work veers into fantasy within the context of Jordan playing professional basketball. There’s particular points where you see Bill Lambeer portrayed as a monster in Hanibal Lector style confinement until he’s let out on the court or Pat Riley’s Knicks as these hulking oversized goons that are just brilliant plays on the persona’s of the actors in addition to the fluid nature of reality that almost anyone can relate to whose played the sport of basketball extensively, it’s the kinetic and frantic pace that can make it feel like nothing else in the moment (basically not how my favorite team currently plays it). I know from personal experience that participating in the game has played a significant role at key points in my life and when it’s the crux of your existence while playing with literal super humans there has to be a level of transcendence from the elemental world that is indescribable. For all the Santiago’s fantastic art moments in Bulls it’s those parts that stand out, the glitch in reality that could really only be described with art as there isn’t words in practical language that can explain it. I’ve wrote before that NBA players are like real life superhuman’s and by that logic Michael Jordan is Superman, the alpha and omega. So how else would you tell his story but with a comic book?