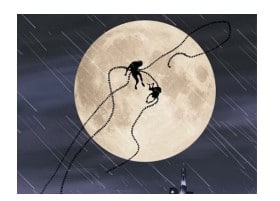 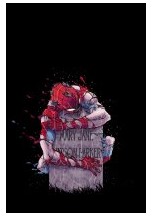 Next month, Marvel will be launching a new Iron Fist ongoing series by writer/artist Kaare Andrews. At first Andrews’ name did not ring any bells; however, as soon as I glanced over his credits, I noticed Spider-Man: Reign. Reign is a four-issue Marvel Knights mini-series from the mid-00’s. I have heard high praise for the story, yet had never actually read it, despite having a copy in my apartment for several years now. For whatever reason, it had become one of those books I could never quite motivate myself to start. Well, the announcement that Andrews was taking charge of Iron Fist was finally the proper impetus to crack open my collection. What I found inside was definitely worth the hype.

Reign is set in a near-future New York City. The actual year is not given within the story, though Marvel’s synopsis claims it to be “more than 30 years in the future.” At this time, crime has fallen off to near non-existence. Masked individuals of any kind, hero or villain, are strictly prohibited. In the place of the costumed crime fighters, New York is patrolled by The Reign, who bear more resemblance to SWAT teams than beat cops. They do not think twice before tasering a kid for graffiti, or beating an elderly man who they catch smirking at them. In case anyone might grow concerned about this type of behavior, the news media continually reminds the city’s residents how safer they are under the watchful eye of Mayor Waters. Waters’ newest project is the Webb, an electronic grid which will seal off the city. Harmful elements will be unable to enter, though citizens will be equally unable to exit. A small sacrifice, the mayor would argue, for the price of security. 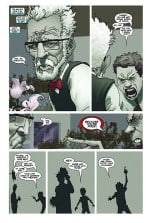 The story centers on Peter Parker, long retired from being Spider-Man. The reader first sees him failing to hold down an entry-level position at a florist. Newly unemployed, he returns home to his apartment, which is haunted by his memories of Mary Jane. Andrews slowly teases out what exactly happened to MJ, though it is clear from the beginning that Peter holds himself, or more importantly, his being Spider-Man accountable. For so many years, his mantra was “with great power, comes great responsibility,” yet at the moment the most important person in his life needed him, he failed her. Just like he failed Uncle Ben back at the beginning of it all. And so he has grown dejected, no longer believing in such lofty aspirations. He spends his time shuffling meekly through whatever life is left to him.

The set-up of Reign is reminiscent of The Dark Knight Returns, Frank Miller’s iconic tale of an aged Bruce Wayne coming out of retirement. However, where Miller was preoccupied by pressing social issues of the 1980s (nuclear warheads, rampaging urban crime), Andrews has refashioned the narrative not only for a different type of hero, but a different time in history. Published not long after the 5th anniversary of September 11th, Andrews’ New York is one where crime has declined to non-existence. Instead of feeling threatened by muggers or rapists within their neighborhoods, citizens fear terrorists infiltrating from the outside. Hence Mayor Waters’ promises that his Webb (a virtual wall if you will) shall keep the undesirables off their streets. And if some of the democratic process is tossed aside, well, then, the greater good is worth it. The fact that Waters is ultimately revealed to be a patsy for an even more malicious force does not nullify the social critique. Up until the end, Waters believes his own rhetoric; more importantly, the vast majority of New Yorkers freely accept it.

What makes this story click so well is the fact that Andrews never grows heavy handed with his commentary. It is recognizable enough, especially for those of us who lived through those years in New York, yet never so explicit that it is distracting. At the heart of this series is Peter’s journey of rediscovering what it means to be Spider-Man. This is the story of man who was lost, but finds his inner strength once again, which in many ways is the classic Peter Parker plotline. Time and time again, Peter has grown disillusioned, threatened, or even going so far as to quit being Spider-Man. Each time, however, he resumes the mantle. He has no choice in the matter. As long as his abilities remain, so do his obligations.

In this vein, Andrews has crafted a compelling Spider-Man tale. Drawing on Peter’s rich supporting cast helps as well. Jonah plays a large role as the voice of reason trying to rally New Yorkers to the barricades. He may no longer have his newspaper, but he has lost none of his impassioned commitment to the common good. It is a reminder that while Jonah may not always be on the right side of an issue, his concern for the city he loves remains the same. Doctor Octopus and Sandman each have small, though pivotal, roles, which offer insight into their personalities. Otto’s claim of kinship with Peter is particularly intriguing, given what Dan Slott has been doing with him lately.

Finally, I should mention that Andrews demonstrates as much talent as an artist as he does as a writer. He has a loose style, which fits well with a tale of dark days. Plus, what it lacks in detail definition, it more than makes up for in evocative atmosphere. There are many beautiful images in this collection. Based on the preview pages released so far for Iron Fist, there is little reason to suspect that the art for that series will be any less dynamic. Does every aspect of Reign work equally? Not really. There are a couple details that could have been tighter. However, the overall whole remains impressive. Before I was curious what Andrews has in store for Iron Fist; now, I shall almost certainly be picking up the new series to find out.