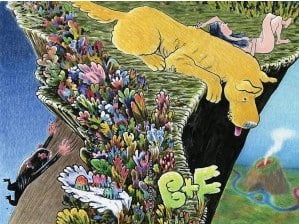 Drawing From Below: B+F by Gregory Benton

B+F is an imaginative and emotional comic that explores love, nature and the inevitability of loss inside a world around us that is both indifferent and constant. Created, written and drawn by Gregory Benton it excels in both world building and eliciting strong feeling from an emotional core with the closest thing to a written dialogue being a long sad guttural howl. It’s gone on to win the prestigious MoCCA award of excellence while building buzz at the Comic Arts Brooklyn Festival last fall before being mass published by Ad House Books in a stunning over sized hard cover. That’s because B+F is a universal story and despite it being published for a niche audience it’s a book that almost anybody can appreciate

Gregory Benton had been doing professional illustrations since 1993 working with everyone from DC Comics to Nickelodeon to Fortune magazine along with a slew of small press and alternative comics including an original graphic novel titled Hummingbird with Slave Labor Graphics in 1996. In 2011 a large scale storm flooded his art studio destroying years worth of unreleased work instantaneously. What survived was an image he made in a sketchbook of a naked women and big yellow dog that would end up being the spark that inspired B+F. After using the characters for a short story in a Spanish comics anthology Benton decided to wrestle with the idea of man versus nature in his own life by creating a stream of conscious narrative with no story planning before hand other then to include his original sketch. From there he let his art and emotions take him on a an epic journey like nothing else in modern comics.
B+F is a story of a naked woman and her giant yellow dog living together in a utopian jungle like paradise exploring their surroundings and living what 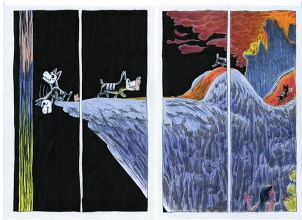 appears to be an idyllic existence. Another dog takes something from the female human (B) leading her and the large yellow dog (F) on an adventure of a lifetime. It becomes apparent early on that this is an improvised narrative as the art is dictating the story but that dictation is also what makes it work so well. Benton is not a “writer” in the traditional sense but after close to two decades in the medium he is a master at telling a story visually. The scenery is vibrant and detailed with lush colors of vegetation, mountains, a volcano and so much more while the world building is a feat in and of itself in the way that living things inside the story appear organically from the forward momentum of the narrative against the setting it’s placed in. With all that said at it’s core B+F is a story about friendship, love and loss where in two pages out of twenty Benton manages to hit those notes stronger then most ongoing series do in an entire year of publishing all without any written conversations. It’s Benton using his best skills to communicate with art what we all feel at about the people we care about versus the indifference of the world around us ultimately showing how fragile love is while giving example to how to use tragedy as a positive. He’s not just a writer or an artist. He is a visual story teller in of the highest level and B+F is an achievement in using art in the purest sense of the word to take the reader on a journey of wonder and reflection. Natural disaster could have ruined Gregory Benton but instead it caused him to look inward. Out of that came a beautiful masterpiece.
Tags:Gregory Benton
Share on FacebookShare on Twitter
EvelynRodriguezMarch 21, 2014