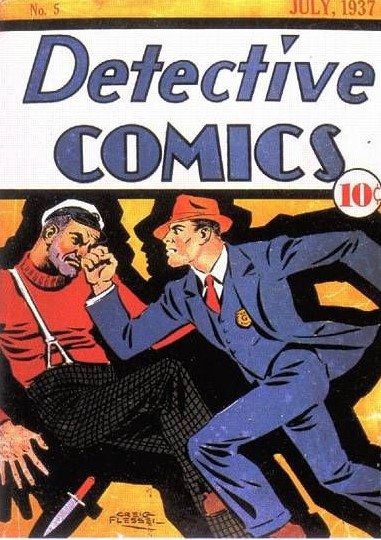 Before Batman: What the First Twenty-six Covers of Detective Comics Reveal About the Early Days of Comic Books

“Vin Sullivan conceived Detective Comics not as a brochure for newspaper syndicates but as a comic book equivalent to pulps, with self-contained stories in a single genre.”  – Gerard Jones, Men of Tomorrow:  Geeks, Gangsters and the Birth of the Comic Book

First published in 1937, Detective Comics was the foundation of one of today’s largest and most influential comics companies. Comics pioneer and businessman Major Malcolm Wheeler-Nicholson was broke, and needed money to publish his new detective anthology comic book; he entered into a business partnership with pulp magazine publisher and distributor Harry Donenfeld and Donenfeld’s accountant, Jack Liebowitz, and the corporation Detective Comics, Inc. (which eventually evolved into the present-day DC Comics) was born.  Without Detective Comics, there would be no DC Comics.

In 1939, Batman made his debut in Detective Comics #27. The character was created in response to Detective Comics, Inc.’s desire to feature more superhero characters after the huge commercial success of the first comic book superhero, Superman, who appeared a year earlier in Action Comics #1.  Batman would eventually take over the Detective Comics series and become one of the world’s most iconic and popular superheroes.

Racism: Three of the covers (issues 1, 8, and 18) portray Asian characters in an unflattering manner. (Issue #8 features Mister Chang, an Asian detective protagonist no doubt influenced by fictional Chinese detective Charlie Chan, but without context, his cover appearance seems somewhat sinister). “Yellow Peril” Asian villains were unfortunately a common trope of popular entertainment in the 1930s, particularly in pulp magazines and comic strips, and the first issues of Detective Comics feature the villainous Ching Lung, while issue #18 features the most archetypal of pulp Asian menaces, Fu Manchu.

In his book Men of Tomorrow:  Geeks, Gangsters and the Birth of the Comic Book, comics historian Gerard Jones confirms the presence of “Yellow Peril” racism in early issues of Detective Comics; writing about a Slam Bradley strip that was written by Superman creators Jerry Siegel and Joe Shuster and published in Detective Comics #1, Jones notes that the Slam Bradley character, influenced by Milton Caniff’s Terry and the Pirates comic strip, is fighting a “horde of evil Chinese” led by the villainous Fui Onyui.

Cops and Robbers: Not surprisingly for a detective anthology comic book, there are a lot of cops, private detectives, and crooks on the covers. Most of the early covers are done by artist Creig Flessel, with Leo O’Mealia, Jim Chambers, and Fred Guardineer also providing covers (the first issue’s cover was done by Detective Comics editor Vincent Sullivan).  Below is a sampling of some of the covers; by modern standards these covers just seem flat and uninteresting, which leads to another point…

Underwhelming Covers: Imagine that you are alive in America in 1937; you are at your local newsstand and have ten cents in your pocket. You look at the pulps and comic books before you and see the first issue of Detective Comics, and the current issue of The Shadow Magazine. Going by the covers alone, which one would entice you to part with your dime?

The first issue of Detective Comics has a bright cover featuring a crudely-drawn Asian villain and The Shadow Magazine has a lush, action-oriented painted cover by George Rozen, featuring The Shadow, an established, popular character in both pulp magazines and on radio dramas. The covers for Detective Comics aren’t just flat and uninteresting by today’s standards, they were also meager competition to the exciting pulp covers of the period.

A Masked Hero Appears!: Issue #22 – at last, a costumed hero on the cover. But no, it’s not Batman. Not yet. It’s The Crimson Avenger.  The Crimson Avenger character was created by artist Jim Chambers and first appeared in Detective Comics #20, and made the cover two issues later. The character has no iconic letter “C” on his costume, just a domino mask, a crimson cape, and a hat. The Crimson Avenger has more in common with radio vigilante character The Green Hornet (who undoubtedly inspired The Crimson Avenger) and the pulp hero The Shadow than he does with the brightly costumed superheroes that would soon dominate comic books.

Collectively, the covers for the first twenty-six issues of Detective Comics convey a comic book medium that is still struggling to compete with the pulps, copying the pulp conventions of Asian villains, masked vigilantes, and private detectives in crude four-color art. It’s clear that these early comics are competing with the pulp magazines, and losing.

Although the sales figures for early comic books might have been strong enough to interest a pulp magazine publisher and distributor like Harry Donenfeld in publishing comic books, the sales figures were not that impressive compared to the sales numbers for pulp magazines.  Indeed, Jones notes that Donenfeld’s interest in publishing Detective Comics was motivated by a desire to sell other types of publications through Donenfeld’s magazine distribution company, Independent News:

There wasn’t big money in comics yet, but they brought something valuable to Independent News.  Being a girlie mag distributor put a lot of dealers off, but if a sales rep could go into a grocery store in Toledo or Lubbock or Butte and say, “Look at these funnies – they’re great for the kids,” he’d be listened to.  Then he could say, “If you like those, why don’t you take a flyer on a Super Detective or maybe a few Spicy Detectives for the men?”

THAT’S RIGHT; DC COMICS – PUBLISHER OF SUPERMAN, BATMAN, WONDER WOMAN, AND OTHER NOTABLE SUPERHERO COMICS – BEGAN AS A SCHEME BY ITS FOUNDERS TO SELL SOFTCORE PORNOGRAPHY MAGAZINES IN GROCERY STORES.

And then Batman swings into action on the cover of Detective Comics #27.  Batman (along with Superman, and the other superhero characters inspired by Superman) gave comic books something unique – a genre of secret identities and iconic costumes that was not present in the pulps.  Granted, the pulps had heroes like The Shadow and Doc Savage (and it should be noted that these characters were influential in the creation of superheroes like Superman and Batman), but comic books like Action Comics and Detective Comics showcased heroes in colorful, symbolic costumes, fighting evil in four-color glory.

After Batman’s debut and success, Detective Comics would eventually cease publication of imitation pulp detective adventure strips.  Detective Comics became a comic book about the detective superhero, Batman, and it – along with other comic books that featured superheroes – would outlast its pulp fiction competitors.

SOURCES AND FURTHER READING: Gerard Jones’ Men of Tomorrow:  Geeks, Gangsters and the Birth of the Comic Book provides a rich history of the early days of comic books, including the creation of Detective Comics.

You can see the all of the early Detective Comics covers at coverbrowser.com (the site also has lots of cool pulp covers, as does the site pulpcovers.com.)

The images above are the property of their respective owners, and are presented for educational purposes only under the fair use doctrine of the copyright laws of the United States of America.