Throughout this month you are going to read a lot of different takes on Batman.   You will read how he has evolved over the years and what stories stuck with the staff here at NBC!  You will read a lot about “my Batman” and “what Batman means to me”.  The 1989 film Batman holds a soft spot in my heart but this is by no means “my Batman”. The caped crusader that dawned the big screen in the summer of 1989 was Burton’s Batman. More on Burton’s Batman later, first I want to discuss how incredible the success of this movie was.  1989 was a huge year for movies. The year contained huge hits like The Little Mermaid, When Harry Met Sally, Driving Miss Daisy, Dead Poets Society, Field of Dreams, The Abyss and Honey I Shrunk the Kids.  As well there were a few huge sequels coming out that year like Indiana Jones and the Last Crusade, Back to the Future 2, Lethal Weapon 2, Ghostbusters 2 and Star Trek 5.  This is a monstrous list of blockbuster hits. I wish I was a movie goer back in the summer of ’89, but I was only 3 years old at the time and couldn’t even say Gotham City. With all those terrific movies coming out in 1989 what movie do you think topped the box office charts?  The comic book film directed by a fairly new face and starring the husband from Mr. Mom.  It is amazing and a little unbelievable that this movie was such a huge hit.  Although this movie is drastically flawed in a few major areas I would have to say that it deserves to top that list of 1989 films. It is worth the admission just to see Burton’s vision of a comic book come to life.  If Burton’s vision is not enough for you then the ticket is definitely worth seeing Jack Nicholson lose his mind.

Burton was a fairly new face at this time.  He had only directed two major motion pictures being Pee-wee’s Big Adventure and Beetlejuice.  Burton had already accumulated fans with these two films but I’m sure there were some serious doubters when this announcement was made.  If that wasn’t enough, then comes the announcement that Micheal Keaton would play Bruce Wayne.  At this time Micheal Keaton was a comedy actor. There was not much demand for a comedic Batman.  If you remember, ( I don’t, I was still in the womb) The Dark Knight Returns had just come out and the comic fans were begging for a “dark” Batman.  The last things fans wanted was Bruce Wayne to be played by a comedian.  This pissed more than a few fans off. Much like Ben Affleck now, there was a petition signed to remove Micheal Keaton as Batman.  Even Bob Kane was questioning the decision. It seems as though these angered fans did not speak with their money as Batman was still the highest grossing movie of 1989.

Alright time to get into the movie.  I just watched this movie yesterday for the review and my memory of the movie is very fond.  I remember being a little confused on the plot but I chalked it up to inexperience. Well, I know now that the confusion was not due to inexperience but do to a plot filled with holes and scenes seemly in place just to allow Jack Nicholson to riff as the Joker. This film gives us a very calm Batman. However right from the beginning there is definitely something wrong with this Batman. He does not seem to ever take action.  He sits back and watches crimes happen and is satisfied just to kick some ass and strike some fear in criminals.  That is not my Batman. My Batman takes all actions to prevent crime, he does all the necessary research to be prepared for every moment.  Burton’s Batman was a very reaction based Batman. Micheal Keaton did a fine job of playing this quiet Batman who thrives off punching a few faces in the darkness.

If I was not totally sold on Batman it is a good thing he is not the star of this movie.  Sure his name is on the title of the movie, but I think that is a misprint.  The movie should be called “Joker” because he is the star of this film.  Joker is the only origin story we are given in this film, which I really enjoyed. Batman is supposed to be a mystery, a myth, so right away we aren’t given a back story.  We are not spoon fed some touchy feely moment where our hero was born. Instead we are left to figure out Batman as Gotham City figures him out.  What we are given is the beginning of Joker, which is a little backwards seeing as most of us believe that Joker has no definitive origin.  However it is clear that this movie is not canon and if you have trouble with stories that do not follow “your Batman” then I would steer clear of this film.  For me I appreciate this Batman for who he is and at the same time I am enjoying watching this Joker film.

Let’s face it. Jack Nicholson absolutely steals the show on this one.  He is certifiably nuts in this movie. I think it was around the point that he starts hooting to himself where I actually got a little concerned for him and myself.  It is rumored that Jack Nicholson is still to this day the highest payed actor for a single movie due to his work in Batman.  That is because of the disgusting amount of money they payed him along with a cut of the proceeds for Batman, Batman Returns and Batman Forever.  He got payed for movies he wasn’t even going to be in!  Burton must really of wanted Jack and it is a good thing he got him because this movie is all about Jack. Like I said earlier, many of these scenes feel like they are only there to let Jack work his magic as the joker. This joker is all fun and games.  He makes silly jokes and does very goofy things, however he has just enough homicidal maniac in him to keep his actions creepy and disturbing. He really conveys the horror of clowns.  Why are clowns so scary when all they are doing is having fun?  Am I scared of clowns because of the joker or scared of the joker because of clowns?

Tim Burton has said that he does not read Batman comics. He said that to prepare for the film he read The Killing Joke and this is very prevalent in the film.  The theme that I think Burton has grabbed from The Killing Joke and used in his film is the notion that Batman and the Joker are creations of each other and are equally insane. The other parallel I found from the Killing Joke and the film is the ambiguous scenes where you can see what you want to see.  There are many scenes in the film where you can take it however you chose to take it.  For example when Batman has Jack by the hand hanging off the catwalk.  Did he lose his grip or did he drop him? Both conclusions make sense for our homicidal Burton Batman. This is similar to the ending of The Killing Joke as Cosmo touched on.  Some believe that Batman kills the Joker in these final panels. I am with my fellow blogger on that one and believe it is a circular story that doesn’t end and will never end. 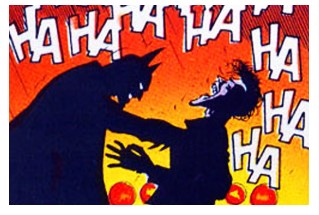 The film does a terrific job of spotlighting that Batman is just as insane as The Joker. He went through a really bad day, just like Jack and Jack is trying to convince him he is crazy as well.  What I love about these scenes in both the movie and the comics is that Joker sounds right, we start to believe him.  Everything he has to say makes sense at this point, Batman is just as insane, maybe he should just turn to crime.  However just at the moment when we are starting to doubt ourselves Batman gives us the reason why we do not need to lose hope. You see Batman is the same as the Joker, they both had bad days that changed them but Bruce was strong.  He turned his bad day into a fight against injustice, while Jack turned his bad day into an excuse to finally lose his marbles.  This film portrays this relationship very well.  Sure they go to a few extra Hollywood steps like the “I created you, you created me” thing with Jack shooting Bruce’s parents which may make you upset because it is not canon but I think works well for the film.

In conclusion I would just like to say that this movie may be flawed but you must take it for what it is, Tim Burton’s vision of Batman and that is enough to make this movie worthy of a chart topping 1989. I do love this movie and always will.  There are so many spectacular moments and visuals that this movie cannot be missed. You don’t have to love it but you do have to see it.