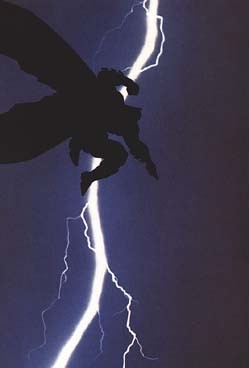 If you peaked to the best of your abilities would you know it? Would you realize it in hindsight? What would you do afterwards? I often think about this in regards to Frank Miller, a creator whose work I really admire from one point in his career and generally despise now both as an artists as well as in the general sense of being a human. But that doesn’t change the validity of his creations and with all that said when Miller was on he was able to work with a level of comic book alchemy that is still head and shoulders above anything else in the medium with his crowning achievement being The Dark Knight Returns; the greatest creation in the history of the comics. It takes all the things that only comics can do in a story and does them better, it redefines an entire superhero universe for the modern era, it satires it’s time but is still timeless and it lives in so many different genre’s and styles while still being truly it’s own singular voice that has not simply been imitated but more over became a staple of comic book creation. It doesn’t just transcend the medium or superhero’s so much as transcends artistic classification in and of itself. It’s trash fiction that is also a masterpiece, it’s the send off for the pre-crisis Batman that Miller would ultimately redefine and it’s a mirror on the inherent chaos and corruption of our  own world. In short it is the greatest comic ever created and if you are going to celebrate Batman The Dark Knight Returns is the greatest work of art in his story. 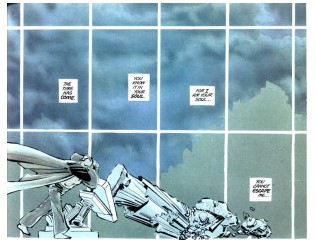 Now you probably read all of this and are asking “Have you ever read Watchmen?” Yes I have. You are probably now asking “What the fuck are you talking 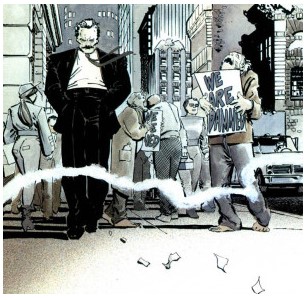 about? You don’t really think TDKR is better than Watchmen do you?” Yes I do although Watchmen is brilliant and I don’t begrudge anybody that does think it is the greatest comic of all time. I do think it has become accepted canonically as the greatest comic of all time and obviously I don’t agree with that. Why is Watchmen considered without question the greatest comic series of all time and why don’t I agree? Well to answer the first question I think there are two main reasons for Watchmen’s cultural status. One is because again Watchmen is unequivocally brilliant. It is probably the most well thought out and structured comic book series that achieves the rare task of affecting both the heart and the head equally in the most mind blowing way possible. It instantly created a sub-genre of superhero deconstruction while still managing to be significantly better than anything else that has ever been produced in said sub-genre. It is a comic that manages to honor the past while projecting towards the future of the medium. The other reason is because it translates towards non comic reading literary readers better than anything else. It isn’t about an established superhero which makes it easier to take seriously without having the baggage of more familiar characters and it speaks to both this sort radical ideology and themes of general alienation in ways that are similar to great post modern novels. And that in and of itself is fine. Moore has shown a clear reverence to classical literature over his career and in Watchmen he is at the height of his abilities. But as much as love The Watchmen I still love The Dark Knight Returns more and that’s because The Dark Knight Rises looks past all that. It isn’t a comic that pays reverence to literature of the past as much as it’s blazes and entirely new trail for the medium of comics by lighting tropes of the past on fire. It looks at 1980’s American culture and takes a blow torch to that as well. It’s only ideology is that ideology doesn’t exist. It acknowledges alienation and

then moves on right past it to something deeper. It is a deeply humanistic and brutally violent examination of how people are forced to live within the chaos of humanities own creation. It’s lack of clear moral stance is more complicated in a good way. Nobody in this comic is easy to like but that’s also turned on the reader. Everybody is legitimately flawed from Batman on down but they are also trying their best in spite of those flaws. Jim Gordon is casually sexist while being willing to sacrifice his life at the drop of a hat for his spouse. Superman has let himself become a tool of the military industrial complex but he also saves the world from nuclear holocaust. The mutants are a group of young nihilistic sociopaths but when Batman steps in to give them guidance they save a city from devolving into total anarchy. Most flawed of all is Batman himself who is old and overmatched at almost every turn but he never stops and always endures. His body is literally falling apart and in the end he still takes on Superman. As much as The Dark Knight Returns is a satire of the 1980’s it is more an examination of humanities goodness at it’s core against the inherent complexity of a personality that is formed around an unwavering and unchecked desire and points to human connection as either the bridge between that duality or the reason for it’s explosiveness, which in the end is what The Dark Knight Returns is really exploring.

When I first started writing this I thought that The Dark Knight Returns is about violence but that’s only part of it. The Dark Knight Returns is about human interaction and how that can lead to not only violence but also connection and in some cases progress. This isn’t to say that The Dark Knight Returns isn’t violent because it is extremely so. You can see Jack Kirby, Steve Ditko, Neal Adams and Jim Steranko’s DNA all over Frank Millers art in this series as he creates beautiful action spreads that moves at a 100 miles a minute and almost never let’s up and never flinch at the most disturbing details or real consequences of that violence. He uses art to create a constant tension within the urban gothic/cyber punk backdrop and that tension is the stories center. In it there are essentially two reactions to the tension: fight or work together. For most of that story it is fight but where there is any real progress is when the protagonist work together. Even the final conflict with Superman is more an illusion of violence by Batman and Carrie as a mean to fool the world and evolve his fight against crime.  That ending is nearly perfect in that it shows a way for Batman to evolve that seems to have been lost on future creators. There are was still tons of unused caves for Bruce Wayne to explore. It wasn’t a death. It was new a beginning. It was Frank Miller telling you that nothing ever ends without spelling it out. It was showing that you can truly evolve by working with others. It showed that there was always more adventures. It showed that Batman would never truly die as long as we are willing to follow him into the unknown. But at his core it showed that even though loneliness and fear is all around us, salvation is within each other; that the future was with us united.