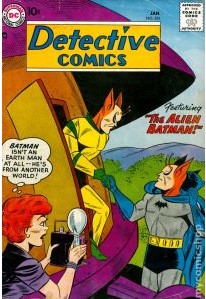 When, at the end of the 60s, Dennis O’Neil and Neal Adams were first assigned to Batman, it had been a roller coaster of a decade for the character. In fact, legend has it that in 1964 circulation was so poor, DC was giving serious consideration to simply axing Batman. Truthfully, the last several years had not been one of the strongest periods for The Dark Knight. Ten years earlier, Dr. Fredric Wertham in his book Seduction of the Innocent had raised questions about the effects of comic books on young readers. As tends to happen, many “concerned individuals” jumped to conclusions, laying at the feet of the comics industry responsibility for all that ailed contemporary youth. Using the same reasoning which later generations would apply to such cultural phenomena as rock music, rap music and video games (apparently bad parenting is rarely an option), moral outrage spread. Soon there was a Congressional committee investigating such pressing political matters as how much gore was acceptable on a Tales from the Crypt cover or whether Batman and Robin were homosexual “recruitment” devices. The most infamous causality of this hysteria was EC Comics, but, Batman was affected as well.

Just as two decades earlier, Hollywood had accepted the self-censorship of the Hays Code over direct government interference, comic book publishers submitted themselves to a new code of conduct. The Comics Code of Authority was meant to make comics safe and clean for all readers. Thus, all the darker aspects of Batman which had been around since the earliest issues of Detective Comics were swept away. Batman was separated from his street-level roots and placed into increasingly outlandish adventures. A cursory glance over a run of Detective Comics covers from the late 50s reveals aliens, robots, monsters and odd man/animal hybrid characters. Oh, and the introduction of Bat-Mite. The closest any of these covers comes to depicting a more naturalistic criminal element, also shows Ace, the Bathound leaping into action. In other words, formerly darkened Gotham was fully bleached out in camp.

Yet, as I discussed last week in my examination of the earliest Batman stories, fantastic elements were always part of The Caped Crusader’s world. From the beginning, he fought threats such as vampires and Monster Men. It should also be remembered that this was a period when science-fiction played a huge part in popular culture. This is the same decade which brought us The Day the Earth Stood Still, Them!, The Beast from 20,000 Fathoms, Earth Vs The Flying Saucers and Attack of the Body Snatchers. Across the Pacific, Toho released the first Godzilla film. As the decade drew to a close, Rod Serling launched The Twilight Zone, while Ed Wood labored away at Plan 9 from Outer Space. Thus, in an era of decreased interest in superheroes throughout the industry, DC editorial was simply giving fans what they wanted. That it worked for as long as it did was testimony once again to Batman adaptability.

Eventually, though, sales dipped. Instead of killing off Batman, however, they gave him a new editor: Julius Schwartz. Under his guidance, a “New Look” Batman debuted in Detective Comics #327. This being comic books, the New Look referred to a costume redesign; yes, it is at this moment where the yellow oval is added to Batman’s outfit. However, something much more significant was also at work. Schwartz had all of the most outrageous Bat-tropes swept away. Gone were Bat-Mite, Ace and all those assorted aliens and weird happenings. Things were running smoothly, until 1966 when popular culture tossed a mighty obstacle in Schwartz’s path: Batman on television. Camp was back with a vengeance.

Until, of course, it wore out its welcome. By the third season ratings were falling and the show was canceled. With sales of the comics leveled off as well, Schwartz could once again purge his Bat-titles of their various excesses. There were multiple creators working on the various Batman series of this period, but today I would like to focus on the pair whose names have become synonymous with the revitalization of The Dark Knight: writer Dennis O’Neil and artist Neal Adams. 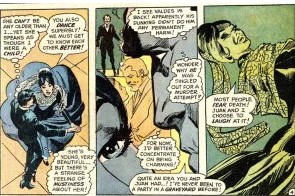 Together O’Neil and Adams produced a dozen Batman stories published over a four-year period. In these stories, O’Neil often emphasizes the World’s Greatest Detective aspect of Batman. These are crimes which often challenge Batman’s wits as much, or in some cases, more than his brawn. In addition, O’Neil lends an international man of mystery flavor to his Batman adventures. These are stories which travel the globe from Mexico to Spain to Calcutta to Switzerland. Yet, even when not in Gotham, these stories maintain a greater naturalism. This is not to say that the supernatural is entirely absent; indeed, at times, it plays a prominent role in the story. The first O’Neil/Adams collaboration “The Secret of the Waiting Graves” from Detective Comics #395 revolves around a couple who cultivate a flower which grants immortality while also taking away sanity. In some ways, this intriguing premise seems like a rough draft for O’Neil and Adams’ most popular creation, Ra’s al Ghul, whose own rejuvenation abilities would be linked to madness.

O’Neil is raising a question for his readers: at what price would extended life be worth it? Naturally, Batman turns down the offer, but would you? Here and in other stories, O’Neil broaches difficult issues, such as political corruption. In “Bruce Wayne Murder Case!” (Batman #245) Batman must prove an innocent man blameless of murder, even if it results in a corrupt politician being elected to office. In “Night of the Reaper” (Batman #237) his code of forbidding violence finds him trying to protect the life of a former Nazi officer, who is being stalked by both the comrades he betrayed as well as a former inmate of one of his concentration camps. In tales such as these, there is no sense of triumph at their conclusion; indeed O’Neil’s Batman has a self-pitying sarcastic streak which surprised me. He is a hero limited by the arbitrary twists and turns of fate. In such a way, O’Neil is teasing at deeper issues of social relevance which would come even further to the surface in his writing of Green Lantern/Green Arrow and The Question.

At the same time O’Neil has a sense of humor, which he and Adams display splendidly in “Reaper” when Batman must infiltrate a Halloween party:

As O’Neil was returning Batman to his darker, more detective orientated roots, Adams was refashioning The Caped Crusader visually. In his introduction to the second volume of Batman Illustrated by Neal Adams, Adams explains how 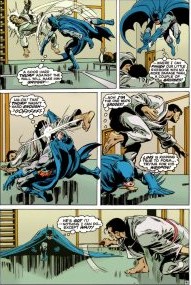 he approached the task of drawing the character. The mistake he had in made his earliest efforts was to draw Batman like any other hero. The problem is that Batman is distinctly unlike other heroes, in his lacking of superpowers. Yet, artists such as Curt Swan over in World’s Finest kept giving Batman and Superman nearly identical body types. This made no sense to Adams. Of course, Batman has well-defined body tone; just as important, though, is his agility. Adams’ Batman is sleek, not bulky. He moves with the natural grace of gymnast. Adams’ dynamic rendition of The Dark Knight was not only a sharp breaks with what came before, but also cast a long shadow on the artists who followed him.

One thing that’s striking about these stories is the near absence of the classic Bat-Villains. True, Ra’s and Talia put in repeat appearances, but they were fresh creations back then. That changes towards the end of the run when Harvey Dent shows his face(s?). For their final Batman collaboration, though, O’Neil and Adams revitalize a character which reportedly Schwartz despised: The Joker. 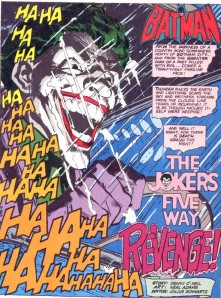 In the classic “The Joker’s Five Way Revenge” from Batman #251, O’Neil and Adams do for the arch-fiend what they did for the hero. They scrubbed away the camp, the silly clownish antics. The story opens with splash page of the Joker behind the wheel of a car, laughing manically. The page is full of “Ha’s” creating a claustrophobic feel. Already the Joker has us at ill ease, and for good reason. The scene shifts to a crime scene, a body bearing that trademark twisted grin. The Joker was betrayed by a member of his former gang and instead of worrying about who the guilty party is, he simply plans to kill all of them. As in his debut appearances, the Joker takes great glee in cold-blooded murder. Adams emphasizes this sinister aspect in the art. In one chilling panel, the Joker silently emerges from the shadows behind his soon-to-be victim. Later, when Batman tracks the Joker to an abandoned aquarium, the Joker’s disembodied head is reflected in a glass display case, floating at the center of a shark’s gapping teeth.

Adams’ art is especially strong in this issue, at times refusing to be contained by the panels. In addition, the issue contains one of his most iconic images of Batman, as he sprints along the beach to catch his foe. Both O’Neil and Adams bring their best to “The Joker’s Five-Way Revenge”, which serves as a fitting culmination for their Bat-Partnership. Their run is one of the most important in the history of the character, laying a groundwork which would prove quite fruitful for the creators who would follow in the decades to come. The Dark Knight still had some periods of bumpy sales and questionable costume designs ahead of him, but the essence of his “New Look” would endure.