Why I love The Metal Men

Recently, I finished volume 1 of the Archive Editions of The Metal Men. You know how much I enjoy the Silver Age, after all. I had limited experience with the Metal Men, mainly from 52 and the recent issues of Justice League by Geoff Johns. So I thought it was time to learn alittle more about these eclectic heroes.

Created in 1962 by Robert Kahniger, Ross Andru, and Mike Esposito (who doesn’t officially have a creator’s credit, but since he worked on the characters for so long from the very beginning I thought he earned it); the Metal Men appeared in Showcase like another Silver Age character, the Barry Allen Flash.  Unlike Flash, the Metal Men are said to be an overnight idea to fill a deadline. What could have been a boring and unmemorable chapter instead became an enduring title for DC.

Invented by Dr.Will Magnus, the Metal Men were living robots whose purpose was to safe lives in conditions too dangerous for humans. Instead of rebelling against this or protesting, they deciding that saving lives was noble enough to go along with it. Each one was made of a different metal and shared it’s properties: Gold could space himself across wide distances, Platinum (or Tina) could spin herself in fine threads without losing strength, Lead could shield others from radiation, Iron was really strong, Mercury was liquid at room temperature, and Tin was…Tin. Aside from Iron and Lead, the other Metal Men had distinct and interesting personalities. Mercury was often peevish and impatient, Gold was always noble and collected, Tina was constantly flirting with Dr.Magnus, and Tin always felt like he was lucky to be there as tin isn’t a very strong metal. Each one also carried a Responsometer in their bodies, the only explanation for how they functioned.

What is interesting about those early installments in Showcase was that they where part of a saga from the beginning. Not one that was planned to go for years, but each issue picked up from the last one like today’s comics (but with less padding). At the end of the first issue, Doc spends the early part of the next one wondering if he should rebuild the robots at all. He eventually does, but just repeats the process with new materials thinking the results will be the same. He learns that is not the case, and has to fix the broken remnants of their old bodies. This became a pretty recurring theme for the characters.

Something that was pretty noticeable was the misogyny in the comics. Granted it was the sixties, and you can see it in lots of books including Fantastic Four. In Metal Men, it was pretty on the sleeve. As I mentioned, Tina flirted with Doc (on just about every page) which would annoy him to no end. He would constantly tell her to act like a robot, causing her to cry which caused him to tell her to stop acting like a woman. When Tina was being emotional or inconvenient, it was attributed to her being Female. Often it was assumed Tina would endanger missions because she was Female. Doc himself seemed to go back and forth on the issue, seemingly to hid his attraction to a female robot.  Mercury would sometimes dismiss her value to the team, when she took Doc’s attention away from himself or the others. Of course, Mercury had trouble playing with the others anyway; 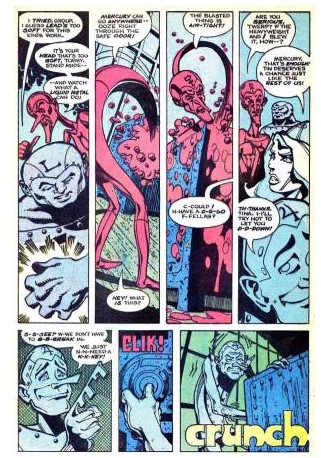 Aside from the misogyny; there were many positive aspects to the book such as the steady stream of scientific information (somewhat clunky, especially when it was repeated twice in one issue), and the interaction of the Metal Men to Doc and each other. One issue had Tin assume leadership of the team since Doc was unavailable, and ended up being successful (mostly, the team still got wreaked). Each issue dealt with a threat that was more than a deadly match for the Metal Men and would require sacrificing themselves to stop it.

What I really love about the Metal Men is how unique they are, even today. Most superhero origins follow a basic formula; “X was a regular person who one suffered a freak accident and since kept putting on a funny costume to save the world”. It works of course, but there are thousands of those cases.  Characters like Teenage Mutant Ninja Turtles, Hellboy, Martian Manhunter, and Superman to an extent have appeal because they’re not human. What the Metal Men have on them though, is the fact that they were made and will always be robots. However, they still have this innate desire to help others at the cost of their lives. No traumatic incident to reinforce basic morality, or freak accident necessary (aside from some radiation to make them alive). That is most DC characters of course, altruism and desire to use superpowers to be a hero. Lately, I just appreciate that more as heroes become more complex but not better heroes. Remarkably, the Metal haven’t changed much. Here’s hoping we see more of them.