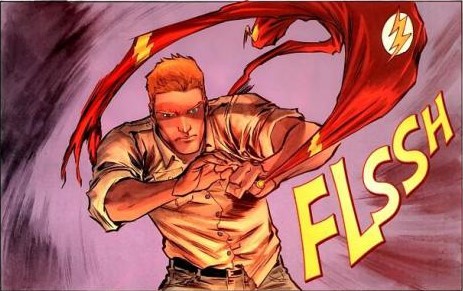 When DC Comics character Barry Allen wants to assume his superhero identity of The Flash, he presses a small stud on a hollow ring that conceals Allen’s compressed Flash costume; the costume is ejected from the ring and Allen then dons the costume at super-speed.   It’s a neat costume change gimmick that was inspired by an obscure 1920s pulp character created by the same author who created the iconic character Zorro.

Writer Robert Kanigher wrote the first Flash script for the comic Showcase #4 (October 1956).  Kanigher admitted that “the Flash’s ring was sheer plagiarism [based on the pulp character] the Crimson Clown… When he wanted to switch from his civvies, he pressed a spring on a ring on his finger.  The clown costume erupted out and expanded to life-size.  Many years later, I stole that gimmick”.

The Crimson Clown was created in 1926 by author Johnston McCulley; McCulley is noted for creating Zorro in 1919.   The Crimson Clown is Delton Prouse, a wealthy man who dons a crimson clown costume and steals from the rich to give to the poor (but keeps half the loot for himself).  The character’s adventures were published in several pulp detective magazines until 1931.

The images above are the property of their respective owner(s), and are presented for educational purposes only under the fair use doctrine of the copyright laws of the United States of America.