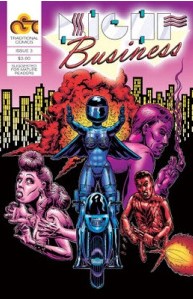 “Benjamin Marra is an artist who lives in the city. His obssesions include different colors, classical poetry, watching romantic sunsets and hot chicks”-from Night Business #1 about the author bio

Have you ever read a Mark Millar comic from his Icon period and wondered what it would be like if it didn’t suck? What would need to change? What elements would make them better? Well I have your answer and it is Benjamin Marra and his Traditional Comics imprint. Benjamin Marra is many things as I will list for you below but above all Benjamin Marra is a cartoonist that has created his own unique brand of bat shit crazy comics that walk the line on distasteful, vulgar and explicit in all the right ways. His work explores a certain aesthetic of late 80’s/early 90’s Sam Goody kitsch that is equal parts satire and action/adventure often times overdosing on both in equal measure. The typical through line of a Benjamin Marra comic is what if an 80’s action movie was like…. and with that he has accumulated an impressive body of work that is wholly original and like nothing else being created in comics.  There are comics that make you think, comics that make you gasp and comics that make you laugh your ass off and then there are Benjamin Marra comics that do all of those things dialed up to ten all the time. You see other comics that are afraid to touch the third rail of hot button issues like sex and race while Marra’s work takes a piss on that rail and then lights it on fire. This an article about someone who studied art in the birthplace of the Reniscance and went on to create a comic that concluded with a rap group killing the mayor of Los Angeles as he was jerking off to a porno of said rap group gang banging his wife. This is about Benjamin Marra.

“In addition to being a deep person, Benjamin Marra-the creator, writer and artist of Night Business-is also an expert on many subjects like art, science and hooters. Marra is also a music expert. ‘Music’ says Marra ‘is, like, one of the most pure things in life, you know? Music is, like emotion. It’s, like, pure life, You know what I mean?’” form Night Business #2 about the author bio

You can get a lot of insight into Marra by reading his interview with Matt Seneca at The Comics Journal where he describes a disconnect between what he thought he should do with his art and what he want’s to do. During his time at Syracuse his art proffesors dismiss comic’s, while studying art in Florence he has a sketchbook of dark stuff that he’s afraid to show anybody until one he day he shares it with his classmate who laughs and makes him feel ok about it, he originally studies in graduate school under legendary artist David Mazzuchelli at first attempting to do a series of paintings about genocide in Rhwanda before deciding to do a Jack

Kirby inspired comic book and after he has the initial career ambition to illustrate childrens books, in private he’s drawing dark, gory and sexually evocative material. At some point he’s poor and living in Philadelphia when he get’s the inspiration for his debut comic Night Business by watching trashy Italian genre films and from that point everything clicks. To understand Benjamin Marra is to accept his fundamental ideology that comics and art in general aren’t supposed to “good” in the classical sense but that good art and comics shouldn’t try to be good in that way but instead revels in it’s trashiness and ridiculousness.  In Night Business you see these idea’s forming in a comic about a couple guys that manage and protect a group of strippers in a grimey city that are being attacked by a leather clad slasher. It’s every urban cliché taken to the extreme with an art style that sharp and stiff but totally engaging and it’s chock full of stippers, drugs, violence and a woman in lingere on a motor cycle riding around the city taking revenge on sexual predators. It is super dopey but it’s also completely aware of that and it ends up being a fantastic comics series albeit one that is as of now incomplete and on hiatus. In other words it’s Frank Miller’s Sin City but actually really good instead of trying to be really good. From there Marra start’s pushing the envelope further with a comic about NY Times columnist Maureen Dowd in a high action game of cat and mouse vs Dick Cheney’s goons while trying to make her date with George Clooney, another title called Gangster Rap Posse that creates a fictional narrative about everything NWA said they were doing in song being completely literal or Blades & Lazers which is literally an off planet monster fight about a guy with a blade and a guy with a lazor. Marra’s stories and visual narrative follow the logic of cheesy 1980’s action films in it’s earnest ridiculousness but there is a lot of smart satire and commentary in there about America if you look a little bit harder.

“Benjamin Marra is an artist who lives in  the city. He is utterly and completely passionate about art. ‘Art…consumes me’ sayas Marra ‘It is a part of my soul. When I look at a painting on the wall and see a brush stroke, I can see the universe in it. I spend a lot of my time in galleries and museums looking around at the artworks. I like to see what’s going on in the art scene, you know, see what the new concepts are in art, see what my colleagues are up to’” from Night Business #3 about the author bio

A Benjamin Marra comic isn’t afraid of being what it is because he got over that fear by making these comics in the first place. They are brutally honest in every way including how it reflects the real world. Having Maureen Dowd get into a shoot out with hired goons or having a gangster rap group kill everyone inside a skin head punk concert is ridiculous but that’s also kind of the point; chiefly that just because this representation is ridiculous doesn’t make any other more common false narratives any less ridiculous just because they are presented in a more formal way. Another way of putting it: it’s a comic and they are supposed to be ridiculous on some level but if you examine this with a certain school of thought  the world being presented in said comics is reflective towards beliefs that permeates a large swath of public perception. Like of course taking what NWA say at face value is stupid but there is a large population of the United States that thinks that all that shit is true. That’s what transcends Marra’s comics from just satire to something more but it also doesn’t change the fact that on a base level they are straight up awesome and hilarious at a 100 MPH. In short his comics aren’t good or important in the traditional usage of those terms; instead they are truly special and intelligent in a way that really no other comic is. By doing the type of work he’s done he’s making important comic’s in spite of himself and that is a beautiful thing.