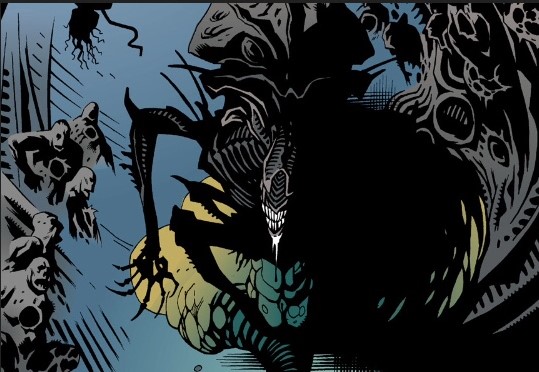 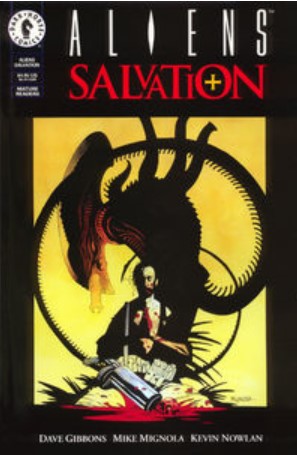 This seems to have changed in our time when Image Comics is all the rage but for most of comics history it was uncommon for a writer or artist to be defined by their creator owned work but for better or worst that’s been the case for both Dave Gibbons and Mike Mignola. Gibbons is the illustrator of The Watchmen and his work on that book has completely overshadowed the majority of his decades long career. It’s not the worst thing to be known as the guy who drew the consensus greatest comic of all time but it’s still pretty amazing how much of his work has been overlooked including stuff like Martha Washington with Frank Miller, a Superman story with Watchmen writer Alan Moore, the recent Secret Service with Mark Millar that is coming out as a film this fall or any number of the countless writing or illustration work he’s done on such iconic characters and titles like Captain America, Green Lantern, The Flash, Worlds Finest, The Hulk, Star Wars, Dr. Who, 2000 AD & The Spirit among other. In contrast Mike Mignola is someone who did work for hire illustrations for the much of his early career before he hit with his creator owned Hell Boy series that would expand into a whole new comics universe that’s managed to last over twenty years while showing no signs of slowing down. You’d be forgiven if you weren’t aware that Mignola did some of the most dynamic artwork for DC in the late 1980’s including the else worlds Batman: Gotham by Gaslight, the all time classic event miniseries Cosmic Odyssey with writer Jim Starlin or contributing interior art on John Byrne’s classic Superman run. Still in spite of this impressive bibliography Gibbons and Mignola appear to be destined to have their careers defined by two of their own creations in spite of everything else they’ve done. So you probably didn’t realize that both Gibbons and Mignola share a comic to their credit that you probably never heard of because nobody ever talks about any of their work that isn’t Watchmen or Hell Boy respectively but that doesn’t mean you shouldn’t seek it out because in spite of what you haven’t heard Gibbons and Mignola’s Aliens: Salvation is every bit as awesome as you’d expect from these two names as a comic that manages to capture the spirit of it’s intellectual property while still creating something that is distinctively in the voice of it’s creators.

Gibbons & Mignola’s Aliens: Salvation was released in 1993 at what was sort of a crossroads in both creators careers. For Dave Gibbons it was an early opportunity for him to begin his writing while going back into work for hire comics as well as one of his earliest collaborations with Dark Horse. Mike Mignola was one year away from his first issue of Hell Boy and had yet to establish himself and the superstar creator having mostly done work for hire illustrations at DC Comics. They hopped on an Alien comic based off the film franchise one year after the third film in the series was released to wide spread disappointment from critics and audiences alike. Darkhorse comics was still a young publisher at the time as they were walking the line between creator owned and licensed properties to drive their catalog much as they are today and the Alien comics were one of many books they published based on 1980’s sci fi/action franchises like Terminator, Predator, Robocop, Terminator vs Robocop or later on the OG Alien vs Predator. On Aliens: Salvation Dave Gibbons handles the writing while Mignola tackles the art in a story that’s loosely based around the second film in the trilogy. I say loosely because to my knowledge it has literally nothing to do with the film outside of it featuring Alien’s. In it, a ship has crash landed in a jungle of an unknown planet where we are shown the point of view from a fundamentalist Christian cook as he is paired off with a PTSD suffering marine general and later a beautiful female android. It has a sort of Heart Of Darkness vibe as we watch the protagonist descend into madness the more desperate he get’s for survival against the looming threats around him. Most of the book is driven by internal dialogue and illustrations as 90% of the writing is essentially one man praying. Dave Gibbons can lay it on a little thick in that regard but it’s an interesting concept that predates the film Prometheus in how it explores the questions of religious faith within a larger and far more dangerous known universe for humanity then the one we currently understand. Mignola is not fucking around on these pages as this is Cosmic Odyssey level art quality in the interiors where he creates a fantastic contrast between the lush jungle and dark actors within the comic. Mignola’s work here could be viewed as either a transition or last hurrah as it’s almost like a bridge between the cosmic space opera of his most notable DC work and the action/horror style that would define him via Hell Boy and it’s ever expanding line of titles. You’d think that Mignola could draw a creepy as fuck Alien based of the film series but you have no idea how creepy until you actually see it.  Alien: Salvation ends up being some of the strongest work from both Gibbons and Mignola respectively in terms of quality and craft so it ultimately begs the question, why haven’t more people read it? 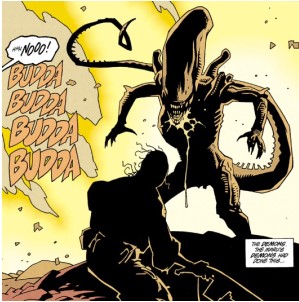 When Eric Stephenson called licensed books “not real comics” it had to sting a little bit partially because that’s more or less the accepted wisdom of comics at large. Licensed books don’t help in that regards as they are often mediocre comics by mediocre creators that lead to mediocre sales and ultimately indifference. For their part Darkhorse has always tried a little bit harder to make their licensed comics stand out from the fray like when they published a Terminator vs Robocop series by Frank Miller and Walt Simonson around the same time as this comic all the way up to today when they’ve stuck bigger creators like Brian Wood, Ryan Kelly, Matt Kindt, Gabriel Hardman and Corrina Bechko on their Star Wars properties before losing the licence to Marvel. But theirs a reason that Terminator vs Robocop or Alien: Salvation isn’t mentioned among their creators best work in regardless of their inherent quality and that’s because in spite of all the best efforts and good intentions most comic readers don’t care about that stuff. I was likely nine years old when this comic was coming out and I can tell you right now that I never took a second look at comics featuring Star Wars, Terminator, Alien & Predator stories and I loved those all of those movies. At that age I literally wanted to be the teenage John Conner from T2 when I got older in a few years about as much as I wanted to be a rapper or a quarterback for Notre Dame which was essentially more then anything. Granted I had no idea who Mike Mignola or Dave Gibbons where let alone had even heard of Watchmen, I was just buying comics for the cover and character mostly. Obviously that’s changed and it’s easy for me to tell you in hindsight that Alien: Salvation is worth your time as much any other more notable comics from it’s creators but that only came after I managed to shake off the “not real comics” mindset that I was carrying around for the majority of my life for licensed properties. In the age of creators driving the market it would probably be nearly impossible for a comic like this to be ignored though it would also be nearly as difficult to get creators of that quality on a comic like this as well. No matter how much things change some things stay the same and if were looking at sales, media coverage or award nominations it’s pretty clear that licensed properties still lack the respect of their legacy superhero and creator owned peers. For better or worst comics like this remained lost in continuity because of a general apathy from comics at large towards the books. But pay attention because for all the crappy comics that come out based licensed properties; occasionally there’s gem out there like Aliens: Salvation that works as both an artifact from comics past, a snapshot of two hall of fame creators styles and a great all around comic. Alien: Salvation is the gem worth digging for.