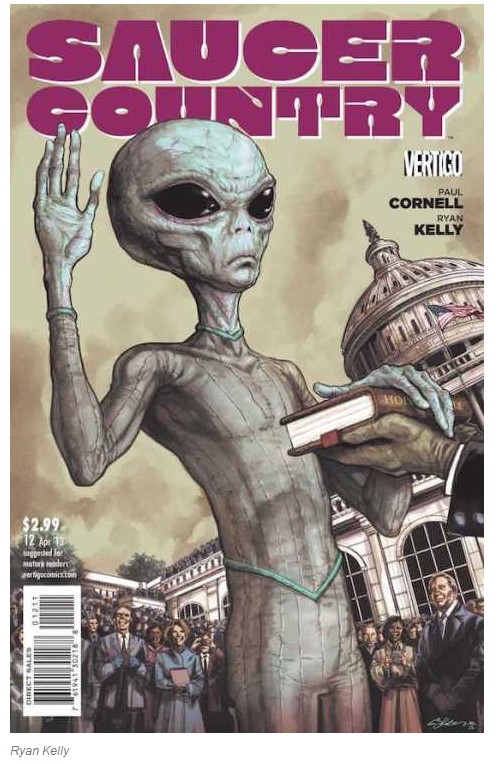 In recent years, DC’s Vertigo imprint has lost a bit of the sheen from its acclaimed run in the 1990s. Originally launched in 1993, the brand built on existing titles, such as Sandman and Hellblazer, to cultivate a line of titles which could, more or less, stand independent of DC’s superheroes in both form and content. This strategy was an immediate success. In the following years, Vertigo published the likes of The Invisibles, Preacher and Lucifer; their name quickly became synonymous with the cutting edge. However, as it often does, time can dull what was once trendsetting. Vertigo still produces some excellent comics, such as The Unwritten or The Sheriff of Babylon. Another example would be Saucer Country from the team of Paul Cornell and Ryan Kelly. Saucer Country was a deep dive into the heady realm of UFO mythology. Writer Cornell deftly avoided many of the common traps of the genre, keeping the reader on their toes while maintaining their engagement through compelling characters and themes. The series returns to shelves this Wednesday, after a four year hiatus; first though, an examination of what made the first volume of the title so memorable.

Saucer Country centers on Arcadia Alvarado, the governor of New Mexico. Her father had been highly active in community and state politics, yet never succeeded in winning the governor’s mansion for himself. Arcadia has spent her life following his example, working in grassroots activism before gaining the prize which always eluded him. In many ways, she sees her success as reflective of the growing political strength of the nation’s Hispanic population along with social strides made by women in general. She believes the moment has come for voters to break two glass ceilings with a single stone. Saucer Country premiered in 2012, and it is easy to see many of Arcadia’s characteristics mirrored in the biography of then President Barack Obama, even if Obama’s name is never raised in the series itself. Indeed, when Arcadia is running the incumbent in a fictional white male Republican named Wardlow. In some ways, Saucer Country adopts an assumed narrative of social progress which is no longer taken for granted. It also reflects a level of civility which has since almost entirely dissipated from public life. Which is not to say Cornell ignores the specter of racism, he simply leaves it between the lines of Arcadia’s opponents’ speeches. This coded language fails to ignite the populace however, leaving the implication that the election turns on a more clear-eyed view of the nation’s economy.

Saucer Country, as its name suggests, has more on its mind than the frantic pace of a contemporary presidential campaign. The night before Arcadia declares her candidacy, she goes for a private drive with her ex-husband Michael. Despite their marital breakup, the two remain close and Arcadia believes it only fair to warn Michael of what is coming. Before she can, they both experience something which they come to believe was an alien abduction. As Arcadia gains greater composure about the event, she interprets it as a warning. Something menacing is in the works. This belief in a hidden peril to the country adds even greater fire to her drive for higher office. There is also the increasingly nagging question of how many of the answers to so many decades old questions will be available to her after the inauguration.

From here Cornell could have turned in a straight-forward science-fiction paranoid thriller along the lines of The X-Files. Audiences would have been ripe for it, as pop culture’s fondness for government conspiracies did not end with the Clinton years. This element is indeed at play in the series, though, mostly on the fringes. Instead, Cornell presents various subgroups jockeying for prominence within the UFO community. On one hand, there is Professor Kidd who uses psychology and sociology to decipher what is really occurring. One the other, the Bluebirds place their faith in “nuts and bolts”, rejecting the more fantastic aspects. For them, aliens are not gods to guide or demons to punish; they are fallible creatures, like us, but with superior technology. Copy that tech and the playing field is even. Professor Kidd sees something deeper at play about the human psyche. What can these beings, whatever they may be, teach us about ourselves? Meanwhile a psychologist, Air Force major and radio talk show host seem involved in a type of anti-government cabal, which might also be connected to an attempted assassination of Arcadia. Oh, and, yes, Men in Black do eventually pop-in for a chat. Plus there is that other abductee who claimed President Wardlow was himself an alien.

Cornell deftly keeps all these plates spinning without his narrative ever taking sides of one against another. Indeed, each time one “truth” appears to be gaining prominence, Cornell deflates it with a rational explanation. Men in Black? A military hazing ritual. Only what about those men in dark suits who do seem to disappear into thin air? In the end, Cornell keeps circling around how belief is defined. The Bluebirds preach experimental science, yet their organization is built around founder who may be more L. R. Hubbard than Albert Einstein. Throughout the series, characters are confronted with alternative explanations for phenomenon they could have sworn were genuinely alien. As one character relates, sometimes people stage things simply to ^^^^ with your head. Of course, as the adage goes, just because you’re paranoid doesn’t mean they are not out to get you.

At the end of the day, Cornell is more interested in what all these stories say about people culturally. It is this thread that makes Saucer Country more compelling that a simple conspiracy yarn. Arcadia and Michael are left deeply scared by their close encounter. They both attest to being anally probed, a plot point that Cornell never plays for laughs. Instead, it’s used as an entry for a serious tackling of emotional trauma. Michael, already a troubled individual, is deeply shaken. He drinks and has dissociative flashes. Arcadia’s composure is steadier while internally struggling with the memory. She neither caves in, nor represses it and is a stronger character because of this. Here the science-fiction tropes are simply a way of raising very real psychological questions. In one issue, Michael tells Arcadia of when he and his sister Beth were young and played a game of fairies that involved demonizing their neighbor. Were the fairies real or were they merely a coping mechanism to address the neighbor’s abuse of Beth? Can the answer be “yes” to both? As Professor Kidd muses, “Why are these ‘aliens’ always about us?”

Series co-creator Ryan Kelly provides the art for the majority of the issues. He has a clear line which emphasizes the everyday aspects of the political scenes. At the same time, he is good at rendering the story’s more outlandish aspects, conveying both the wonder and horror of encountering the unknown. These two threads often converge in Kelly’s expressionistic covers. By blending the familiar with the fantastic, he creates an atmosphere which successfully channels Cornell’s scripts.

Saucer Country was not a huge seller for Vertigo, who canceled it after 14 issues. Towards the end of the series, some of the writing does feel a little compressed. Two-thirds of the series is spent simply getting to the first primary debate, after which the narrative jumps entirely over the rest of the campaign to Election Day itself. There is a sense that Cornell knew Saucer Country’s days were numbered and wanted his story to end in a specific place. With this in mind, the title does conclude satisfactorily, or as much as possibly given the number of lingering questions. Luckily, Vertigo released the rights back to Cornell and Kelly, which gave them the freedom to shop around for a new publisher. Thus, this Wednesday IDW will release the debut issue of the rechristened Saucer State from the same creative team. A lot has happened in American political and pop culture in the past four years and it will be interesting to see how it is or is not reflected in Cornell and Kelly’s new work. Regardless, Cornell and Kelly will surely have more to say about how aliens offer a mirror to our own nature.