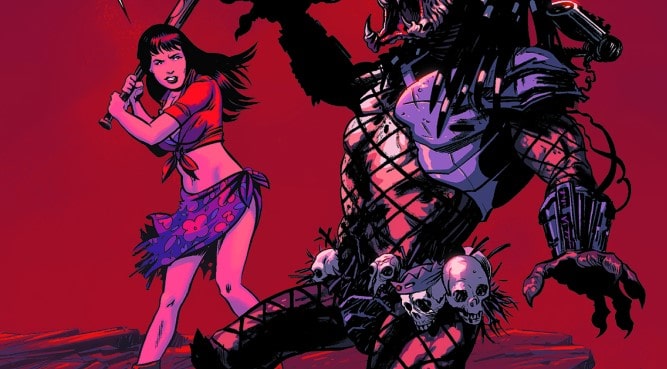 Advanced Review of Archie Vs Predator #2 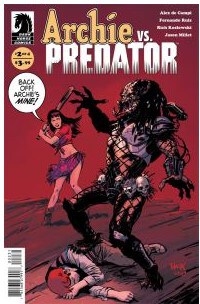 Think back. Can you remember a time before you mixed bacon with ice-cream? You probably thought, “Eww. Those two don’t mix. I am not at all interested in that.” Well, do you remember that one time you did try it and it was the greatest thing your lips have ever touched? It was something you didn’t even know you wanted and now that you have the taste it is all you want. What? You have never tried bacon with ice-cream…strange. Archie vs Predator is my bacon with ice-cream. This is a book I didn’t know I wanted. I mean, I have fantasized multiple scenarios in which the whole Archie gang would meet their campy end. However, I was not aware until Archie Vs Predator that watching this gang be ripped apart by a Predator is exactly what I wanted. If you have not left your computer to start making bacon and ice-cream, then read on. No spoilers ahead.

We all remember what happened in issue #1 right? Betty and Veronica’s constant competition for Archie’s heart reached a violent high. They both realized the best way to a man’s heart is through cleavage. After competing in a fashion show the girls got into a fist fight with each other, which ended in Betty running off and cursing Veronica. When I say “cursing”, I mean she put a curse on Veronica, she didn’t use profanity, this is a family book people. The curse has released the Predator on Veronica. If I have learned one thing from issue #2 of Archie Vs Predator it is to stay a safe distance away from Veronica, otherwise there is a good chance your head will be blown off. 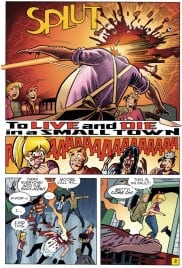 Betty and Veronica take a trip to visit Sabrina in this book. I know that everyone is very excited about the new Sabrina book that takes six months to come out, but for me, I prefer the Archie world Sabrina. This goth chick is exactly what the story needs. A teenager who is confident in who she is and not afraid to show it. It is not just Sabrina who provides entertainment in this book, it is the whole Archie gang. How many times have you sat there and rolled your eyes at an Archie character? Well, good news, with this book after you roll your eyes at them, a large blade will be shoved through their midsection. This is a great book to teach your youngsters at home. “See, if you are a foolish teenager, your insides will spill all over the pavement.” A book full of life lessons and humour. There are actually quite a few jumpy spots in the book as well. I attribute this to the disarming of the lighthearted banter, quickly followed by blood spatter.

I was unaware that it is so satisfying to watch these characters get hunted down by a Predator. Alex de Campi is really tapped into the Archie characters, which makes things that much better. I am also going to say she is tapped into the Predator character as well. This sounds strange because as long as the Predator is taking lives, it is pretty easy to be tapped into him. However, if you remember the first issue, the predator has this emoji gauge when he is stalking his prey. The emoji gauge might be my favourite part of the book. Of course the Predator thinks in emoji’s, how else would he communicate? It is the universal language. (Side note, what if the universal language was emoji’s? Scary!) I can’t wait to see what emoji’s come up next… I mean in the book, of course.

This is a book I didn’t know I wanted. Now that it exists I can’t help but think what other kind of creatures do I want to crossover and kill the Archie characters. Or, are there any other groups of characters I want to see “taught a lesson”. Below is a list of just a few of the crossovers I would love to read.

Archie Vs Alien – Stick a face hugger on Jughead and have him make light of the situation. Then after his stomach rumbles and he makes some ridiculous joke about being hungry BOOM! an alien rips through his stomach and terrorizes Riverdale.

Archie Vs Terminator – Arnold is sent back by future Veronica to end Archie for picking Betty.

Archie Vs Jaws – The gang decides to take a nice beach trip. Reggie falls down water skiing and is brutally torn to pieces by a 30 foot Shark. With a damaged boat the gang has to play open water with a killing machine.

Glee Vs Jurassic Park – Let’s see if there is a mess these kids can’t sing their way out of. Don’t stop believing…until that Raptor eats Mr Schu, then maybe stop believing and start running.

Two Broke Girls Vs Hannibal – The only image I have in mind is Hannibal eating those girls in their own diner and saying, “Mmmm Caroline is delicious, I was afraid she would be spoiled”. How we get there is just semantics.

Keeping up with the Kardashians Vs The Power Button – Someone actually turns off the TV when this show comes on.

Have any suggestions of crossovers like Archie Vs Predator that you would read?

This book is a lot of fun. Make sure you catch up in #1 and pick up #2 when it hits stands next Wednesday, May 20th. 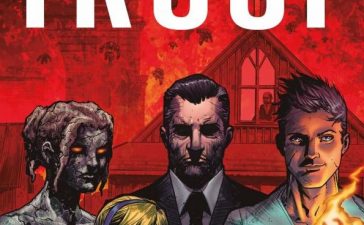 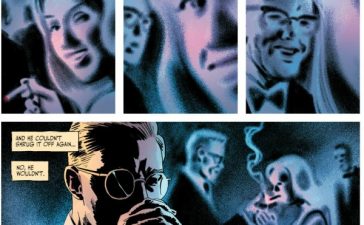