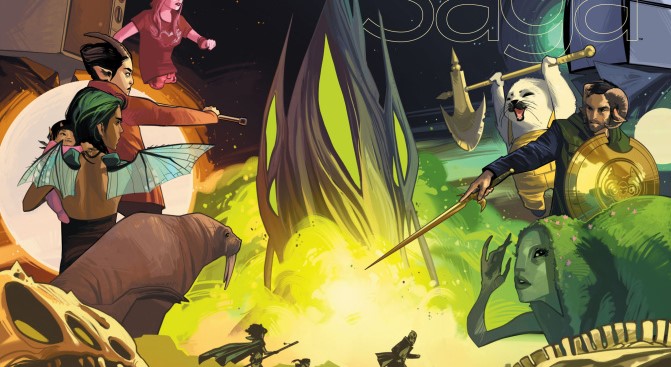 A popular store to shop in this holiday season is Chapters. I have been in a few times this season shopping for my family. Chapters is the Canadian version of Barnes and Noble. They have a good comic book selection but I rarely buy comics from there, I prefer to support my local shop owner. One of the first things you see upon entering the store is their best seller wall and this holiday season it shocked me to enter and find Saga volumes 1 to 5 sitting right front and centre on the best sellers rack. I understand Saga is a big deal, but I dabble mostly in the comic book world. I had no idea I would find Saga on the best sellers rack of Chapters. More importantly, I didn’t find Saga Volume 1 on the best sellers rack, I found volumes 1 to 5. Sure, you may pick volume 1 up for your nephew one Christmas, but you can be sure he is coming back for volumes 2, 3, 4 and 5. Saga is addicting. It is the gateway comic. The year 2015 marks the release of Saga issues #25-#31 which comprises volume 5 plus the beginning of the next arc. The epic continues.

A lot of very strong books came out of Image Comics this year. My list of the top books of 2015 contains mostly Image books with a few DC and Marvel splashed in. These books excel in different areas. Shutter has fantastic art. East of West has a compelling plot. Manhattan Projects is extremely funny. Black Science has rich, enjoyable characters. While all of these books do share some of their strongest attributes, Saga has them beat at every aspect. Saga is the best looking, most compelling, funniest book of the year and it is loaded with some of the best characters in comics. At it’s core this book is about family. It is about the struggles a couple will go through, it is about the relationships we have with our parents, it is about bringing a child into a hopeless world and it is about learning to lean on others for strength. As we peel back the layers this is also a book about war. In war there is no good and evil, there is no right and wrong. There is only blood and pain. Pain for those giving their bodies to the cause and more importantly pain for those left at home worrying about their loved ones. The world is at war. Whatever side you are on dictates who you hate in this life. In war there are no individuals, there are groups and if you aren’t in the right one you better hope you brought a gun.

Saga starts off the year with Alana and Marko physically separated. Alana is with a rogue janitor, Dengo, from the Robot Kingdom looking to make a statement to the royal family. His son died from a treatable illness and he thinks the nation should be more worried about their own people instead of fighting a war they have no stake in. Issue #25 opens on Hazel explaining that the war started between Landfall and it’s only moon, but eventually it stretched out to the galaxy. Now the war is everywhere, except on Landfall and its moon. The rest of the world is so concerned about fighting this war they fail to see that back on home soil there is no quarrel any longer. So, Alana is with Dengo, Hazel, Klara and Friendo stranded on a planet with no night, meaning no Isabel, the ghost babysitter. Marko is with Prince Robot IV and Ghus tracking the whereabouts of Alana and Hazel. Ghus is able to feel Friendo’s energy, so they are able to set a course in hopefully the right direction. This leaves one more group of characters; Gwendolyn, Sophie and The Brand are off searching for a way to heal The Will. They are on the planet Demimonde where they must collect dragon semen to bring The Will back to health. Three shuffled up groups will have to fight for their survival. Marko and Alana are apart for the first time in the series and they go through some big struggles. 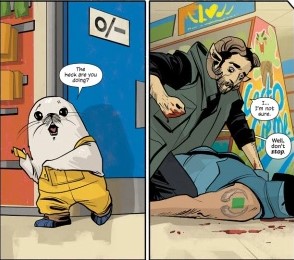 Marko and Alana were going through some tough times last arc. They ended up getting in quite a big fight, right before Alana and Hazel were taken by Dengo. The whole arc is about their reuniting. Marko’s journey is centred around his violent nature. He is constantly going back and forth. He often refuses to use violence in anyway, but then the next panel he will be beating the snot out of someone. Marko is afraid of the violence inside of him. He is afraid he will hurt the ones near to him, so he pushed them away. His wife Alana also made the same pledges to never use violence, but she needs to do something to save her family. Marko struggles through his personal journey and eventually comes out the other side embracing his violent nature and vowing to kill the man who stole his daughter. Alana on the other hand has a few opportunities to kill Dengo, but she attempts to use her brains to get out of the situation, even if the end goal of using her brains might be to jab a shank in his neck. It is easy to see that no matter what kind of struggles these two had together, they are a complete mess apart. Eventually Alana reaches the point where she has Dengo’s life in her hands. Her frustration levels are through the roof as Dengo’s stupidity lead to Hazel being taken again. As hate fills her eyes she gets ready to end Dengo, but Marko arrives in the scene, finally finding his wife. He tells her he wants Dengo dead too, but that just isn’t who they are. They embrace in the most heartwarming moment of the year and we feel the emotions rush over as our favourite couple is back together again. Quickly that vanishes as we remember the parents may be back together but their child is now gone.

While all of this is going on Gwendolyn, Sophie and The Brand are getting the dragon semen. As usual Lying cat is utilized for a wonderful moment, this time telling The Brand she is a great woman. However, for me it is Sophie who steals these scenes. She is grown up now and it is hard to remember all the shit she has been through. It is fantastic to see her using wits to help everyone escape from the pack of dragons. Sophie wants so much to be the hero of the story that it gets her in some big trouble. They eventually find the last male dragon on the planet who is minutes away from finishing up a date with himself. As he drifts off to sleep Sophie runs down to collect the discharge. The dragon wakes up and as The Brand runs closer to save her, the dragon bites The Brand clean in two. As Gwendolyn finishes off the dragon there is nothing left of The Brand but legs. It is evident the amount of guilt that Sophie is facing as she must tell her rescuer, her saviour, The Will that not only is he in the hospital bed because of her, but now his sister is dead because of her. This is the setup for a beautiful moment between The Will and Sophie, but BKV surprises me and takes it in another direction. Sophie tells The Will that The Brand died saving him and it should have been her who died, The Will says, “You selfish little cunt!” He curses them out of the room and it is clear, a monster has been unleashed. This scene was a complete shocker. We had barely any background on The Will and The Brand but clearly The Will naming Sophie after his sister was a big deal. 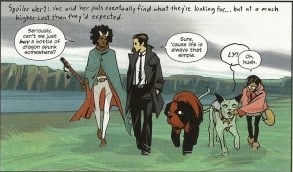 Saga was again wonderful this year. I hope you are buckled in because this journey is just getting started. Watching these characters grow over many years has created a strong connection. Seeing Sophie and Hazel grow up and watching Alana and Marko drift apart and find their way back. This book is all about the family. I read Saga because I care what happens. That is why Saga is the best comic book on the shelf, because it opens up an opportunity to care and invites you along for the ride.

Oh, and because Ghus wears a onesie.