Hello, and welcome back to another Ninja Turtles 2003 episode recap. When we last left our four heroes, they had just destroyed Stocktronics with the help of April O’Neil and were just settling in to their new home. With that, let’s just jump right in.

The episode opens with Mikey and Raph sparring. Mikey is using his favorite tactic: taunt Raph and dodge. I really like this sequence. While he isn’t as disciplined as Leo, Mikey is the most naturally talented. He’s able to recognized his opponent’s weakness–in this case, Raphael’s hotheadedness–and use it to his advantage. Unfortunately for Mikey, this backfires. He got Raph so angry that he lost control and went at Mikey with a metal pipe. Leo intervenes before the situation gets out of hand and Raph heads topside to clear his head. Meanwhile, a certain hockey mask wearing vigilante is watching a news report on the rising crime wave. He takes his gear and leaves. On the streets, a woman who looks suspiciously like April wanders into a dark alley.

I’m not sure what the implication of having a character model resemble April is, if there is any. I just found it interesting. Anyway, the woman is surrounded by a gang of Purple Dragons. Just before Raph goes to intervene, Casey shows up. He sits back and watches until it looks like Casey will go to far. Like in the comic this episode is adapted from, they duke it out, and Casey sucker punched Raph and gets away, but not before challenging him to a brawl in Central Park.

Meanwhile, at the lair, Mikey accidentally discovers an ancient, alien-like elevator that leads them to a long empty warehouse. This elevator is the first sign of there being a larger mythos. One thing I really liked about this series is that it’s really epic in scope. It’s written like, well, a comic book. We have the main plot of the episode, plus the mystery set up by the elevator. While the Turtles only actively investigate it a little, the explanation makes the world that they live in seem larger and more complex.

Raph returns home and explains what happened. He and his brothers decide to sneak out, but are caught by Splinter. He lets them go, giving them the idea to supe up the armored car. They get to work and finish up in time to meet Casey in Central park. Raph and Casey resolve their differences and are ambushed by Purple Dragons. The rest of the Turtles rejoin them and a fight scene ensues. They, of course, win the battle, and Casey and Raph become the brawling buddies we all know and love.

This was a fun episode. The action was really good and well animated, as usual, and it was a pretty good introduction to Casey Jones, the nut. He and Raph played off of each other well, and they both had nice character arcs. 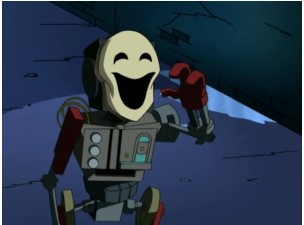 The episode opens with a scientist, Dr. Marion Richards, experimenting on some nanotechnology. She gives it a toaster and an alarm clock to disassemble and reassemble. Instead, it creates a body. Annoyed that it’s “personifying again”, the doctor leaves. I will never not be amused by the scientist’s reaction. Ugh! I just created an artificial intelligence that appears to have thoughts and feelings independent of its programming. That’s definitely not a major scientific breakthrough. Well, back to the drawing board.

Shockingly, the super intelligent robotic hive mind escapes, and stumbles upon Harry, a small-time pickpocket. Harry, realizing that the robot has the intellect of a lonely three year old, adopts Nano and uses him to go on a crime spree. When he decides to rob April’s shop, Casey and the Turtles intervene. Casey is hurt in the fight, and Nano escapes with Harry. The Turtles track them to a junkyard. When crushing Nano in a car compactor doesn’t work, Donatello traps it with the junkyard’s electromagnet. Harry cuts the power, not realizing that Nano was right over the furnace. The robot goes in, and seemingly dies. The Turtles return to April’s shop, only to find Casey and April fighting like an old married couple.

Of the episodes I’ve talked about so far, this one’s my favorite. Nano is one of the most tragic antagonists in the series. It has the mind of a child, and is only a villain because it’s taken in by the wrong person. Every character, save for the scientist, is sympathetic to a degree, even Harry the pickpocket. He took in Nano because he saw the little robot as a meal ticket, but, at the end, it looks like he grew to care for it. Nano will appear again, and will get a happy ending, but those are stories for another time.

Darkness on the Edge of Town

The episode opens with the Turtles messing around in the lair, with Leo on a scooter, Raph on rollerskates, Donnie on a bike, and Mikey on his skateboard (available at a any Toys R Us near you). The power goes out, and they go to investigate. They stumble upon a robbery in progress at the Metropolitan Museum of Art. The Foot are after a sword that releases a concussive energy blast. The ninja escape, but Mikey grabbed the chest insignia off of one. They show it to Splinter, who goes to meditate on it. He forbids the Turtles from investigating further. They, as usual, find a way to weasel around it. They can’t investigate the ninja, but Splinter didn’t say anything about the blackout.

Meanwhile, the sword is brought to Shredder, who discusses with his right hand man, Hun, how the sword will be used to find the enemies that he “has hunted for so long”. He calls for the Foot Tech Ninja.

The Turtles’ investigation leads them to the docks, where the Foot are using the blast from the sword to hunt for an artifact. They fight the Foot on a pirate ship and win, but the Foot Tech Ninja escape with the artifact, leaving the Turtles to take the sword. They give it to Splinter, who says that it’s unlike anything he’d ever seen. And so the episode ends with the Foot Techies identifying the Turtles for the Shredder. He swears that he will end those “freakish thorns in his side”.

We’re getting into the major conflict between the Turtles and the Foot. It’s a bit of a slow reveal–we don’t find out that it’s the Foot for another three episodes–but it’s still fun to see them duke it out. It was a bit unnecessary to have the Turtles spend several minutes playing with their bikes and skateboards and whatnots, but hey, you gotta sell toys. I know that when I was in first grade, I was proud of my scooter because Leonardo had one. Aside from that, it was just another really fun episode with some great action. I mean, who doesn’t love a good fight scene on a pirate ship? 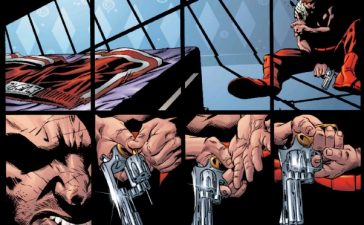