I forget what first drew me to the Spirit as a character. I must have read about him somewhere or heard about the movie. But I do remember picking up the Darwyn Cooke’s run along with The Best of the Spirit, a collection of Eisner’s best tales. Those three volumes reeled me in to the world of the Spirit. And, when it comes to post Eisner Spirit, nothing compares to Darwyn Cooke.

Cooke’s The Spirit, is wonderfully anachronistic. He knew exactly what needed to be kept in the tradition of Will Eisner and what needed an update. It’s set in the modern era, yet maintains a noirish aesthetic, creating a work that’s both stylish and fun. 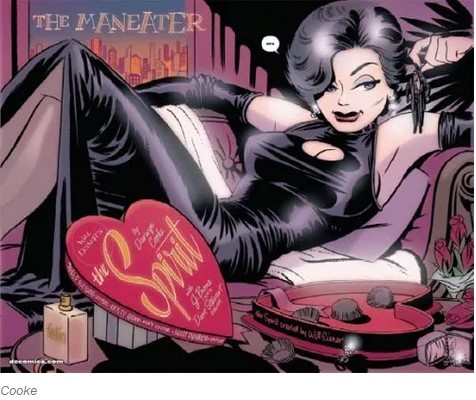 He had an ear for snappy, funny dialogue, especially from Ebony White. Will Eisner was ahead of his times when it came to constructing a scene and characters, but Ebony was a reminder that Eisner was still a man of his times. Cooke managed to turn the cringiest character of the Spirit mythos into a fun and engaging cast member. Ebony is a kid, and he acts like one, but he isn’t annoying. Circumstances made him mature beyond his years, and he carries the maturity with a hefty helping of snark.

The rest of the cast is incredibly engaging. I almost wish that Cooke’s run had lasted longer than two volumes.  Silk Satin was upgraded from a femme fatale to a secret agent with a belligerent relationship with the Spirit. She only appeared in two issues, but from what little we were given made me want more in a good way. I wanted to spend more time with this character. Another villain, P’Gell,  was humanized by going from a typical black widow to a woman on a quest for justice.

Ellen Dolan, a long time love interest of the Spirit, becomes more then that with Cooke. While this version of the Spirit was a shameless flirt, Ellen didn’t take it lying down. Despite the problems, she’ll still go to the ends of the earth for the people she loves, even facing down a zombie apocalypse with her ex fiance to save him. And, in ten issues she never has to be rescued by him or anyone else. In fact, she does some rescuing of her own.

The Spirit himself is engaging and a lot of fun. Like in Eisner’s original run, he’s snarky, friendly, and a keen investigator who’s willing to solve problems with his brain and brawn. Cooke could seamlessly slip from sharp satire to horror and make the Spirit fit in both like a glove.

But a hero is only as good as their villains, and Cooke’s revamp of the Spirit’s rogues gallery makes the trades worth reading just for them. The Octopus appears several times in all his shadowy, faceless glory. As one of the Spirit’s most iconic villains, Cooke had to have him make an impression, and it succeeded. Carrion, probably the strangest of the villains is a lot of fun.

The standout though, is Alvarro Mortez, aka El Morte. Mortez was with Denny Colt the night he died and was exposed to the same nerve gel. Unlike Denny, who was buried in his family’s crypt,  Alvarro was buried in a pauper’s grave, and died a second time before being resurrected by his mother. His fate and the Spirit’s seem to be intertwined and as the final battle draws closer together, the comic almost feels apocalyptic. The Mortez arc, especially the penultimate issue, The Day of the Dead, was Cooke at his best. The artwork is cinematic and apocalyptic. If anyone ever asks how color can set the mood for a comic, simply point them to this issue and Dave Stewart’s coloring. Throughout the series, the color red was associated with El Morte and his mother, symbolically cluing in the reader in that he and the Spirit, who is associated with the color blue, are opposites. As the battle between them wages, the art takes a turn for the Hellish.

Darwyn Cooke’s art is a perfect fit for the Spirit. It’s a mix of classic cartoon and modern, with all the fashion and glamour of old film noir set in the modern day. One of his greatest strengths is expression in the face and body. The way the P’Gell holds her body when confesses the motivation for her crimes, the affectionate body language between Argonaut Bones and his boyfriend, Kimball Richards or the look of shock and fear in Ebony’s face contrasted with El Morte’s smug grin. Even in shadow or at a distance, you could tell what a character was thinking or feeling. That, combined with his character work and sardonic wit makes his Spirit a more than worthy followup to Eisner’s classic run.