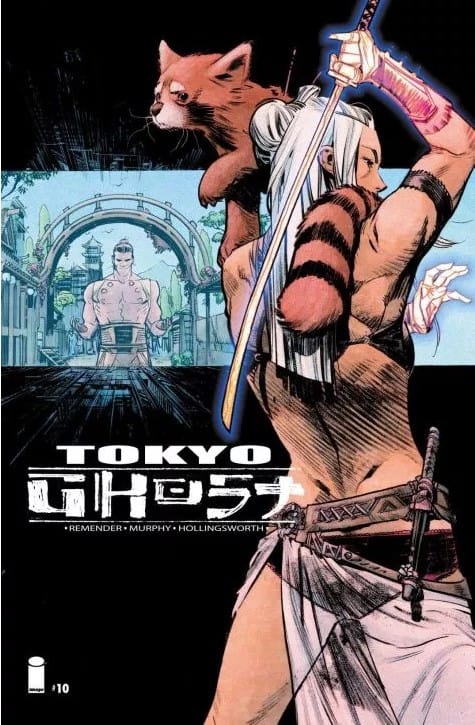 The eagerly anticipated and somewhat polarizing Tokyo Ghost ended on issue #10 with a comic that felt like a visually driven adult themed approximation of Stranger Things classic 1980’s film re-imagination. In other words, it ends about as best as it could all things considered.

Any conversation on Tokyo Ghost strength begins and ends with Sean Murphy whose lush and detailed illustrations hit another level in its scope and imagination. That is especially true in the series conclusion where Murphy’s work is almost never less then breathtaking and beautiful throughout. Much of what Murphy does here feels akin to a sort of nostalgic invocation of a past cyber punk aesthetic that was supposed to be out future. It’s gorgeous. 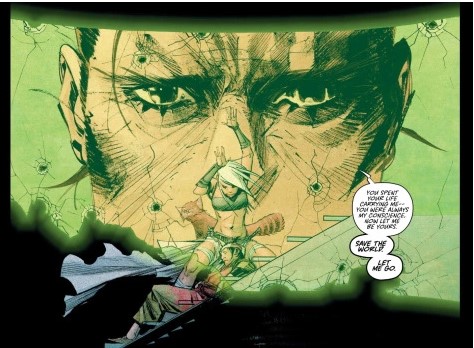 While not the most technically stunning of his work here, the panel above is almost a near perfect approximation of how Murphy has been able to adhere to a common idea and then morph it completely to his own style. It’s a panel with so much detail and life that it defies the two dimensional constrictions of the medium and feels like a living breathing image from it’s smaller components like the way Debbie’s shawl flutters behind her, the empathetic furrow of Led’s eye brows or the confused expression of the red panda. Oh and speaking of  red panda’s, don’t think Murphy isn’t bringing the thunderclap on more traditional comics pages 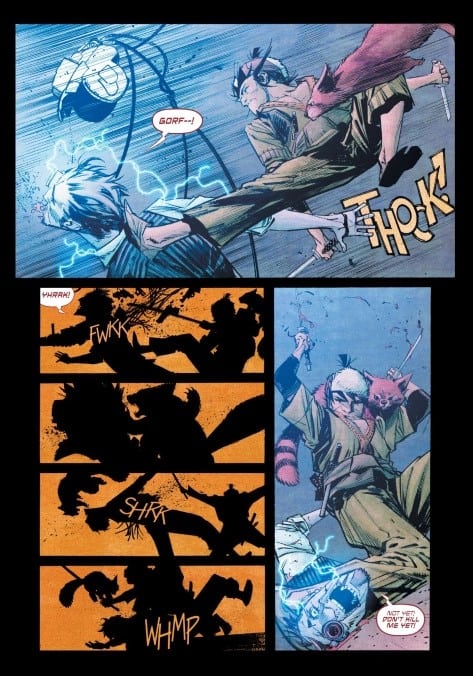 That right there is composition in visual story telling done near perfection with an extra adorable red panda scowl for good measure. Not to be forgotten, colorist Matt Hollingsworth is given an incredibly difficult task of finding pallet contrast in all of Murphy’s details but his naturalism gives the art a weight with it’s casual realism that grounds the book’s naturalism within it’s more fantastic elements.

But in Tokyo Ghost, the visual excellence has never been a debate. Instead, the books writing could often be it’s Achilles heel from some of Remender’s over use of narrative voiceover. Before anything else, it should be stated that Rick Remender has been one of this decades best and most creative voices in comics writing. With years of brilliant creator owned work and a classic Marvel series in Uncanny X-Force, his overall excellence is undeniable. Throughout his time in comics, there have been few writers with the breath of ideas and concepts that Remender possesses. Yet in the last few years, Remender’s work has suffered at time’s with it’s intense naval gazing exposition that felt like the writer re-appropriating his favorite NOFX lyrics. Tokyo Ghost felt as if it suffered the most from this with Remender’s muddled attempts to criticize our reliance on technology often feeling out of touch, meandering and distracting. There is still some of that in the series conclusion but to Remender’s credit, this issue takes a turn inward towards the personal and it represents some of his most impressive writing in years. The way he handles Debbie’s internal monologue is especially excellent in it’s affectation and insight. While the series as a whole would’ve benefited greatly from more of this from the writer, it’s better late then never with some of Remender’s most touching and heartfelt work in some time.

This is the type of comic that’s made for me, an issue that I instantly re-read as soon as I finished and then went page to page backwards and forwards to absorb all of the art. In theory; this is what you want from every comic all the time but that’s far from a reasonable expectations. Sometimes series jump out the gate impressive, sometimes they need time to find their footing and sometimes it doesn’t come together until the end. Tokyo Ghost is the latter of the three and while based on expectations that might not be ideal, considering the quality of this issue, it was well worth it.