To look across writer Jim Zub’s most popular comics work is to see a creator whose voice expands across genre. From Skullkickers to Figment to Wayward to Thunderbolts; Zub continues to show versatility in his subject matter. On Glitterbomb, with new comer illustrator Dijibri Morissette-Phan & colorist K. Michael Russell, Zub creates one of his most arresting and challenging debut issue’s yet.

Glitterbomb is a satire of Hollywood sexism mixed with Lovecraftian horror for a first issue that immediately hooks the reader in and never lets up. Zub does a subtle trick with the books story structure at the beginning and end that greatly aids in this but it’s the brutal honesty of his writing and character work in the comics middle section that make up the heart of story. Glitterbomb follows it’s protagonist, a former child actress, as she attempts to navigate the cutthroat world of casting agencies against her responsibilities of motherhood and the limitations of poverty. There is a transformation and the books complexity immediately shifts into focus. Morrisette-Phan & Russell do comics art that is grounded and creates a feeling of morose throughout. It’s all subtly normal from the outset until it isn’t and it’s the work of the art team in keeping the books thematics in check as the story shifts and evolves.

Just as a single story, Glitterbomb #1 is about as good as it get’s in terms of craft and enjoyment. If the series can make that consistent, the comic should no doubt have staying power in what is an increasingly crowded market for it’s smart writing and topical subject matter. Yes, it’s another new Image series but one that is well worth your  consideration for it’s excellence and ideas. 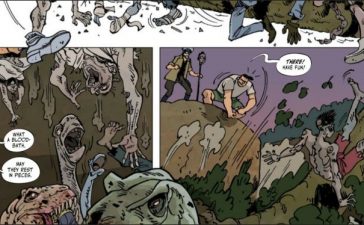