Advance Review of From Under Mountains #1 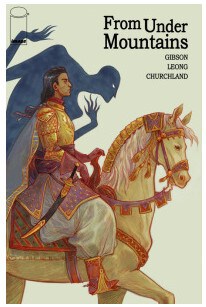 Brandon Graham’s new shared fantasy world 8house continues to expand with the introduction of spin-off title From Under Mountains. After a taste of the more science fiction flavored Kiem, readers are immediately plunged back into a landscape of spellcasting familiar from the Blood House of Arclight. The issue opens with a stunning wordless image, a full-page illustration of hands gracefully moving through space. The surrounding area is largely dark, fingers glowing red in a fire’s glare. Small leaves and flowers drift downwards. The perspective gradually expands over the next couple of pages, building the atmosphere without losing any of the mystery. It is a striking sequence by Sloane Leong, which immediately pulls the reader into a new landscape.

That territory is the realm of Karsgate, a mountain fortress which feels remote in more ways than one. During the course of the story, the Lord of the keep learns that a trusted ally may no longer be so loyal. Distant armies are rearranging themselves, while a shimmer of civic discontent runs through other scenes. Thefts are plotted, among others things. Then there is the matter of that spell in the opening sections. It bears fruit in the form of a ghost-like figure, bound to its conjurer for some unspoken purpose. There is a delicate balance in Karsgate which threatens to tip precarious into disorder.

Gibson and Churchland tell their story in an episodic manner, which lends the book the flow of everyday life. The night scene transitions into the dawn of another day, where the lord gives instructions to his son. The daughter sits dutifully at the table, frustrated that she does not receive the same free reign to experience the surrounding area. After this there is a scene in a commoners’ shop, before returning again to the higher orders. Gibson and Churchland arrange these scenes without any confusion, smoothly gliding from one to another. Much of this issue is simply people going about their everyday duties, yet, it is never boring. The writers have too sharp a sense of place and character to allow that to happen.

Reinforcing this intriguing story is Leong’s stellar art. Much of the mood of the comic is the result of her images. Her layouts may appear simple at first glance, but they are quite artful. For example, a transition from dawn over the mountain range to the light streaming through the fortress’ windows to a cropped close-up of woman’s eyes sets the scene perfectly. Leong has an eye for the small, telling gesture. She is equally comfortable, however, with the supernatural, as in the opening sequence discussed above. When the spirit creature returns later in the issue, Leong renders its attack in a vivid, expressionistic manner. (The strong coloring is by Leong as well).

Both Arclight and Kiem plunged readers into new surroundings, telling stories that relied as much on atmosphere as they did on plot. From Under Mountains continues that trend by inviting readers into a mysterious, compelling environment. And as with the others, I am left looking forward to future installments.